The Downfall of the Malays: UMNO's Divisive Population Engineering

The Malays are lost and waylaid and at the crossroads of a really serious Malay dilemma. 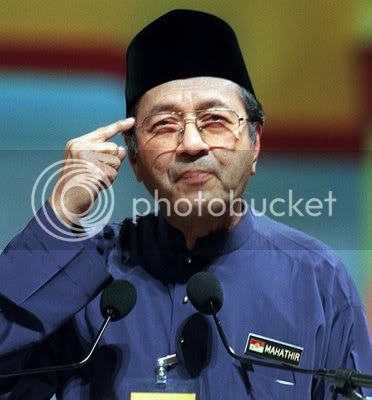 If you don't believe me, check this out.

If you happen to travel around this country and check on the statistics, especially the pasar malam, find out who runs the stalls and their businesses? Check out our beloved Chow Kit Road, and see who owns the thriving commerce? Or visit the Pudu wet market and see who is shouting for customers at 4 am (even before the cock crows).

Half the businesses now are with the foreigners, another half with other races, the Malays only have land titles left (especially reserve land of no value). All the GLC's are still in Malay hands, but not for long; otherwise all will be sold off in no time at all.

As a people, the Malays are not known for perseverance and enduring commitment. They have no business acumen. Being entrepreneurial is a steep climb for them and the Malays have no stamina to stomach the strains and stresses.

I speak from experience. They are easily swayed by circumstances.

More than half our local workforce are pendatangs (Indons, Myanmars, Nepals, Vietnamese, Banglas!)

This country is not only bankrupt as said by Idris Jala, but also - telah dilelongkan. The poorer of the majority Malays left behind will become beggars and mat rempit, mat gian, mat ragut and mat dadah (they are all subsidized by our government funding to buy their No 1 drugs of escapism to run away from a harsh reality - Metadon).
Who culled their own Malay race? Nobody but UMNO-BN itself! I rest my case.
Strategy of mind control 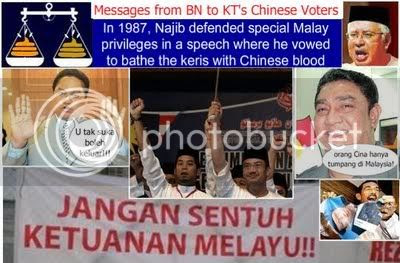 Since 1957 UMNO has effectively carried out the population engineering of our country to ensure its own long-term survival by creating the myth of a two-pronged “Ketuanan Melayu” strategy of mind control.

And while UMNO has failed by almost any measure you chose to gauge them – good governance, ethics or morality – without question they have succeeded too well in the social engineering exercise after the bloody race riots of May 13, 1969.

The duplicity of UMNO in proclaiming 1Malaysia - Satu Bangsa, Satu Negara -while all the while undertaking a relentless program to whittle down the numbers of the non-Malays through a very precise and focused political initiative is breathtaking in its effectiveness!

Over 600,000 Chinese and Indian Malaysians with red IC status were REJECTED repeatedly when applying for citizenship and possibly 60% of them had passed away due to old age.

– 3 million Indonesians came over to Malaysia to become Malaysian citizens with Bumiputra status even if they stay LESS than 5 years. (Nett gain 0.5 million and an additional of 3 million manufactured Bumiputras like Muslim Indonesians).

The most famous is none other than Mohd Khir Toyo who stayed for 20 years but became MB of Selangor.

Chinese population to dwindle and the Indon to rise

In the not too distant future INDONESION migrants, owing to the virtues of hard work and thrift taught by their parents, or grandparents, would have surpassed the majority MALAYS in terms of socio-economic progress.

Mohd Khir Toyo is smarter than most local-born Malays in terms of amassing his personal wealth at the shortest duration of time. Even Muhammad Muhammad Taib is no match for him. That's how smart Khir Toyo is.

Instead of teaching their people the virtues of hard work and perseverance, the UMNO warlords are proclaiming Ketuanan Melayu to feed off the Chinese minorities like parasites.

If not for the Chinese taxpayers, the Malays will be sleeping the five foot-ways.

Of course the Chinese isn't a threat - they are just workaholics - they want to create wealth and prosperity so much so that no failures of any kind is going to stop them. Not even the ultra Malay racists spewing blood in their eyes or frothing venom in their mouths.

That’s proof enough how steady and influential the Chinese economic stranglehold over the majority Malays will become; and we believe racial hatred and resentment is well likely to remain for the next 50 years.They work hard for the money but we envy them in our idleness.

Whereas the Indonesian newcomers went out to work BEFODRE you become awake and they are not home yet when you call it a day and went to bed. Will the majority Malays consider them a threat when they deservedly find new wealth?

The Indonesians respect the Chinese for their business acumen and diligence. Do the Malays think likewise if not indulge in unguarded jealousy and envy?
Best to lay the blame where it belongs - NOT the Malays, but UMNO

Now the non-Malays are well aware of this tinkering and engineering of our population and it would do us Malays no good to say that it was UMNO’s doing and that we had no hand in what happened at the end of the day.

As a Malay I was then comfortable that UMNO was the dominant partner in the Barisan Nasional. It was indeed comforting to know that Malays controlled four of the five major banks. We were also in control of UMBC, MISC and Southern Bank – all previously owned by the Chinese.

But seemingly the Chinese-owned Public Bank which is not in our control is moving ahead of the others still in economic prowess and competitive skills. What’s wrong with our control?

Of the total government budget for these schools, 2.5% were for the Chinese, 1% for the Indians and a whopping 96.5% for the Malay primary schools.
The fact that 2637 Malay primary schools were built between 1968 to 2000 implied that the engineered process of RETARDING our majority Malays or bumiputras is getting obvious.

At the end of their school lives, they have nowhere to go except to stay put in this country, as like idiots they have nowhere else to go because everywhere they are faced with a serious language problem and a communication breakdown with others.

They will, like it or not, have to support the Ketuanan Melayu concept to survive for their freebies or welfare. The mentality is - No need to work and money will still come.

Scions of the rich and wealthy UMNOputras will be educated overseas and return to continue to rule over their poorer local cousins.

Of the 2000 station the Malays owned 99%. Yes…we the Malays were indeed in control.

In control of what?
How come still poor with so much control?

So why with control over all these highly visible entities and business opportunities are the majority Malays still unable to stand tall and with pride over and above the non-Malays?

We are unable to so do because it was not the Malays that benefited from these opportunities - only the favoured UMNOputras enjoyed the benefits, and the poorer among the majority Malays were merely taken for a ride as their name were used by UMNO to hijack the national agenda.

The Chinese bogeyman and the Malay hobbyhorse work wonders for UMNO to play one against the other in their evil scheme of Divide and Rule to suit their survival plan.