To see PHOTOS of the KUALA LUMPUR BERSIH 3.0 RALLY... by Malaysiakini

5.15:  Jalan TAR - The situation in Jalan TAR appears to be calm after a FRU truck retreated. There is no police presence along the road from Maju Junction to Pertama Complex.

Some of the protesters could be seen heading back towards Dataran Merdeka.

The area in front of Bar Council building is now deserted as most of the protesters have dispersed.

But there are still protesters in two main areas - from Masjid Jamek to Dataran Maybank and those in Jalan TAR.

4.30 pm
A police vehicle allegedly hits two protestors in front of Sogo shopping centre, injuring them.
An angry crowd surrounds the police vehicle which has been abandoned, and overturns it.


4.00 pm: Those arrested are being brought to mobile unit at Selangor Club for processing.
Dang Wangi and Pasar Seni train stops closed.

3.50:
--Pockets of protestors have retreated from Dataran Merdeka along Jalan Tuanku Abdul Rahman and are being chased by police.

-- Water cannon and tear gas are fired at the crowd outside the Bar Council building at Lebuh Pasar Besar.
.


3.26:
Police say they are forced to fire tear gas canisters because the crowd tried to dismantle their barricade to Dataran Merdeka.

--Police HITTING and arresting civilians. All caught on video.

3.15:PENANG: Mexican wave performed by the 7000 people seated on the grass at the esplanade in penang.

3.00pm FRU  fire teargas at crowd near DBKL headquarters near Dataran Me

10.55 am:
-- Heavy police presence in Kg Baru area and Brickfields around the elephant fountain. 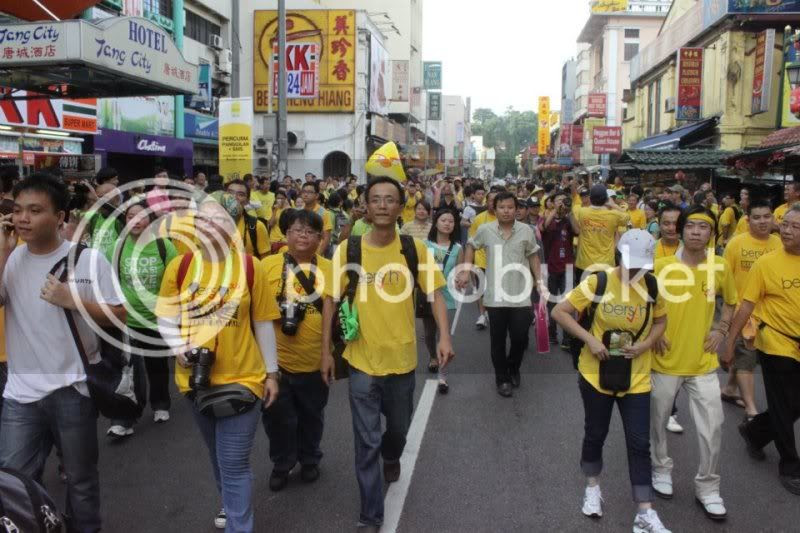 10.50:
Dataran Merdeka - The police human wall near the Bar Council headquarters become a tourist spot of sorts with many people taking photographs.

Jalan TAR: Students are gathered in front of 7-11, at Jalan Tar.  Youths are welcomed!


10.45: A crowd of 5000 trying to head from Sogo to Dataran was stopped between Masjid Jamek and Jalan TAR. 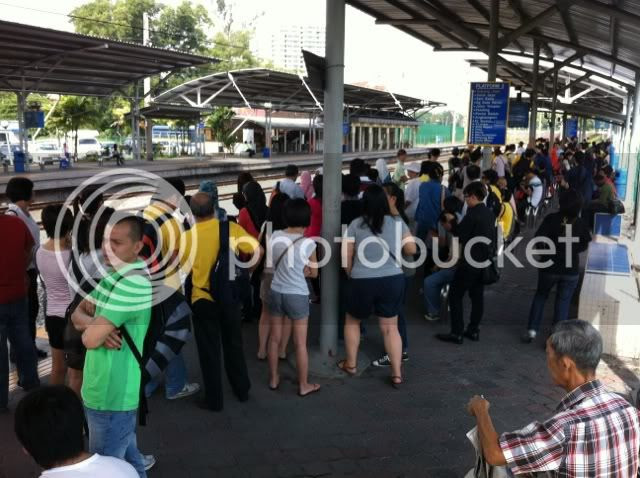 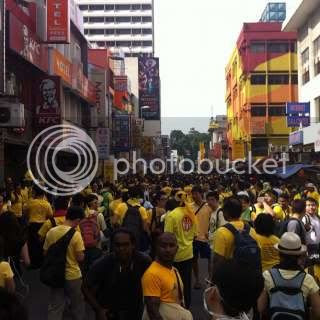 10.15:  All the trains and most of the highways are smooth flowing.

9.30: Jalan Tunku Abdul Rahman (TAR) - Hundreds of bersih supporters has been gathered at the back lane of Jalan TAR near Masjid India, many of them wearing Bersih or yellow T-shirts. There a group of young people who have set up a stall here to sell Bersih and 'Free Education' T-shirts. Jalan TAR and Jalan Parliament are closed by the police. While about 100 police officers form a human wall to barricade Jalan TAR, in front of Sogo, the protestors are able to evade the police by using the back lanes to go to Masjid India and Jalan Tun Perak. People are hanging around, sitting in front of shop and chatting while waiting for the protest to begin.
Posted by Malaysian Unplug at 10:21:00 3 comments: 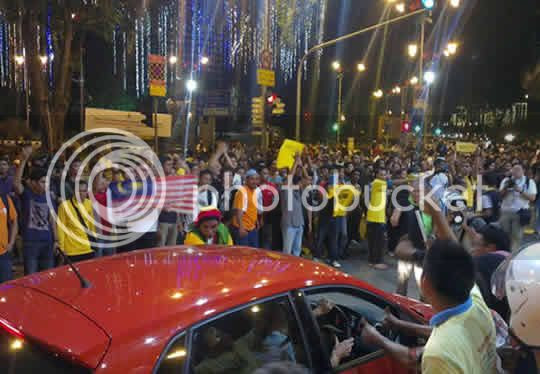 Thousands of demonstrators gathered in the neighbourhood of Dataran Merdeka last night in an early warning that the crowd at Bersih's third rally may match or exceed that of the previous assembly for free and fair elections held on July 9 last year.

From 8pm onwards, hundreds, many of whom were dressed in the electoral reform movement's yellow uniform, began to gather into groups on streets including Jalan Sultan in Chinatown as well as Jalan Tun Perak and Jalan Raja which lead to the historic square.

By 11pm, the group near Dataran Merdeka easily surpassed 1,000 according to numerous eye-witness reports although those at Jalan Sultan dispersed around midnight after an impromptu rendition of Negaraku, the national anthem.

Although many had dispersed by 1am, many were still turning up after that. "Everybody wants to be closest to Dataran" when the rally starts proper, said one participant.

Bersih co-chair Datuk Ambiga Sreenevasan told The Malaysian Insider early this morning "the Bersih feeling is in the air in Kuala Lumpur."

"It is a feeling of purpose and of hope. As we gather later today we will speak with one voice in claiming what is rightfully ours... democratic space, clean and fair elections and a clean environment. We will also claim back the right to shape our future," she said.

READ HERE FOR MORE
Posted by Malaysian Unplug at 10:26:00 No comments:

HERE is Why Malaysians 0VERSEAS are joining Global Bersih 3.0

Article by Yolanda Augustin, a Malaysian doctor now working in the UK.

To find and attend a Global Bersih 3.0 solidarity sit-in NEAR YOU, CLICK HERE

OR please go to http://www.globalbersih.org/

My name is Yolanda Augustin.

I left Malaysia 14 years ago to study in the UK, where I now live and work as a DOCTOR.

I’m writing to explain what inspired me to get involved in the Bersih movement and global solidarity work for Malaysia.

For many years, I felt a sense of helplessness and frustration as I followed Malaysian current affairs and saw the country I grew up in stuck in a downward spiral of poor governance and deteriorating civil liberties and human rights.

What really got to me was the complete waste of potential – Malaysia was and remains a beautiful country – rich in natural resources, great weather, fantastic cuisine and diverse culture. It has a small population of 28 million people that could enjoy a world class healthcare and education system if the money spent on hapless vanity projects and siphoned off to fund the multimillionaire lifestyles of government ministers was spent on improving the lives of the rakyat.

I was also struck by the vast number of Malaysians I met living overseas – many of them doing interesting and inspiring things – writers, scientists, entrepreneurs, doctors, chefs, bankers, lecturers, lawyers, nurses, town planners, engineers, actors, the list goes on.

Many of them still with strong roots and a sense of connection to their place of birth. Many of them wanting to contribute something good and positive towards Malaysia but not knowing what, where or how.

People would often ask me if I ever planned to return to Malaysia one day. I would usually smile and say “One day…when I finish my training… but not yet.”

The truth was that as much as I was often homesick and nostalgic for the country I grew up in, living abroad had changed my life and my mindset. I appreciated the freedom to move, think and speak as I pleased, without a psychological straight jacket, without the risk of the ‘guillotine of the Internal Security Act’ (or newly rebranded Special Security Offenses Bill) as Hishammudin Rais calls it continually hanging over my head, where overnight the special branch who have been following your every movement for months from a red Proton Saga can break into your home, kidnap you and tear the fabric of your life, and that of your family and friends apart.

I appreciated living in a place where archaic pieces of legislation such as the Press and Printing Act didn’t keep the press muzzled, making newspapers not worth the paper they were printed on, where the press kept the politicians in check, not the other way round.

I appreciated living in a place where critical thinking and debate were encouraged, where students were not arrested for peaceful protest, where freedom of speech and assembly were part and parcel of everyday life.

In my student days I had been part of a London solidarity anti-ISA campaign, sparked by the arrest and detention of those involved in the 1998 reformasi movement. A small group of 5-6 of us used to picket outside the Malaysian tourism Office in Trafalgar Square during our lunch hour. It was a nice gesture but it all seemed pretty depressing – Malaysians in general seemed to be plagued by a sense of inertia and a general unease that Special Branch Big Brother would catch them (even all the way in London) if they dared tell the government to start behaving itself.

Then in 2010 I met a group of like minded Malaysians in London, many of whom have since become great friends, and we started a series of solidarity protests again, to give support to our brothers and sisters in Malaysia who were tirelessly campaigning on various human rights issues and to form a pressure group aimed at holding the Malaysian government to account for their pitiful human rights record.

It was incredibly encouraging to see the solidarity movement grow from 10 to 20 to 50 regular attendees.

I mean – these are MALAYSIANS we are talking about – and we are generally not used to challenging authority or protesting (particularly not in freezing just above 0 degree temperatures!).

In June 2011 we joined in the global solidarity campaign for Bersih 2.0 and it was awe-inspiring to see Malaysians from over 30 cities around the world stand in solidarity with over 50,000 fellow Malaysians in KL to support the call for free, fair and clean elections.

In London we had expected around 100 people to turn up, 150 if we were lucky. When nearly 500 Malaysians gathered in front of the Malaysian high commission in Belgravia we were gobsmacked. Across 5 continents the global Bersih 2.0 fire had been lit and there was no stopping it.

The ridiculous antics of a panicking government – arresting over 1500 civilians, many for as little as wearing a yellow t-shirt, the detention of 6 activists under the Emergency Ordinance, the tragic death of 1 rally supporter, the unleashing of water cannons and tear gas on peaceful demonstrators, in one instance even into the confines of a maternity hospital, failed to snuff out the ‘unggun Bersih’ (flame of Bersih) as Pak Samad so aptly calls it.

It had exactly the opposite effect – merely igniting the flame further. Peacefully, sincerely and with quiet resolve – Malaysians around the world came together, with their own small but significant acts of peaceful resistance – to remind the Malaysian government and the world that it doesn’t have to be this way.


Free and fair elections are the essential building blocks of any open and mature democracy. It is our right to demand it, and we should expect no less.

An aunt wrote to me in the aftermath of Bersih 2.0 to explain what had inspired her to join the Bersih rally in KL. She put it simply, “July 9th 2011 will forever be etched in my mind as the day I decided to stop being afraid.

My daughter was adamant about going for the Bersih rally in KL and she went in on Friday evening with friends from the Women’s Aid Organisation to stay at a hotel in Bukit Bintang. I felt then that our generation had let our kids down and we were expecting them to move mountains by cleaning up the mess. It really was time to do something, no matter how minimal.”

This Saturday the 28th of April 2012, Global Bersih 3.0 solidarity actions will be taking place in over 70 cities in 29 countries around the world.

That time is NOW.

To find and attend a Global Bersih 3.0 solidarity sit-in near you please go to http://www.globalbersih.org/

- Yolanda Augustin
Posted by Malaysian Unplug at 23:06:00 No comments: 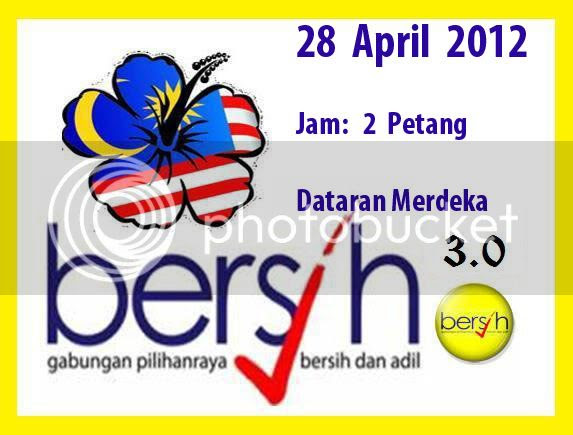 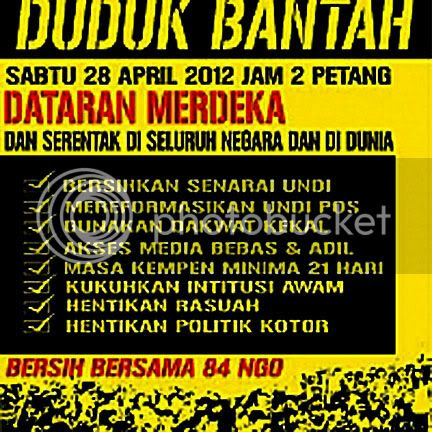