Ahmad Zahid Hamidi, How Dumb and Ignorant Can You Be on Malaysia's Commitment to UNCAC

The Scorpene scandal and the long arm of the law


WHEN it comes to an issue like corruption, nations have long since accepted that it cannot be combated single-handedly.  A significant milestone in cooperation was when the General Assembly of the United Nations (UNGA) in New York passed the United Nations Convention against Corruption (UNCAC) on 31 Oct 2003.

As a party to the UNCAC, how well do our government ministers understand Malaysia’s obligations under this international treaty and local laws on international cooperation on criminal matters?

Scorpène Class Malaysian Navy submarine "Tun Razak" in the shipyard of Navantia-Cartagena (Spain) few days prior to its delivery.

Under the UNCAC, state parties agree to cooperate with one another in every aspect of the fight against corruption, including prevention, investigation, and the prosecution of offenders. State parties are bound to render specific forms of mutual legal assistance in gathering and transferring evidence for use in court and to extradite offenders.

There is a provision whereby state parties that do not have extradition treaties with each other may use their common membership of the UNCAC as the basis for any extradition request. They are also required to undertake measures which will support the tracing, freezing, seizure and confiscation of the proceeds of corruption.

Another over-arching trend in the international fight against transboundary issues is universal jurisdiction. A country can bring to trial and prosecute in that country, those accused of having committed a crime in another country.

An area relatively new to Malaysia, we are only beginning to adopt universal jurisdiction through recent amendments to Section 4 of the Penal Code. This expands the scope of extraterritorial offences to include damage to property belonging to, or operated, or controlled, not just by a Malaysian federal or state government, but also to a Malaysian company or individual located outside Malaysia.

This addresses our lack of laws to prosecute offences such as the hijacking of a Malaysian privately-owned (but foreign-flagged) ship by Somali pirates in international waters.

Ignorance or lack of political will?

Bearing this in mind, Ahmad Zahid’s response to the possibility of being subpoenaed to appear in a French court to answer questions about the Scorpene affair is surprising for a number of reasons. France is also a signatory to the UNCAC, having signed it on 9 Dec 2003, and ratifying it on 11 July 2005.

The investigation by the French courts into allegations of transboundary corruption in the purchase of two Scorpene submarines by Malaysia would be precisely the kind of issue that UNCAC and universal jurisdiction are intended to address. By ratifying the treaty, Malaysia has signified to the world our willingness to submit to an international framework of cooperation in this regard.

The Defence Minister’s comments, then, seem totally out of line with our international obligations.
Ahmad Zahid reportedly said, “Why should I appear?  I am not a witness!  If I appear, who will pay for my expenses?  I don’t want to use my money and the government’s money.”

So really, Ahmad Zahid need not worry about spending his own money or that of the Malaysian Government. France would pick up the bill, merci beaucoup.

Ahmad Zahid’s own ignorance aside, Malaysia’s attitude towards the Scorpene probe is also an issue of political will.

Even though France is not a “prescribed foreign State” pursuant to Section 17 of the Act, Section 18 of the Act allows the Attorney-General to give special direction in writing for the Act to apply to that state. There is room for ad-hoc cooperation with France, if the Attorney-General recommends it and if the minister in charge of law agrees.

Malaysia could still refuse to entertain a request from France and would have grounds to do so in Section 20 of the Act.  These include:
However, Malaysia should be cautious of how a refusal would be perceived by the international community in such a high-profile case. Care must be taken not to give a wrong impression.

No doubt, the Act contains complex provisions which include the voluntariness of a witness to travel to another country to assist in a criminal probe. The details of the Act’s provisions are beyond the scope of this article but suffice to say, the Minister of Defence should not have been so quick and glib in his reaction.

Provisions do exist in Malaysian law to send him for an all-expenses-paid trip to Paris.  He should seek legal advice.

Had he done so, he might have not been so glib again with his latest reaction — “Who are they to issue a warrant of arrest? We are not subjected to French laws.”

‘Red notice’ option
There is still the possibility that France could request countries, with which it has a mutual assistance in criminal matters agreement, to detain Ahmad Zahid and deliver him to Paris.

This could happen should Ahmad Zahid travel to any such country or to any country which is a member of the European Convention on Mutual Assistance in Criminal Matters. No doubt he would then have to fight it, just as, under different circumstances, Julian Assange is currently fighting his extradition from the United Kingdom to Sweden.

It is open for the French courts, if Ahmad Zahid refuses to answer a subpoena, to upgrade that subpoena to an international warrant of arrest, and to seek the assistance of Interpol to effect it.

This is known as a “red notice”.  Whether the French would actually do that is a tale for another time.
Posted by Malaysian Unplug at 15:12:00 6 comments:

This is one of the hoodlums that had threaten a pasar malam outside Datuk Ambiga's house.

This is one of the hoodlums that had threaten a pasar malam outside Datuk Ambiga's house. You can see him painting the yellow lines on the road outside her house in the pictures (see below) 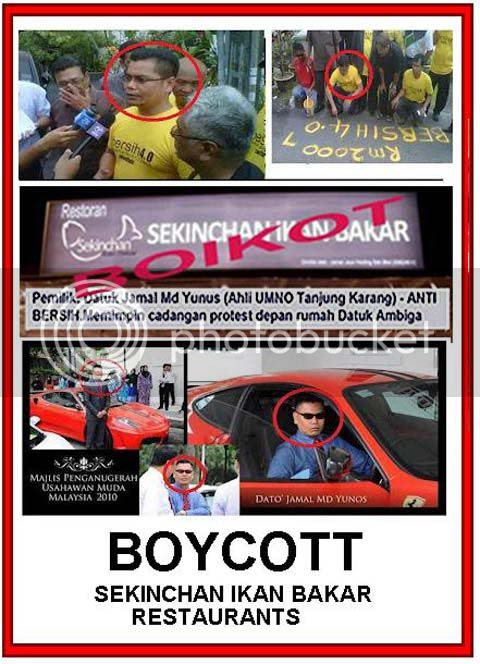 We do not need to eat Ikan Bakar at his outlets to survive but see whether he can survive without business patronage from the good supporters of Datuk Ambiga!

You reap what you sow! Show support for Datuk Ambiga and BERSIH! BOYCOTT SEKINCHAN IKAN BAKAR!

P.S. I wonder whether the Income Tax fellows know that ikan bakar business can be so lucrative that one can afford driving Ferraris and other sports cars from it!

Or is he one of the privileged UMNO cronies receiving "favours" from a munificent UMNO! Sekinchan ikan bakar

The owner of the above restaurant outlet is the bloody moron who proposes to organize a pasar malam in front of Datuk Ambiga's house.
Posted by Malaysian Unplug at 17:40:00 4 comments:

Recollections of the Other History of Independence of Malaysia: 63rd Anniversary of the Formation of Regimen-10 (Tentera Pembebasan Nasional Malaya)

Dr Mahathir, So how can a Malay lose power when it’s another Malay replacing the UMNO reject?

Dr Mahathir and the selling of Oxymoronicracy

Tun Dr Mahathir Mohamad today reiterated his advice for Umno leaders to discard self-interest and acts of sabotage to ensure a Barisan Nasional (BN) victory in the next general election.

Responding to the interview of his mother Che Tom Yahaya in Umno-linked TV channel TV3 over the weekend, PKR deputy president Azmin Ali wants Umno to stop dragging her into its dirty politics.

Unfazed by the onslaught against his personal life, Azmin (below) pledged to fight against the “ugly politics” nourished by Umno and its media.

“I call on media not to disturb my mother and Umno not to drag my mother into Umno’s dirty and disgusting politics.Family institution including family relationships should be harmonised and not disgraced in the media,” he said in a statement today.

“I always love and care for my mother and father. I still pray that my mother always remains in the protection of Allah, receives His mercy and in good health.

“I still love and respect my mother. I am also thankful to be awarded a wife, Shida, who is loyal, and children who understand this noble struggle,” he said.

Despite the slander from Umno, Azmin stressed that he will focus on his duty as PKR’s election director to face the 13th general election.

In the past one week, Azmin has been the target of character assassination by Umno’s media.

A dastardly act by an UMNO-owned TV. It is simply unbelievable that this UMNO-led Govt could even allow itself to STOOP SO LOW to bring a MOTHER of an Opposition MP to front the TV to score political points. Any decent Malaysian who values the integrity of the family-institution will find this action as UNACCEPTABLE on ANY account.

PM Najib and Rais Yatim must stand fully responsible for this unacceptable behavior. This is a ruling party which had been in Govt for over 50 years and acted without a decent conscience. Truly, THIS Govt is scrapping the bottom of the barrel to remain in power.

Surely, it remains to be asked: Do the ruling parties of the day deserve to be still in Govt- for bringing in the mother of a Opposition political leader to score political points? I just can't believe it, for a Govt which aims to be a civilised and developed nation by 2020 among the international community, to allow this to happen at all.