It is mischevious and highly dangerous to the social fabric of Malaysia for Malaysian Indian Muslims, (or any other non-ethnic Malays,) to have passage into UMNO by presenting themselves to ethnic Malays as " fellow Malays", and thereby gain political influence as paid-up members of UMNO, to be then fully engaged in DIVISIVE RACIAL politics against other races.

Background:(Read here for more from Bernama)

Representatives of Damai Malaysia – an umbrella body comprising 395 non-governmental organisations – handed over to Datuk Seri Abdullah Ahmad Badawi yesterday a memorandum criticising the illegal street rallies. The group of about 20 people led by Damai chairman Mohd Saiful Adil Mohd Daud was not allowed to enter the Royal Malaysian Air Force Subang airbase but after waiting for the airbase authority to get back to them, they were finally allowed to go in.

The memorandum said, "As can be seen from today’s memorandum, the PEOPLE who remained SILENT have now stood up to make their stand. They want peace to be maintained.."

Damai (claims to) represent 1.5 million members and its representatives include those from 75 Chinese-based and 20 Indian groups and associations. They condemned individuals and groups who used lies and slander against the country and asked for foreign intervention in Malaysia’s internal affairs.

By Liew Chin Tong, Executive Director of the KL based think-tank, Research for Social Advancement. Read here for more

"...Damai Malaysia, a coalition of 395 non-governmental organizations has been initiated by UMNO and MCA politicians in Kuala Lumpur. The Malaysian Chinese Association (which is the second largest ruling party in the coalition) has a candidate in Bukit Bintang which is the heart of Kuala Lumpur, Datuk Lee Chung Meng was one of the key people behind this group.

It’s mainly a coalition of mostly pro-government groups and they held a forum to denounce street demonstrations without specifically mentioning names, but mostly likely in response to Hindraf as well as the Bersih coalition gathering on November 10th. I don’t see this as a major group.

WHO is Behind "Damai Malaysia" ?
Read here for more on "MY Asylum"Blog"

So, who is Damai Malaysia, really? And for whom do they speak? The answer to that comes via two other online sources that Walski came across. The first, via the Malay-centric KLpos.com website, provides anecdotal evidence as to who is really behind the coalition. The following is an excerpt:

" ...the number given ( ) connected to the Office of the Peninsular Malay Students Coalition (better known as GPMS), located in Sentul Raya, KL, but its operator answered the call as 'Damai Malaysia' "(source: KLpos.com)

He also happens to be the Political Secretary to Datuk Seri Abdullah Ahmad Badawi, Prime Minister of Malaysia.

Who is Reezal Merican Naina Merican? Read here for more

Reezal Merican Naina Merican is an Indian Muslim from Penang ( i.e. MAMAK) who had managed to bring himself to the attention of Abdullah Badawi three years before Khairy ever showed his face in the Jalan Bellamy house.

Reezal Merican (often called ‘Ustaz Reezal’) is an IIUM graduate with a penchant for high politics and beautiful women artistes. He was sued for divorce by his second wife, actress Sharifah Norhaslinda.

Reezal Merican is a member of the Kepala Batas Umno division in Penang headed by Abdullah. Read here for more

When Abdullah Badawi ascended that high office, Reezal Merican thought that his time had come. His years of being the ‘lightning rod’ in IIUM -- attracting the ire of his fellow students who were mostly supporters of Anwar Ibrahim -- would finally pay off when Abdullah recognises his loyalty and perseverance in defending his image.

Khairy did not take this lying down though. He shot off another official memo to Abdullah, informing him that the IIUM graduate did not deserve the post as he added no value to the effort to show Abdullah’s administration as being a professional team of bright young things.

Khairy also accused Reezal of involvement with several young recording artists and newsreaders. The letter found itself on Abdullah’s desk, but not before chief private secretary Dato’ Thajudeen Abdul Wahab (no friend of Khairy’s) had made a copy and given it to Reezal.

Seething with anger, Reezal swore to eliminate Khairy from the Abdullah circle.
That promise was made in the white heat of anger.

Eventually, Reezal realised that it was better to be seen to support Khairy, at least for the time being. He took a step back and allowed Khairy to go for the UMNO Youth Vice-Chief post while he himself contested as an ordinary EXCO member, though he had a longer relationship with the UMNO Youth delegates.

On 15 June 2006, Reezal Merican Naina Merican wrote a letter to Datuk Zamani Abdul Ghani, the Deputy Governor of Bank Negara Malaysia about an amount of USD50 billion required by Malaysia to fund its national development.

Now, what authority does Reezal Merican Naina Merican have in instructing the Deputy Governor of Bank Negara? Reezal Merican is one of the ‘Tingkat Empat’ boys and the Political Secretary to the Finance Minister, who by chance also happens to be Malaysia’s Prime Minister.

Reezal Merican is not there because of his abilities but because Khairy Jamaluddin, the Prime Minister’s son-in-law, wants to keep an eye on things and Reezal Merican plays the role of Khairy’s eyes and ears. 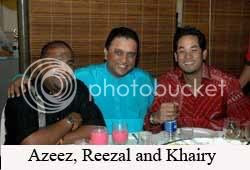 Something is very wrong when we have traitors in the (Malaysian Indian) community. Read here for more.

The Indian community consists of various ethnic groups with their roots going back to India. People from South India are the Tamils, Telugus, Malayalees, and those from North India are the Sikhs, Gujarathis, Bengalis and others.

In this group there also religious groups like Indian Muslims both from South and North India.

Religion can NEVER change your roots.

These Indian Muslims are bent on CHANGING THEIR RACE.

This is impossible. I may imitate a white man in his talk, mannerism, food, clothing and many others but I cannot be a white man, not even a “celup” white man.

A reader in Malaysiakini categorised Indian Muslims into three groups consisting of:

It is evident that the bulk of the Indian Muslims in this country come from the Indian-Muslim descendents of immigrants.

Generally, this group is referred to in Tamil as “thulukar” or “thulukan”. This is a misnomer, the origin being “thrukkan” or a mussalman from Turkey. Mamak is the Malay version.

The names Merican, Naina and Kader are very clear that these two chaps refer to the “thrukkans” .

Other prominent Indian Muslims/"mamaks" who became "Malays" and gained political influence in UMNO are: