"Subversives and radicals should not be given opportunities to voice out their ideas and views because they pose a threat to the country's peace and stability.

We want the government to take stern action, if there is a need to use the ISA (Internal Security Act), then so be it. " 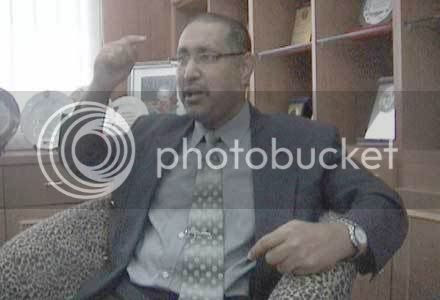 The Generations of Sayyid/Syed. Read here for more

"... Sayyid (سيد) /Syed is an honorific title that is given to MALES accepted as descendants of the Prophet Muhammad through his grandsons, Hasan ibn Ali and Husayn ibn Ali, who were the sons of his daughter Fatima Zahra and son-in-law Ali ibn Abi Talib.

Children of a Sayyida mother but a non-Sayyid/Syed FATHER CANNOT be attributed the title of Sayyid/SYED, however they may claim MATERNAL descent...."

It would mean that the title SAYYID/SYED, if truly the title is meant to designate that they are descendants of Prophet Muhammad, is only to be carried by the MALE generation of the family of his grandsons, Hasan ibn Ali and Husayn ibn Ali.

In what way can a male member of the Al-Habshee clan, if they had originally come from Ethiopia to Arabia as slaves (read here), then to India and to Malaysia, carry a "Syed" honorific name?

Males who were born to the DAUGHTER of the true male lineage from the Prophet (ie carrying the title Syed/Sayyid) through marriage to a MALE member of the Al-Habshee clan, CANNOT attribute the title of Sayyid/Syed to their names.

Based on the strict application of the use of the honorific title "Sayyid/Syed", a "Syed Al-Habshee" would mean that there was a MALE member of the Al-Habshee clan who had claimed descendancy through the Male generation from the grandsons of the Prophet.

How could that be ? If the Al-Habshees were originally slaves from Ethiopia, and that maternal descent from the Prophet lineage cannot attribute the name Sayyid/Syed.

It is unlikely that a MALE from the Prophet's grandson's male lineage had decided to take on the Al-Habshee clan name and thus legitimately claimed the honorific title of Syed for his future generations?

The descendants of the Prophet through his daughter's grandsons are known by these names today:

2) "al-Quraish", the tribe to which Prophet Muhammad belonged

3) "Hashmi" (aka Hashemite) ie, those belonging to the "Banu Hashim" clan of al-Quraish tribe

4)As for " Syed", it is now recognised as common generic surname of anyone CLAIMING to be of Prophet Muhammad's progeny. (There are clans with the Syed honorific in the Indian subcontinent who claimed to have genealogical records tracing back through the male line to the grandsons of Prophet Muhammad. Otherwise, it has to be presumed the name "Syed" had been hijacked by some Arabic-speaking families to claim lineage to gain social respect in Muslim communities outside the Arabian Peninsula, such as Malaysia )

There are plenty of "Syed" in Malaysia whose trace of lineage to the grandsons of the Prophet via the Male line is questionable at best and in some cases, fraudulent.

Excerpts: Read here for more on Malaysia-Today
In case many of you don't know, 'Syed' means his forefathers came from the land of the Prophet Muhammad.

'Alhabshee', in turn, means his ancestors originally came from Ethiopia. This probably happened in the days when Islam was expanding and the Muslim army was conquering the areas surrounding the Arabian Peninsular.

Those who resisted the Muslim army and lost the war would either be killed or captured and taken as slaves (while the beautiful women would become your plaything).

So Syed Ali's ancestors were probably Ethiopian prisoners brought back to the Arabian Peninsular as slaves to look after the camels and clean out their shit every morning until the day either they or the camels died.

But Malays, being the simple-minded people that they are and a race that is always awed by anything and everything that allegedly comes from the land of the Prophet, would certainly treat what this descendant of a slave from Ethiopia has to say with great importance (hell, they even made him a Senator).

After all, he does carry a 'Syed' in front of his name.

Yes, I remember 20 or 30 years ago when parents would offer their anak dara (virgin daughters) to a 'Tok Syed' for the night so that their daughter can 'terima berkat' (receive blessings).

This would involve the 'Tok Syed' impregnating the virgin daughter who would then be blessed with the sperm of a descendant of the Prophet.

Hey, this is true, no bullshit, and I almost changed my name from 'Raja' to 'Syed' but then I did not see many beauties on offer so it would have been a total waste of time as far as I was concerned (I suppose 'Tok Syeds' are not too fussy and have set lower standards for themselves).
-Raja Petra Kamarudin

"... As is known, Prophet Muhammad had no male descendants who survived infancy. However, his nephew (paternal uncle's son) Ali, had male progeny which survives and and its members are known mostly by the following family names in different parts of the Islamic world:

2) "al-Quraish", the tribe to which Prophet Muhammad belonged

3) "Hashmi" (aka Hashemite) ie, those belonging to the "Banu Hashim" clan of al-Quraish tribe

4) "Syed", a common generic surname of anyone CLAIMING to be of Prophet Muhammad's progeny

Tracing the Prophet's Lineage using Haplogroup Analysis.(Read here for more and here )
" .... it could be said that there are greater chances of the Holy Prophet's lineage to be from amongst (haplogroups) J*/J1/J2, G/G2 and to a lesser degree, K/K2. The dominant group in North Africa is E3b2, which is typically a Berber marker and not Arab, so at least the E3 types can be ruled OUT from this lineage.

Arab surnames in Pakistan like Siddiqui, Usmani, Abbasi and of course Syed cannot be viewed without skepticism if they belong to someone with Haplogroups R2, L & H, which are indigenous to South Asia....

... Arabs have lots of J's (> 50%) and little north African E3b. Among hap J, Bedouins and southern arabs tend to have much more J1, while J2 is more in the North (including Mediterranean Europe).

North Africans have around 50% Saharan lineages L, the rest mostly U6. Arabs have a bunch of other haplogroups, but much less African L.

The coming of Ethiopian, and other East African, SLAVES to INDIA a millennium or so later is abundantly documented in Indian, and in particular Gujarat, records.

These refer to such slaves mainly by three more or less alternative names: Habshis, Sidis, and Kaffirs.

The term Habshi/Habshee was a corruption of Habash, the Arabic name for Abyssinia. This name is believed to have derived from Habashat, the name of a Semitic people located in northern Tegray in present-day Ethiopia, and a neighboring stretch of Eritrea.

They are believed by many to have migrated in ancient times from Yemen.

The word Habshi, as its derivation implies, doubtless at first applied primarily to Abyssinians (or, in modern parlance, Ethiopians), but was later used more widely for any Africans.

However, most slaves taken from Africa to India would, for geographical reasons, have originated on the eastern side of continent. For much of the time covered in this paper they would probably have included a substantial, if not a predominant, proportion of Abyssinians.

Ethiopian and other African slaves taken to India (or indeed Arabia, their first port of call) were for the most part converted to Islam.

This change of religion sometimes occurred even on the boats transporting the captives across the sea. After conversion they almost invariably abandoned their pre-Muslim names, in favour of Islamic ones. This was unfortunate from the historical point of view, for it destroyed the possibility of identifying the slaves’ places of origin from their personal or family names.

Slaves in Islamic India, on the other hand, benefited from their conversion, in that it facilitated their integration into Indian Muslim society.

Unlike Negro slaves in the New World, slaves in Muslim India were largely free from racial discrimination. They differed from slaves in America and the West Indies, moreover, in that they were not subjected to plantation labour.

Many slaves in India entered the personal service of rulers and other politically important personalities, in not a few instances as palace guards. This enabled them, like such functionaries in many lands, to exercise immense power, not only as king-makers, but, after successful coups d’etat, as kings themselves.

The first Habshi of whom there is historical record was probably Jamal al-Din Yaqut, a royal courtier in the kingdom of Delhi, in the north of the sub-continent. A handsome and most likable individual, he won the favour of the then reigning sovereign Queen Radiyya (1236-1240). This incurred him much jealousy at court, on which account he was eventually murdered by his rivals.

Habshis, it is evident from fourteenth century reports, were soon also prominent in several other parts of India.

The largest concentrations of slaves was apparently found in the north-west, facing Africa: in Gujarat, and, immediately to the east, around the Gulf of Cambay. Both areas had long been in close commercial contact, across the Arabian and Red Seas, with Ethiopia and the Horn of Africa.

A sizable number of Habshis were also found much further south, at Calicut, which also faced the African continent, and traded with Ethiopia. Ibn Battuta tells of a shipowner’s agent at the port, who, when going ashore, was "preceded by archers and Abyssinians with javelins, swords, drums, trumpets and bugles".

Habshis were likewise in evidence further south again, at Colombo, in Ceylon, where Ibn Battuta reports that Jalasti, "the wazir and ruler of the sea", had "about five hundred Abyssinians".

Habshis were also reported in the interior of northern India. Ibn Battuta recalls that at Alapur, north of Delhi, the governor was "the Abyssinian Badr..., a man whose bravery passed into a proverb".

Later in the century a slave called Malik Sarwar, described as a Habshi, was appointed further north as Governor of Jaunpur.

He was succeeded by his son Mubarak Shah, who struck coins in his own name, and was succeeded in turn by his brother Ibrahim Shah. The latter reigned for almost forty years, and is remembered as a patron of literature and the arts.

Numerous Habshis and other foreign slaves were likewise politically very prominent in fifteenth century Bengal, a region in north-east India which also enjoyed extensive trade with Ethiopia and other parts of Africa.

The then Bengali ruler, Sultan Rukn al-Din (1450-1474), reportedly had no less than 8,000 African slaves, some of whom rose to positions of considerable importance.

Such slaves were particularly influential during the ensuing reign of Jalal al-Din Fath Shah (1481-1487). This caused the modern Indian historian Sir Jadu-Nath Sarkar, a stern critic of the Habshis, to remark:

"The Abyssinians... presented a serious problem... they had captured most of the high positions and now swarmed in the palace and in the city. Power made them arrogant and like the Turks in the employ of the later Abbaside Caliphs, they behaved with the citizens with increasing violence. The more defiant of them, according to Firishta, were consequently punished ‘with the scourge of justice’".

The Habshis were in fact so powerful in Bengal that a group of them, including the chief eunuch, conspired to overthrow the then ruler Jalal al-Din Fath.

"From protectors of the dynasty", one historian wrote, "the Abyssinians became masters of the kingdom".