The Perak Sultan Made her a "Datuk" 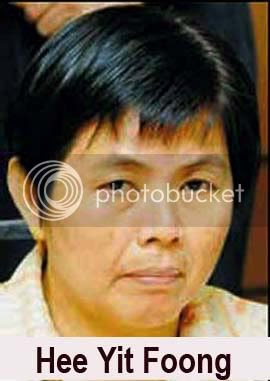 Her Contribution to Perak for the Datukship ??
For Frogging to BN

The DAP Frog, Hee Yit Foong made a Datuk by the Sultan of Perak

Once dubbed as “the most hated woman in Malaysia”, the Jelapang assemblyman who helped bring down the Perak Pakatan Rakyat (PR) government last year will now be known as “Datuk Hee Yit Foong”.

Ironically, she will now share the same accolade as that accorded to her former party’s chief, Perak DAP chairman Datuk Ngeh Koo Ham.

The now Barisan Nasional-friendly (BN) independent will receive the award at an investiture ceremony today.

The polio patient was one of three state assemblymen in Perak whose decision to turn independent in the 59-seat assembly changed the power equation in February 2009. Hee is the only one to receive the award among the three.

Her involvement had led to a steady stream of criticisms and accusations from her former party colleagues who strongly believed that the estranged former DAP leader was on the Barisan Nasional’s payroll.

Hee had the distinction of being the first non-Malay female and disabled person to be appointed as Deputy Speaker in the state legislative assembly when PR took power after Election 2008.

Today, she will be among the 919 to be conferred awards and titles from the state’s ruler Sultan Azlan Shah and one of the 56 to receive the title of “Datuk”.
Posted by Malaysian Unplug at 17:33:00

This unethical, handicap and greedy female frog from Perak getting a datukship shows how low this title worth nowadays esp in Perak.
Just jump like frogs one gets a datuk. How great and marvelous!!!
Perhaps the other 2 frogs will be the next in line.
We Perakians will boo and throw rotten eggs if this despicable female frog is seen in public and that includes all her cronies.
We will never ever give up reminding this frog of her unethical and greedy deeds. Never ever!!!!