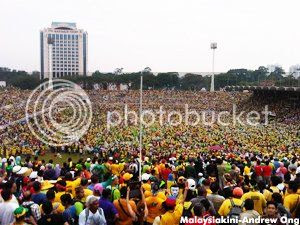 2pm: Stadium Merdeka - Overall, the marches to the stadium has been mostly smooth, with the police helping to control traffic.
There are impromptu marches all over downtown Kuala Lumpur and more of this can be expected because some groups, such as one currently in Masjid Negara, will only march after zohor prayers, which means they will march only after the rally is officially underway.
2.10pm: Stadium Merdeka - The rally kicks off with the singing of the national anthem as thousands of participants still making their the way into the stadium.

There are loudspeakers mounted outside the stadium for the benefit of those still queuing to go in.
DAP Rasah MP Anthony Loke starts the rally inside the stadium speaking in Chinese and Malay. He calls on the people to vote out the BN government.

“Najib is only gathered at Semenyih Tesco. We are at Stadium Merdeka and we rise to oppose BN,” he says.

2.20pm: Stadium Merdeka - An estimated 70,000 are in and outside stadium. The weather is cloudy but the earlier drizzler has stopped. A police helicopter is seen hovering above the city.

2.29pm: Opposition Leader Anwar Ibrahim, who is scheduled to address the rally later today, issues a statement to Malaysians and supporters abroad asking them to provide support to their fellow citizens in the country by spreading information about today's rally.

“Keep tweeting and posting all day, keep talking, keep sharing, every voice matters, every effort adds on to building a flood of hope, and by the day dwarfing the dam of intolerance and aloofness built by those who rule today.

“That one day, the dam will break and sunlight will shine again in our lives,” he said in the statement.
2.08pm: Stadium Merdeka - PAS Johor rep Suhaizan Kaiat speaks on issues concerning Pulau Batu Putih and the Iskandar project in Johor.

Shortly after, Tijah representing the Peninsular Orang Asli addresses the rally on indigenous rights and alleges that much of Orang Asli land has been robbed from them.

He says today should be remembered in history and that Orang Asli rights should not be denied, and for them to be treated fairly and equally.

Bersih co-chairperson Ambiga Sreenevaasan and PKR veep N Surendran are seen in the stadium.
2.20pm: Stadium Merdeka gate - Despite police warning to participants not to bring children, a family has ignored the order.

Suzilawani Mohd, 32, says she didn’t feel scared to bring her children to the rally because she expects that the government will not take a tough stand.

“Last time, I might be afraid because of the tear gas and water cannons,” she says, with her husband Naveed Ghalam Rasool beside her.

Asked about her reasons for taking part, she says she wants to experience the feeling of a rally before the election.
2.25pm: New groups of rally participants, with some of them wearing the iconic Bersih yellow T-shirts and holding PAS flags, start to march from the National Mosque to Stadium Merdeka.

Among them is Mohamad Yusof, a disabled on wheelchair, who came from Ijok, Selangor, to join the rally.

2.30pm: Jalan Imbi, Hang Tuah LRT Station - Despite the rally having begun half an hour ago, there are still many participants on the way to the stadium.

Many protesters dressed in yellow and green are spotted at the Hang Tuah LRT station. In addition, many Muslim participants have just started to walk towards the stadium after their prayers at the Albukhary mosque.

The stadium is about 1km from both the LRT station and the mosque.

2.50pm: It’s drizzling in the stadium. Bersih co-chairperson S Ambiga is giving speech. She reiterates that Bersih is a non-partisan NGO fighting for the people.

The electoral reform coalition, she says, is to safeguard the people's rights in the coming general election.

“We are not favouring any political party. We fight for the rakyat. I hope you all will come out and vote in the 13th general election.”

2.53pm: It is Himpunan Hijau chairperson Wong Tack's turn to give speech.

Without wasting any time, he urged the people to rise up and change the government come the next general elections.

"God gives us a wonderful and beautiful land, why do we want to destroy it?"

"Enough is enough, the people must rise up. This corrupt regime must be dropped. We must remove the corrupt government!"
2.51pm: According to a Twitter update from the police, the stadium has been filled with about 80,000 people as at 2.45pm.

2.55pm: A lot of people can't get into the stadium and are hanging around the carpark.
The stadium is filled to the rafters. Many resort to climbing on the ticket stands, fence and walls to witness the proceedings.

2.55pm: Jalan Maharajalela – Participants outside the stadium are having a carnival playing on their vuvuzuela trumpets while the cars passing by honk to show support.

3pm: Anak's Mazlan Aliman takes the stage. He starts his speech with a loud shout of “Undur Isa Samad!” (step down Isa Samad)

“All this time BN has been in power due to strong support (from Felda settlers). God willing this time Felda folks will rise and march to Putrajaya.”

He jokes that he had never expected his poetry could be used as a weapon in this country.

“Even poems have become weapons,” he says in a short speech before reciting his poem ‘On the field of history’.

He adds that he has always wanted to witness a ‘sea of humanity’.

“In my life... I am already 80, I have always dreamed of witnessing a sea of souls. This is it. Change now,” he said.
Pakatan leaders will then take their turn to speak.

As rally secretariat chairperson, he thanks all quarters for making the rally a success, including the police department.

He called the rally today a step towards Putrajaya.

“This is our last rally before heading to Putrajaya,” he said to a roar from the crowd.

He says Malaysians are holding concurrent rallies in Jordan, London and Auckland.

Mat Sabu then tells the crowd about the SMS (right) that Malaysiakini had reported offering participants money to participate in the rally.

The fake message told participants that their payment for taking part in the rally was ready for collection at PKR headquarters.

“I do not intend to pay your RM150, but I would like to ask funds from you, ladies and gentlemen. I would like to ask donations,” he says.
With that, the organisers begin collecting donations from the crowd.
3.30pm: Outside the stadium, some participants are seen shaking hands with the police in appreciation of their service. One attendee from Sungai Petani is spotted thanking the police before rushing off to take a bus home. The police replies with a warm smile.

“The police were good today. They did not disrupt our rally compared to the past,” he says.
3.35pm: After Samad Said's poem, singer Ito returns to the stage and perform another song, which touch on the unity of all the races.

While enjoying his performance, the 100,000-strong crowd also perform the "wave" around the stadium a number of times.

3.38pm: The police revises one of its earlier Twitter postings, clarifying that the estimation of 80,000 crowd in the stadium at 2.45pm was a “technical mistake”.

“The real number will be announced by the Kuala Lumpur police chief or district police chief,” read the latest message.
3.52pm: Earlier at about 12pm, Mohamad Sabu who is the rally's secretariat chairperson told Malaysiakini that the organiser will not entertain controversial carpet dealer Deepak's request to speak in the stadium.

"No, we already have many NGOs want to speak in the rally, no more space," said the PAS deputy president.

3.58pm: Jordan - Malaysians in the Middle East nation report that after Friday prayers, the undergraduates from Mu’tah Jordan have gathered at the snow-covered Tarawneh Square in 4 degrees celcius weather.

“Although it is cold, we are filled with the spirit of the rally as a sign of concern for Malaysia,” said Suhaila Lukman in an email statement.

She says although they are unable to be in Kuala Lumpur, they are there in spirit and prayer, and share the youth’s aspirations for change.

“Our rally lasted around 30 minutes accompanied by speeches from the student representatives, followed by prayers and shouts of ‘Takbir’,” she

This huge rally also tells us the most important message of all; it tells us that middle class Malays have come to realize that UMNO has FAKED their claim to represent all Malays, because this rally is organized by the opposition, Pakatan Rakyat. After 60 years of faking the claim that only UMNO can help he Malays; middle class Malays have belatedly come to ask themselves, IF UMNO IS DOING SUCH A GREAT JOB OF HELPING THE MALAYS, AS UMNO CLAIMS, THEN WHY IS IT THAT THE MALAYS ARE IN THE SAME POSITION AS THEY WERE IN SINCE 1957 ? I say to my Malay friends, if UMNO & Mahatir have done such a great job of helping the Malays then why have you not progressed ?

I will tell you Malaysians (Malays & Non Malays)what is the most obvious & glaring issue that exposes the dismal failure of Mahatir & UMNO to progress both the wealth & living conditions of the Malays; Mahatir & UMNO has failed to establish a Malay commerce middle class...NO MALAY SHOP KEEPERS, NO MALAY EXPORTERS, NO MALAY IMPORTERS, NO MALAY WHOLESALERS, NO MALAY TRADERS ALMOST NO MALAY FAMILY OWNED BUSINESSES, NO bona fide Malay contractors......I can go on & on. 60 years of Mahatir coddling has produced zero Malay representation in the above fields of generating wealth. Mahatir & UMNO has only produced a couple of million Malay bureaucrats & civil service WALLAHS !

I say to my Malay friends Mahatir & UMNO far from improving your stake in Malaysia's wealth creation, HAS CRIPPLED YOU and made you ineffectual & useless. UMNO has and will lead into a dead end. Time for change and don't worry about the Chinese, they are your asset and providers.