In 1MDB lawsuit, Justice Department trying to seize more than $1 billion in assets


U.S. prosecutors have linked the prime minister of Malaysia, a key American ally in Asia, to hundreds of millions of dollars allegedly siphoned from one of the country’s economic development funds, according to a civil lawsuit seeking the seizure of more than $1 billion of assets from other people connected to him.
The Justice Department filed lawsuits Wednesday to seize assets that it said were the result of $3.5 billion that was misappropriated from 1Malaysia Development Bhd., or 1MDB, a fund set up by Prime Minister Najib Razak in 2009 to boost the Malaysian economy.
The move sets up a rare confrontation between U.S. prosecutors and an important partner in the fight against terrorism. The moderate Muslim nation is also a counterpoint to China’s rising ambitions in Asia.
No criminal charges were filed.Among the Justice Department’s assertions: That some $1 billion originating with 1MDB was plowed into hotels; luxury real estate in Manhattan, Beverly Hills and London; fine art; a private jet and the 2013 film “The Wolf of Wall Street.” Among those behind the spending, the lawsuit alleges, was Riza Aziz,stepson of Mr. Najib.
“The Malaysian people were defrauded on an enormous scale,” said Deputy FBI Director Andrew McCabe at a news conference announcing the complaints. The asset seizure would be the largest ever by the Justice Department’s anticorruption unit.​
The complaint reveals previously unknown allegations about the money that flowed into Mr. Najib’s accounts, such as how prosecutors believe a Saudi prince acted as an intermediary for some of the money and the exact circuit funds followed between a handful of key offshore companies.
Mr. Najib has been at the center of the scandal surrounding 1MDB since The Wall Street Journal reported more than a year ago that hundreds of millions of dollars that originated with 1MDB flowed into his personal bank account. Mr. Najib has said he had done nothing wrong and that any suggestions of wrongdoing were political smears. Malaysian officials have released at least nine statements since last September challenging media reports on 1MDB and accusing the Journal of recycling unproven allegations in its coverage of the fund.

The U.S. case ups the ante by putting the American government’s word behind the charges. The lawsuit doesn’t name Mr. Najib and no charges were brought against him, but there are 32 references in the complaint to “Malaysian Official 1,” who allegedly received hundreds of millions of dollars in funds siphoned from 1MDB.
A person with direct knowledge of the investigation said “Malaysian Official 1” is Mr. Najib. Descriptions of the official in the filings include information about Mr. Najib’s position at 1MDB along with other identifying details.
Mr. Najib’s press secretary noted the civil lawsuits filed by the Justice Department and said the Malaysian government will fully cooperate with any lawful investigation.
In a statement, 1MDB said it was aware of the U.S. news conference about the enforcement actions, but said it had no assets in the U.S. and wasn't a party to any lawsuits. It said it would cooperate with any lawful investigation.
Mr. Najib has fought off efforts to oust him from his office by rallying members of his party, which has run Malaysia since its founding, and pushing out officials who opposed him

The Malaysian attorney general has said the funds that went into Mr. Najib’s account were a legal donation from Saudi Arabia and cleared him of wrongdoing.

The complaint repeats that description and then describes how the funds came from 1MDB via an offshore entity called Tanore Finance Corporation and other ways.
The property seizures will put more pressure on Mr. Najib. “Malaysia has now become the global laughingstock,” said opposition leader Tony Pua, a frequent critic of Mr. Najib. He criticized the Malaysian government’s investigations into 1MDB.
Those investigations haven’t yielded much, until now. U.S. officials said they were helped by the Malaysian Anti-Corruption Commission, which showed “tremendous courage” in pursuing the investigation. It is not clear whether their assistance was authorized by the Malaysian government.
Over more than 130 pages, the U.S. case provides the clearest picture to date of the alleged fraud, which prosecutors say began almost from the day 1MDB was founded in 2009. The complaint alleges that money was misappropriated almost immediately after being borrowed by the fund.
Its first-ever deal involved a Saudi Arabian company called PetroSaudi International Ltd. The complaint says that between 2009 and 2011, $1 billion was diverted to a company in the Seychelles called Good Star Ltd., which was beneficially owned by Jho Low, a Malaysian financier and confidant of Mr. Najib. A lawyer for PetroSaudi did not respond to a request for comment.
Mr. Low was deeply involved in 1MDB from the start and was central to the alleged fraud, the complaint said. He took cash that originated at 1MDB and spent heavily at nightclubs and used some of the money transferred into Good Star to pay casino bills, including $12 million to Caesars Palace in Las Vegas and $13.4 million to the owner of the Venetian Las Vegas casino, the filings say.Some $400 million of that money was allegedly brought to the U.S., where Mr. Low bought a Beverly Hills hotel, the L’Ermitage, and made other major purchases. Some money from 1MDB went to Mr. Najib via a Saudi Arabian prince, the complaint alleged.
A representative of Mr. Low declined to comment.
The U.S. actions are part of widening global probes into 1MDB. In Singapore, authorities said Thursday in Asia they had frozen bank accounts holding $184 million of which $88 million belongs to Mr. Low and his family.
Singapore authorities also said they had found “control failings” and breaches of money laundering regulations at several financial institutions in the city-state as part of a wide-raging investigation into misappropriation of funds from 1MDB.
Among the financial institutions found by the central bank to have had “control failings” are Singapore’s largest bank, DBS Bank Ltd., and the Singapore branches of Standard Chartered Bank Plc. and UBS AG.
The banks had “weaknesses in the process of accepting clients and monitoring transactions,” a joint statement issued by Singapore’s police, central bank and attorney general’s chambers said.
Spokespeople at DBS, Standard Chartered and UBS did not respond to a request for comment.
The Malaysian fund raised about $6.5 billion in bonds arranged by Goldman Sachs GroupInc. in 2012 and 2013 and about $2.5 billion of that was diverted into shell companies under the guise of a business arrangement between Malaysia and an Abu Dhabi sovereign-wealth fund, the complaint says.
Goldman said Wednesday that it had “no visibility into whether some of those funds may have been subsequently diverted to other purposes.” 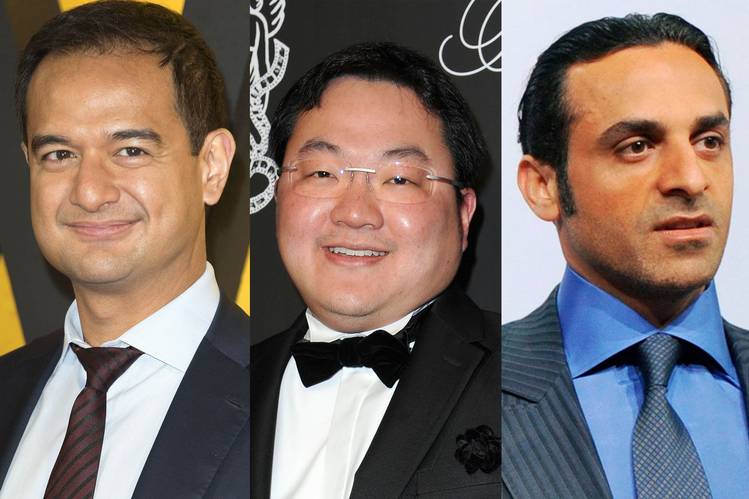 ENLARGE
From left: Riza Aziz, stepson of Malaysian Prime Minister Najib Razak; Jho Low, a Malaysian financier;
and Khadem Al Qubaisi, a former Abu Dhabi managing director of a sovereign-wealth fund. PHOTO: L-R: ZUMA
PRESS (2); AGENCE FRANCE-PRESSE
Almost immediately after receiving $1.4 billion from the first pair of bonds worth $3.5 billion, the alleged conspirators transferred money to Red Granite Capital—a company owned by Mr. Aziz—as well as to a company called Blackstone that was controlled by one of Mr. Low’s associates, Eric Tan, the complaint says. Mr. Tan couldn’t be reached for comment.
Mr. Aziz allegedly used funds from 1MDB to fund the production of “The Wolf of Wall Street.” The government is attempting to seize future proceeds from the film that are due to Red Granite.
Khadem Al Qubaisi, the managing director of the Abu Dhabi sovereign fund that guaranteed the bonds, received $472,750,000 in an account controlled by a company he owned, the complaint says. Funds also went from Blackstone to the private accounts of Mr. Najib, according to the complaint. A representative for Mr. Al Qubaisi didn't reply to requests for comment.
Red Granite Pictures said that to its knowledge, “none of the funding it received four years ago was in any way illegitimate.” It said it is cooperating fully with all inquiries and that it and Mr. Aziz “did nothing wrong.”
Mr. Low quickly became a fixture in international art circles, yet he often went to great lengths to obscure his actual purchases, at one point enlisting a colleague to place a $5.5 million winning bid at Christie’s for a Vincent van Gogh pen-and-ink drawing from 1888, “Vincent’s House in Arles,” according to the complaint. During that sale in early November 2013, the pair sat with friends in a coveted skybox overlooking Christie’s Rockefeller Center salesroom, according to the filing. Of the space, one Christie’s employee emailed a colleague to say, “It better look like Ceasar Palace [sic] in there … The box is almost more important for the client than the art,” the filing said.
That van Gogh is now one of several masterpieces being sought by federal authorities, along with a pair of Claude Monet paintings, a Venetian scene and a waterlily pondscape. The filing said Sotheby’s had the van Gogh and the Monets in its possession as recently as June 7.
In a statement, Sotheby’s said it couldn’t confirm the current whereabouts of the three paintings up for seizure, adding: “Sotheby’s always cooperates with government investigations.”
Christie’s said it has a rigorous anti-money-laundering program, it stopped doing business with Mr. Low when it found out he was under investigation and it is cooperating with authorities.
Posted by Malaysian Unplug at 19:29:00