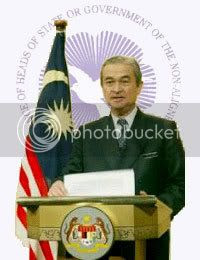 Those words best describe Prime Minister Abdullah Ahmad Badawi’s leadership, if indeed it can be thus called. The only consolation is his increasing irrelevance.

He is not much good to Malaysia, but then he could not do much damage either. Malaysia has survived worse before; it will survive his incompetent leadership.

What we cannot estimate however, is the lost opportunity: Where could Malaysia be if only we had effective leadership

Take his leadership, or lack of one, during the recent flood.

With over half of the peninsular states affected and thousands stranded, he saw fit only to express his sorrows. He then went right ahead with his scheduled overseas vacation.

The typical civil service “nine-to-five” mentality; once out of the office you forget about your job and responsibilities. This “time card punching” culture is entrenched and difficult to eradicate even after you become Prime Minister.

Only when there were considerable criticisms in the Malaysian blogosphere of his absence did he do an about turn and came home to tour the flooded areas.

The mainstream media were, as usual, silent on his initial absence.

When Abdullah finally cut short his overseas vacation, The New Straits Times, a paper never known for accuracy or truthfulness, declared that Abdullah toured the flooded areas immediately on returning from his earlier trip to Venezuela. The paper conveniently omitted that Abdullah was already off on his way abroad for his vacation.

It matters not; Abdullah has become irrelevant.

All he could do was engage in “photo ops” with some babies and to express his anger at the inevitable looters. Surprise! Surprise!

As Home Minister, he should at least send more reinforcements of police personnel and threaten aggressive prosecution of the lawbreakers. Instead he asked the people to make citizen’s arrests. As if that would do it!

Abdullah was reduced to doing the only thing he could: sermonising. Indeed “touring” is the right word; he was no different from the other voyeuristic visitors.

It did not take him long to treat the government’s fleet of expensive corporate jets as his private toys. He was busy jetting not only himself but also members of his adult family to all over the globe. Someone in Parliament ought to ask whether those adult family members accompanying him paid their way. (I would give only his adult daughter a free ride being that she is his official escort.)

This man of hitherto modest means and taste would not move into the palatial official Prime Minister’s residence until it had undergone a multimillion-dollar renovation! Now he aspires to own a mega yacht. Such pretensions for an Imam from Penang, a state where Malays are fast being marginalised!

That is not my observation, rather that of his son-in-law.

His denial of the published report of his acquiring the mega yacht was instructive. He denied seeing the boat (technically that could be correct as the report said the boat was still being built!) but he did not address the question of why he was in that unknown port city in the first place. It was not exactly a convenient refuelling jet stop on his way to Venezuela. He did not deny being there but gave no reasons as to why.

A mindset, steeped in religious faith, is difficult to eradicate. There are no midterm elections or the equivalent of an Iraq Study Group in Malaysia to remind him of his errors. The UMNO General Assembly, in particular its leadership convention, would normally be the avenue for such checks on the leadership, but that has been postponed till after the general elections. Those could be held as late as May 2009. Abdullah is thus securely ensconced till then. Therein lies the danger to the nation.