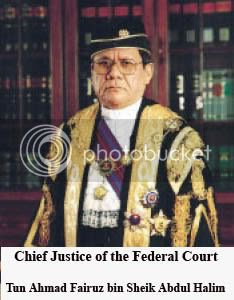 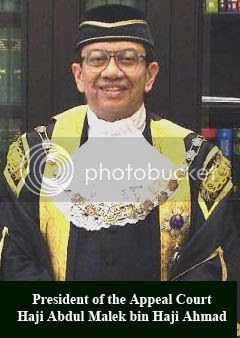 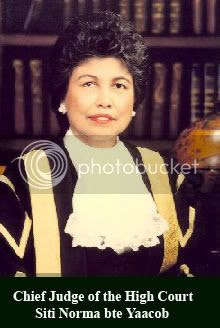 See below the list of judges in the Federal Court, the Court of Appeal and the High Court or click here

" The recent 2-1 majority decision of the Court of Appeal in Subashini Rajasingham v Saravanan Thangathoray, is most worrying in the sense that it permeates not only a feeling of uneasiness and hopelessness among non-Muslims but also of greater significance is the implications hereon and the worrying precedent the case and particularly the decision of justice Hasan Lah has for future cases. "
-Norman Fernandez

"... We are heading for a constitutional crisis should members of the Bench decide to abandon their role in protecting and defending the Federal Constitution, the highest law in this land."
-Jeff Ooi

".... it is unfair to expect NON-Muslims like Subashini to go to Syariah Court even if there is a perfect justice in the syariah system because the law gives her right to pursue her remedy in the CIVIL courts and NO WHERE ELSE . Muslims can do away with the civil courts if they so wish...."
-Zaid Ibrahim

The frustration of the legal profession with the highly controversial decisions from the Bench of Malaysia's secular court on religious issues is best expressed by one lawyer's comment in his blog, "What's going on?"

Questions are asked by Malaysians whether the judges in Malaysian secular courts deliberately refused to consider the fundamental liberties of Malaysians enshrined especially in Articles 11 and 12 of the Federal Constitution, which read, inter alia:

"...Every person has the right to profess and practice his religion and, subject to Clause (4), to propagate it'

...No person shall be required to receive instruction in or take part in any ceremony or act of worship of a religion other than his own.

.... For the purposes of Clause (3) the religion of a person under the age of eighteen years shall be decided by his parent or guardian."

It is becoming obvious to Malaysians in general that the majority decisions of the courts made recently on religious issues are guided and/or influenced more by the individual judges' own religious leanings and personal prejudices instead of being based on the rule of law and the enshrined articles of the Federal Constitution protecting the fundamental liberties of the citizens.

So, we must really ask "What is going on" on the Bench when it comes to ruling on matters affecting the fundamental liberties of each and every Malaysian, irrespective of age, sex, race and religion ?

The majority decisions of the courts are letting down the aggrieved citizen in the country seeking justice , leaving aside the perceived injustices coming from the politics of the Executive and the Legislative.

It would appear from recent cases that our judges in the secular courts, right up to the Appeal Court, had surrendered their sacred responsibility as unprejudiced referees on matters of fundamental liberties; in the eyes of the man-in-the-street, it is tantamounting to the courts making a mockery of the Malaysian Federal Constitution.

For those appearing before these judges, there is bewilderment in the way the majority decisions were made, leaving a feeling that their fundamental liberties are not upheld and respected by the courts.

The question Malaysians are asking: Can our judges in the secular courts be relied upon by each and every Malaysian citizen, irrespective of sex, age, race and religion, to protect the sanctity of the Federal Constitution and his or her fundamental liberties?

By the way the judges ruled recently on religious issues, the answer seems to be: "NO".

For one thing, religious leanings of MUSLIM judges sitting on these cases seem to sway their decisions more than the articles of the Federal Constitution.

Integrity of the judges's decisions could be compromised, if recent events are to go by, and they may stand accused in the court of public opinion, of acting irresponsibly in discharging their duties viz-a-viz the Federal Constitution.

There is a constitutional crisis, undoubtedly, NOT on the state of the nation, but on the very foundation of the basic rights of Malaysians in a democracy, ie their fundamental liberties enshrined in the Malaysian Federal Constitution.

A crisis that comes not from the Executive, but from the Judiciary itself, that third estate which we least expect such a crisis to come from.

Thus, a dark cloud is now hanging over the country when it comes to seeking redress from the Bench on our fundamental liberties.

The Judges in the Malaysian Courts
These are the individuals who were appointed as judges deciding on the fate of Malaysians.

Email ThisBlogThis!Share to TwitterShare to FacebookShare to Pinterest
Labels: Judiciary