Read HERE on BigDog.com and Here on Malaysiakini

Raja Petra Kamaruddin of Malaysia Today filed a Statutory Declaration at a Commissioner of Oath, registered under the jurisdiction of Kuala Lumpur High Court on 18 June 2008 against Datin Seri Rosmah Mansor, wife of the Deputy Prime Minister alleging that she was at the scene when Mongolian national Altantuya Shaariibuu was murdered. 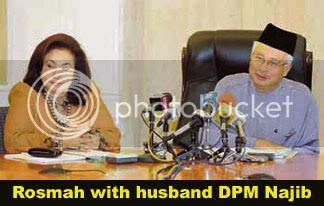 Raja Petra accused Datin Rosmah as among three individuals who were present when Altantuya was murdered on October 19, 2006. 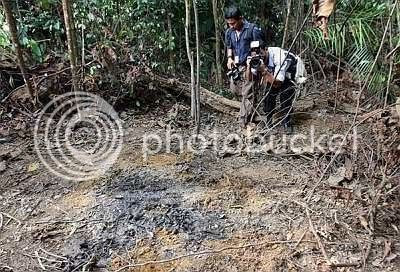 In the Statutory Declaration, Raja Petra said his "informer" told him,

"(Acting Colonel) Aziz (Buyong) was the person who placed the C4 on various parts of Altantuya’s body witnessed by (Datin) Rosmah and Norhayati (Aziz young's wife)."

(Note: Altantuya’s body was blown up with C4 explosives at a secondary forest in Puncak Alam, Shah Alam. The murder trial is still with the Shah Alam High Court. )

He said the purpose of this statutory declaration is to urge all these parties who have been duly informed and have knowledge of this matter to come forward to reveal the truth so that the police are able to conduct a proper and thorough investigation into the murder of Altantuya.

He said he made this "solemn declaration conscientiously believing the same to be true and by virtue of the provisions of the Statutory Declaration Act, 1960." 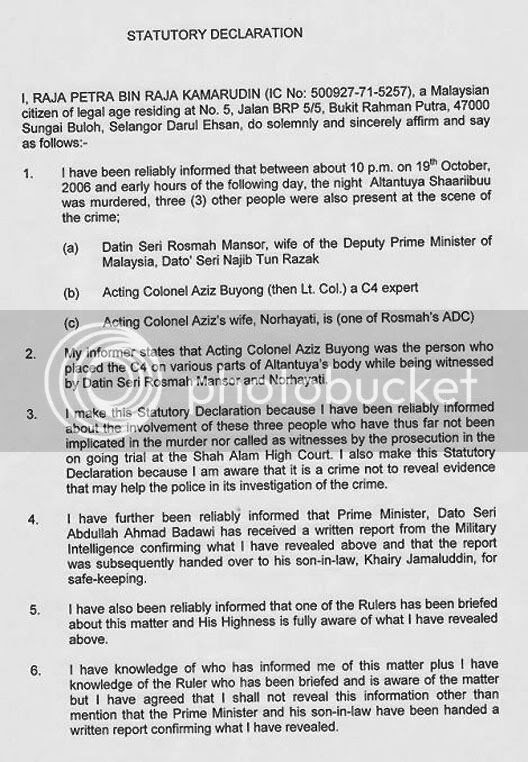 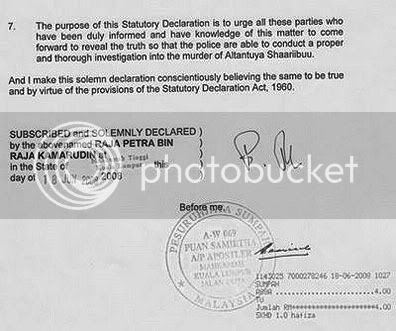 In a statement to Malaysiakini, Raja Petra confirmed the content of the Statutory Declaration. (Read here)

In the phone interview with Malaysiakini, Raja Petra explained he did NOT lodge a police report on the latest allegation which could lead to a fresh police probe on the Altantuya murder because in a separate case in 2001 when he was allegedly beaten up by a high-ranking policeman, the police did NOT take any action over his police report he had lodged.

3. Declarations made by virtue of the provisions of this Act shall be deemed to be such declarations as are referred to in sections 199 and 200 of the Penal Code [Act 574].

One must realize that such statements should be kept to the court and the court alone until determined to be true. Also, as to what JFK said, he as usually is sweet sounding, but never really of sound logic. It is not necessarily true that one is scared of the people when one keeps secrets from the people. Why does everyone keep secrets? Not because they are afraid of the people, but because they are afraid of the people's stupidity and ignorance. The majority as shown in most cases (look at the bell curve!) would show that most people lack sufficient logic to make sound judgement. And worse still, when we put in emotions and religious morals which blind the people, this normal curve becomes drastically skewed such that most of those who will make their decisions will have their judgements clouded by emotions! Do we want a nation like this? Is anarchy our objective? I do not promote nor like dictatorship and tyranny, but one must also realize that some amount of secrecy and autocracy is required to maintain order in any situation. Is that not why people choose leaders? It is because a true democracy can never work! There would be chaos! If you people believe the courts to be biased, run for parliament and try to convince others to change it! All that is done with this blog is spread more uncertainty and hatred among the people! Do you people now know why there are so many demonstrations bordering on riots by the people from both sides? Unless one can claim to have judgement as cold, calm, sound and surgical as Sherlock Holmes was portrayed to have, one should shut up and keep quiet about it unless a solution that is better can be come up with with said cold, calm, solid and surgical logic.