The Pro-UMNO FACTION in PAS
Who Spoilt Anwar's Plan on September 16, 2008
to Take-Over Putrajaya 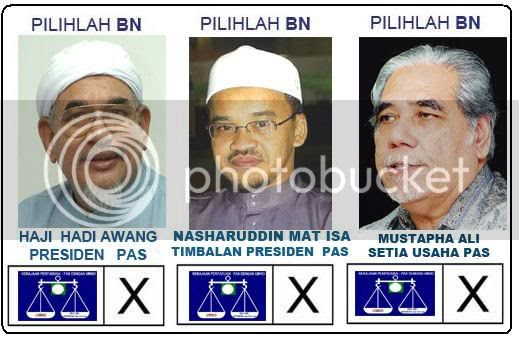 This startling revelation comes from a pro-PAS blogger, popularly known as 'Tulang Besi', who wanted the PAS president to apologise to all opposition supporters.

According to Tulang Besi, who operates the 'Malaysia Waves' blog, Hadi was unhappy with the high number of non-Malay MPs from Barisan Nasional in the defection plan.

“When Anwar presented the 30 MPs from Sabah and Sarawak, Hadi realised that the number of non-Malays outnumbered that of the Malays,” he said.

Hadi, he added, was not satisfied with just Muslim MPs, but wanted Malay-Muslim representatives.

In view of this, Tulang Besi said the PAS leader disagreed with Anwar's proposal to form a Pakatan Rakyat government without a Malay-Muslim majority.

Tulang Besi also published excerpts from an interview with Islamic website Ummahonline, where Hadi had stressed on the importance of having a Malay-Muslim majority, saying: “Being Muslim alone is not enough.”

The blogger critcised the PAS president for resorting to racial politics, despite his party championing the Islamic cause.

In order to placate Hadi, Tulang Besi said Anwar had offered the prime minister post to a 'Mr X' who would bring in more Malay-Muslim MPs.

“By then it was too late. Pak Lah (former premier Abdullah Ahmad Badawi) had already announced that he would resign, so the 'mood' to defect (was no longer there) and BN had used other tactics (to prevent) defections during the time wasted (haggling over the Malay-Muslim issue).

The PAS president conspired in ensuring that the Sept 16 takeover plan collapsed by giving shallow excuses.”

Tulang Besi claimed that Hadi and the pro-Umno faction in PAS did not want Pakatan to form government.

Political observers pointed out that this revelation would further erode PAS' popularity among the non-Malays while Hadi would be seen as being NO different than Umno leaders, who play the race card.

It would also lend a devastating blow to the 'PAS for all' slogan, they added.