Who is Lying the Rakyat? The UMNO-Controlled Selangor Palace OR the People-Elected MB of Selangor

"The Selangor Sultan in the Eye of the Storm" 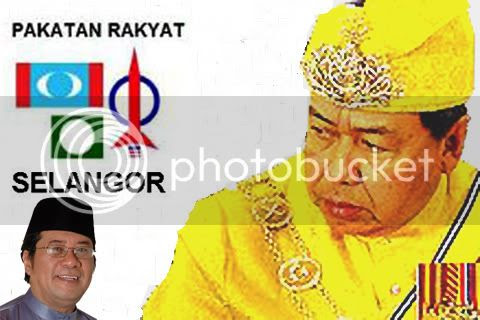 The SELANGOR PALACE has REFUTED Selangor Menteri Besar Tan Sri Khalid Ibrahim’s version of what transpired during his audience with the Sultan yesterday.

The Selangor MB had said the Selangor sultan had acknowledged during his audience with the Sultan that he had NO power over senior civil service appointments.

Khalid had told the rakyat that the Sultan had suggested that the Selangor state government hold talks with the PSC to find the best solution to the impasse, a point which was also refuted by the Sultan’s private secretary today. Khalid publicly told the media the Sultan was of the view that he (the Sultan) had no power to accept or reject candidates recommended by the Public Service Commission (PSC) for executive posts, adding,

“This is because the laws had been amended back in 1993, during the constitutional crisis.

The state laws were amended and centralised to cement the federal government’s hold on the state."

Datuk Mohamad Munir Bani, who is private secretary to Sultan Sharafuddin Idris Shah, insisted today that the Sultan held the executive power, and therefore had the right to decide on Datuk Mohd Khusrin Munawi’s appintment as the new Selangor state secretary.

The Sultan's Private Secretary,Mohamad Munir said in a statement today,

“The Mentri Besar’s press statement yesterday on January 3 saying that that the Selangor Sultan was of the view that he did not have the power to accept or reject any candidates suggested by the Public Services Commission (PSC) is incorrect.

As the chief executive of the Selangor state government, the Sultan gave his blessings to one of the candidates.

The PSD had after that agreed to the SULTAN’s CHOICE of candidate through a letter issued by the Public Services Department following Article 52 (1) and (2)a of the state constitution. This is a convention, a normal practice in Selangor.

The Sultan had actually decreed that the Mentri Besar should have had discussions on the choice candidate with PSC or PSD before the candidates had been presented to His Highness, and not after the Sultan had already given his blessings to the candidate chosen by the PSC (Mohd Khusrin.)

As to the knowledge of the Sultan of Selangor, Mohd Khusrin has been appointed following the proper procedures sanctioned by the Selangor constitution.

The new Selangor state secretary has a right to take part in the proceedings of the state committee meetings as well as the state assembly after signing an oath of secrecy in front of the Mentri Besar,

MB’s plans to have talks now with PSC or PSD after the state secretary had already been chosen is unwise as it could damage the moral integrity of the selected candidate and could create an unhealthy environment with Selangor’s civil service.”

Mohamad Munir also said that the the Selangor Sultan had decreed that the state government present the plans for the amendments of the state constitution to the Sultan first before calling for an emergency state assembly sitting. He stressed that the loyalty oath ceremony between the Sultan and Mohd Khusrin will still take place this Thursday. He said that it was not Mohd Khusrin’s officiation ceremony as state secretary but an “oath of loyalty” ceremony in front of the state Ruler.

Khalid as MB of Selangor announced yesterday that Selangor will hold an emergency sitting of the state legislative assembly to change the state constitution to return to the mentri besar and Sultan the power to appoint the state secretary, state finance officer and state legal adviser.

The country’s richest state has been in turmoil for the past week since the chief secretary to the government named Mohd Khusrin to the post to replace outgoing State Secretary Datuk Ramli Mahmud, whose last day of office was on Friday.

The Pakatan Rakyat (PR) state government has rejected Mohd Khusrin’s appointment and insists it has the right to name its own person for the job.
Posted by Malaysian Unplug at 23:24:00

Khalid was at the press conference and he read his press statement himself. The S'gor Sultan had not given any press statement. It was given by Mohamad Munir, which in all probability must be prepared by Umno non-lawyers, hence their warp stand of a onstitutional monarch having executive powers.

the raayat representative did not agree to the appointment

the PR state Govt was hoping the situation will reach this level of confusion to gain sympathy from the voters of selangor.
MB khaild should have acted earlier to the appointment of the new State Secretary knowing the near end of the previous one is near. PR supporter should seriously consider voting for other party to prevent more trouble from BN, PR is good at talk only!!

Mat Mongol's motto is " I help you , you help me "
There is no action taken against the Sunshine Fleet and there won't be any . Since the palace "helped" and "cooperated" with Mat Mongol.