UPDATED: The Shit-Stirrers in Malay Politics: Zakhir Mohamed aka Bigdog and Shamsul Yunos aka Marahku

The recent uproar caused by two bloggers and Utusan Malaysia show that these three parties enjoy an invisible shield of protection.

Had the situation been different and it was anti-BN bloggers who did the same, the parties concerned would long have been ISA-ed.

So who are the TWO bloggers that triggered the storm?

Malaysiakini HERE reveals that bigdog who wrote that damning article HERE is Zakhir Mohamed who still insisted that the said matter must be investigated thoroughly as it may lead to a surge in Malay and Muslim anger.

He is the same blogger who published RPK's June 2008 SD in his blog that got RPK in trouble with the police. Who gave him that SD when it was sent to the Altantuya murder prosecutors?

Another mystery to be solved?

Susan Loone revealed HERE and in Lim Kit Siang's blog that Jeff Ooi conceded that he did not have much information about the blogger Marahku who also created the storm HERE.

He is CLEARLY linked to Rocky Bru who carried another mischievous posting HERE where he said:

"WHAT WOULD KARPAL SAY?! Did the DAP organise a meeting of Sarawak pastors in Penang last night, and was there a vow to work towards changing the official religion of this country during that meeting?"

Read HERE for more about Rusdi Mustapha aka Barking Magpie /Pasquale, who called Anwar , "Babi" and those against UMNO as "Melayu-Babi"

The blog Marahku has been DELETED . A copy of that damaging post is appended at the end of this letter. (The blog was already deleted as of 9 May 2011) The two most recent posts by Shamsul before the blog was deleted were headlined as "Guan Eng to take action against Jeff Ooi?" and "Rampas kedudukan Islam wujud?"

And Marahku is anonymous no more. Look at the following photograph taken at the 1st Malaysian-Asean Regional Bloggers Conference.

SHAMSUL YUNOS of Malay Mail aka Marahku is the long haired one standing right in front of Rocky Bru in the 2nd row. You can see a clearer and bigger picture HERE.

Many Malaysians from all quarters have asked the police to take action against them!!

WHY HAVE THEY NOT DONE SO YET?

Their identities are known and even their place of work.

THIS HAS GONE FAR ENOUGH. Time and time again, Utusan Malaysia has crossed the boundaries laid down by many laws and got away with it.

Utusan even had the audacity to continue its evil agenda against Christians in its editorial today which insisted that Islam is the official religion of the country under Article 3(1) of the Federal Constitution, and that other races had no choice but to accept this as a fact.

It even said “We know the consequences when the minority of this country play up things which the majority are uncomfortable with."

WHO IS THE ONE STOKING THE FIRE?

The PM told Malaysians to calm down and not to exploit religious issues now being played up in the Malaysian media. THAT IS NOT GOOD ENOUGH!!

Remember how Malaysia Today news portal editor Raja Petra Kamarudin, Seputeh MP Teresa Kok and Sin Chew Daily reporter Tan Hoon Cheng were arrested under the Internal Security Act (ISA) in September 2008? They committed no crime but spoke the truth and yet they were ISA-ed.

WHY HAVEN'T THEY DONE THE SAME TO UTUSAN, Zakhir Mohamed and Shamsul Yunos who write nothing but lies and spins for an evil agenda, possibly for an even more evil person?

TELL US WHY!!!! Where is justice in Malaysia? Are they not going to rest until they stir racial feelings and create strife, animosity and unrest?

PUT A STOP TO IT NOW! ISA those culprits and let the cesspool of hatred be put to an end NOW!

READ THIS DAMAGING POST BY MARAHKU AND JUDGE FOR YOURSELF IF HE SHOULD BE ISA-ED!

Agong under threat? DAP wants to make Christianity the official religion of Malaysia?

Note: All postings including the following article were deleted by Shamsul Yunos 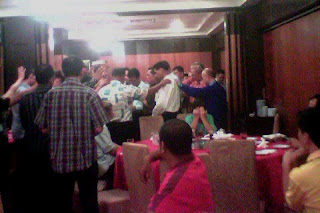 In order to change the status of Islam as the official religion of Malaysia, they would not only have to change the constitution with a two-third majority but would also have to get the consent of the Agong, as head of Islam in Malaysia to demote it to second spot behind Christianity...I think the only way DAP is going to achieve this is by putting a gun to the Agung's head.

History has shown that they have not minced their words when it comes to the formation of the Islamic State and yet the Malay/Muslims in this county has tolerated their rudeness.

I think it is time that we feed them our opinion whole, spare them the bite-size convenience and see how they like to gag on the words of others.

There would be blood on the streets if DAP were to take this vow to the streets and while Opposition types may want to accuse me of making up this story, take a look at the first photo above and the details in this posting and determine if any of this is true.

I hope and pray that it is not true but the photo above is part of two bits of information that came to me this morning and I must say that it really woke me up.

According to the message, last night DAP Jelutong organised a dinner for pastors from Sarawak and overseas at the Red Rock Hotel on Jalan Macalister in Penang and about 100 people comprising people from the consituency service centre, the pastros and jelutong ADUN Jeff Ooi and Kidurong's Chiew Chiu Seng.

Among the activities that night included the 35 pastors taking a group oath. They formed a circle and touched each other's shoulder and vowed in English to make Christianity the official religion of Malaysia and put a Christian Prime Minister in office.

Today the same pastors will take part in a convention at Berjaya Hotel from 9am to 5pm and they will attend a special meeting tonight at the Jalan Khaw Sim Bee Christian centre.

To put it in further context, we should remember that in Sarawak, the DAP had said that BN is anti Christ agent, a seditious statement and religiously divisive statement that was never investigated by the police. or at least they did not tell us about any investigations on the matter.

They are openly against BN on religious grounds and they are now making it their clarion call, their rabble rousing horn. 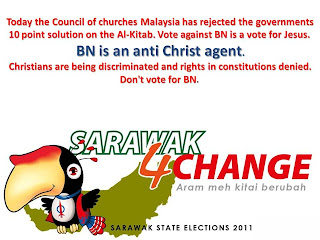 The DAP can make their vows, that is their right but if they are planning to usurp the constitution and the Agung then something should be done by the authorities

Stop making excuses, as an Islamic country, Malaysia has been tolerant of all religious views as long as it does not encroach into Islam and in Sarawak where the Christian population is significantly larger than the Muslim community, there are more churches than mosques to reflect the situation.

What more do they want from Islam?

If true, this vow organised by DAP Jelutong is yet another insult to Islam and the Malays in Malaysia, for 50 years they lived in this country and worshipped under the protection of Islam and yet today they have taken the seditious position of trying to remove Islam as the official religion of the country that has given them so much.

The foreign element involved in the vows makes the event even more traitorous and I would like to take this opportunity to ask everyone to try and find out if this alleged vow did actually take place.

The authorities must never allow seditious elements to organise themselves and gain mass, if they do, it will be hard to stop them and this country may find itself shattered again.

WHAT'S WITH YOU, BIG DOG?

Yes, what got into you?

You were always amongst the first to wish me at CNY and Christmas.

I cannot forget that.

When I visited you after your operation at DMC you expressed appreciation that I was amongst the first Chinese friend to visit you.

We talked about a new Malaysia from your hospital bed……

You wanted a new Malaysia for girl-girl

I wanted one for whomever Kevin my son fathers

We blogged against Badawi for a new Malaysia.

"Malaysian Bloggers Alliance for a New Malaysia " was taken for a ride by these Pro-Mahathir Camp in UMNO Bloggers to get rid of Tun Badawi and Khairy Jamaluddin before the 2008 Election
Somebody at NPC called you a fat lump of sh--!

I asked that someone to apologise and as a gentleman he personally did just that at a forum in Aman Suria.

You expressed surprise at that.

Your steadfast support of Mukriz and TDM is commendable.

We all have our causes.

Mine was always focused on a new Malaysia, free from corruption, racism and religious bigotry.

I blog against any party or individual that attempt to derail my focus.

After 308 it was inevitable that we went our way, yet remained friends.

The last time I met you was at Ahmad “Kerp” Daniel’s wedding. We shook hands and exchanged pleasantries, after which I was chided by an Anfield supporter who said that you were an enemy. My reply was simple, “Not enemy, adversary maybe.”

You see Big Dog, I don’t have much time left and I place my bets on Pakatan. Should I still be around if they take over, I will be the first to zap them for any misstep.

You have still many years ahead of you. You have a lovely daughter GIRLGIRL. Did you consider how it would affect her, your preposterous posting that is.

I still want to remember you as the rotund guy with an amiable disposition.

So what really got into you?
-Zorro Unmasked
Posted by Malaysian Unplug at 23:44:00

What a country ? Do as what you like .... but be sure you are pro govt n it is SURE OK.....A shameless way to govern the country.

well, that dog is literally big compared to other dogs. as for the pig, his daughter is living in the UK married to a mat salleh. so much for hidup melayo i supposed.

read these on another view of this topic

Our blogs have lost credibility. Now you have Blogs For Sale.

PS I am directing people to your Blog. Good Luck