Lim Guan Eng (LGE), if he’s a kopitiam boss or a roast pork seller, would not get the attention (and trouble) he’s getting now. In fact, nobody would care that he had struck a good deal getting himself a bungalow for RM2.8 million – a crazy discount to market value. At 10,161 square feet, his bungalow in Jalan Pinhorn, Penang, was a steal at RM276 per square foot.

Unfortunately, Mr. Lim is no ordinary Chinese Ah Pek but the Penang Chief Minister. The worse part – he’s the leader of an opposition party DAP (Democratic Action Party) who commands 90% of Chinese votes. Therefore, whenever he buys or sells something, the price must be “ngam-ngam (precise)”. He can neither buy a bungalow below nor above market price. 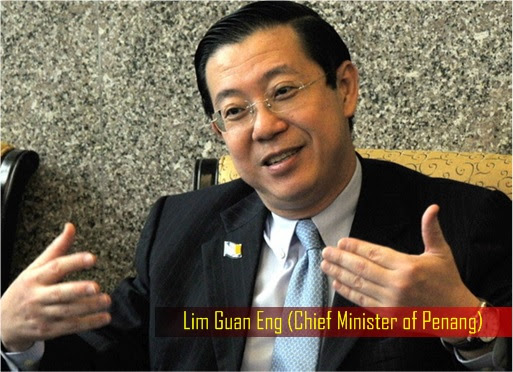 In other words, Lim Guan Eng can never own a bungalow worth millions. Unless he switches sides to UMNO, he can only rent a bungalow or buy a condominium within his financial means. That’s because condominium should roughly fetch the same price within the same block, unless heavily renovated, unlike a bungalow sitting on a 10,161 square feet plot of land. 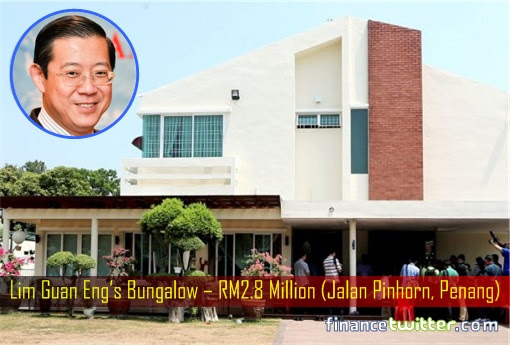 In the same breath, Mr. Lim would get himself into trouble too if he plans to buy some properties through “lelong (auction)”, a normal process conducted by banks to get rid of real estates seized from past owners who couldn’t pay their scheduled mortgage loan. Again, he must ensure the price he bids for lelong properties must be “ngam-ngam” (*grin*).

Apparently, the seller of the bungalow, Miss Phang Li Koon, has signed a SD (Statutory Declaration) to relieve pressure on Lim Guan Eng. It seems the seller was a great admirer and supporter of Mr. Lim. She was also a close friend of the Chief Minister’s wife, Betty Chew. So, it was a “goodwill sale”after the Lim family rented the bungalow since 2009 at RM5,000 per month. 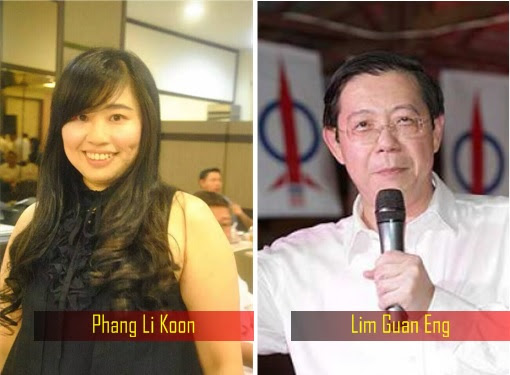 There’re 1,001 reasons why Guan Eng could buy the controversial bungalow for RM2.8 million, well below market price, if he was an ordinary folk. The bungalow could be haunted. Miss Phang has a crush on him. Betty Chew was a world class haggler she often gets free McDonald’s meal. Miss Phang was so touch because Guan Eng has taken care of the bungalow – polishing and waxing toilets daily.

The Penang Chief Minister claimed that he had bought his bungalow on a“willing buyer-willing-seller” basis. After all, it was a 30-year-old bungalow with “no” swimming pool (*grin*). He took a bank loan of RM2.1 million and paid the remaining RM700,000 in cash based on his income as the chief minister and an elected representative. 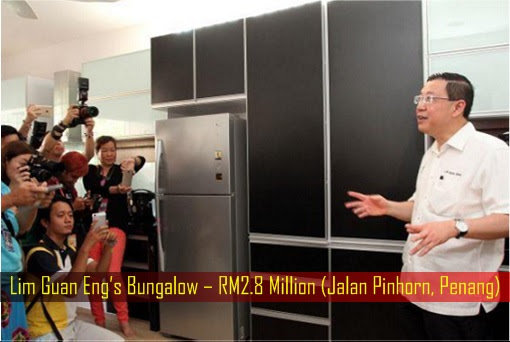 But that was exactly what had happened to former Selangor Chief Minister Khir Toyo, screamed UMNO politicians and bloggers. Mr. Khir had used “willing buyer-willing-seller” argument to justify his purchase of two plots of land and a bungalow in Shah Alam below market price. Still, he had failed to convince judges and was sentenced for 12 months behind bars.

Using Khir Toyo’s case as a yardstick, Lim Guan Eng should therefore go to prison too. Actually Khir could be saved by UMNO and need not go to jail. However, he was one of Mahathir’s boys so when Badawi and Najib took over, he was flushed out of favour. And when he lost the Selangor state in the 2008 national election, he was of no use to UMNO. 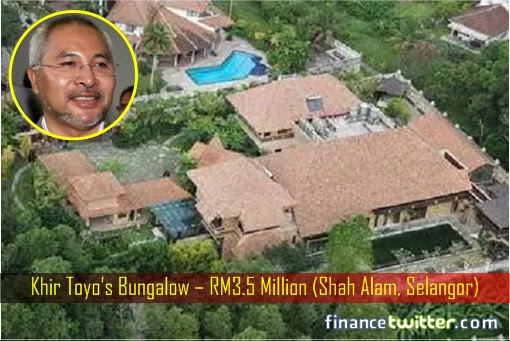 That was why Khir was officially charged in 2010. That was why out of hundreds of UMNO leaders who purchased bungalow below market price or even given free by businessmen, only Khir was charged. That was why UMNO didn’t instruct judges to close one eye on Khir’s case, as they normally would. But how different was Khir Toyo’s bungalow scandal to Lim Guan Eng’s? 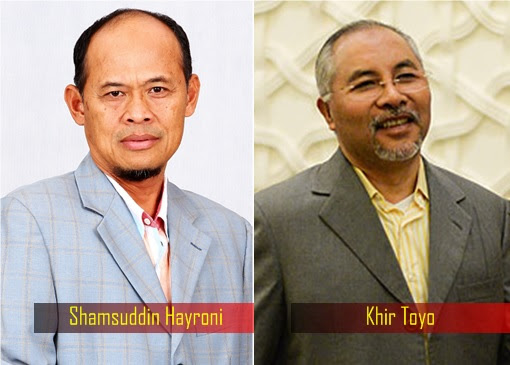 It would be extremely stupid for Lim Guan Eng, an accountant, to get himself into corruption in the purchase of the bungalow, knowing very well Malaysian Anti-Corruption Commission (MACC) and the rest of the government agencies are eyeing his every single move. There’s simply no case against him because he had taken all the necessary precautions to prevent from being trapped or implicated.

Khir Toyo was found guilty primarily because what the courts did not look kindly upon was the fact that the said property was bought (by Khir) at a lower price, compared with the much higher price when the property was purchased by (seller) Shamsuddin Hayroni. So the keyword here is purchase price andselling price, NOT market price. 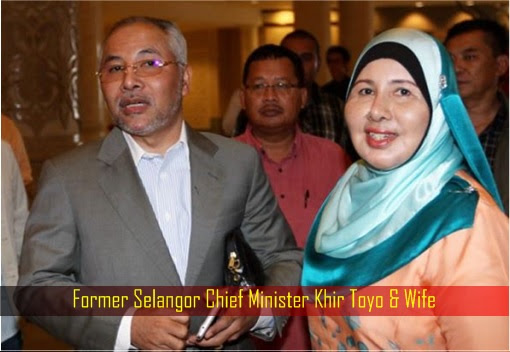 But as long as Miss Phang didn’t make any losses selling her bungalow, judges may find it hard to compare Guan Eng’s case to Khir Toyo’s. She had made a cool RM300,000 or 12% profit on his investment of RM2.5 million on the property. And based on her SD, it was clear there were elements of goodwill, respect and gratitude due to Guan Eng’s administration of Penang. 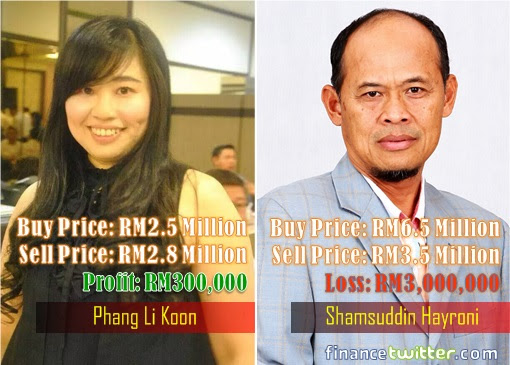 There’s no law that says one cannot sell real estates at below “market price”, as long as one doesn’t sell it at a loss – below “purchase price” – without a compelling reason. There’s little doubt that “willing buyer-willing-seller” applies in Lim Guan Eng’s bungalow transaction but not Khir Toyo’s. Perhaps UMNO doesn’t understand how Chinese do business.

As far as Miss Phang is concerned, the sale was still a good deal because she didn’t lose money. She just made less profit. Not all business deals must be done with maximum profit. That’s why IT Mall, Low Yat Plaza, is doing a roaring and long-term business despite making lesser profit margin than UMNO-sponsored MARA Digital Mall. 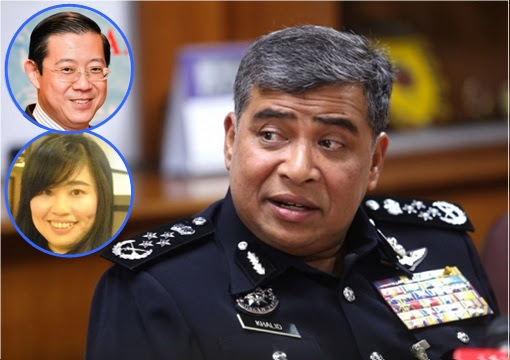 What Najib administration has, however, is the indirect link between Lim Guan Eng and Miss Phang Li Koon. And you can bet your last penny that UMNO will use its usual tactics – threat, intimidate, harass, bribe – on the Chinese woman until she changes her SD, the same way private investigator Balasubramanim and his wife did on the Altantuya murder scandal.
Posted by Malaysian Unplug at 18:25:00