The Penang "UMNO-MAMAKS" are learning a thing a two about street demonstrations from their fellow INDIAN brothers and sisters of HINDRAF.
Read here for more on Mahaguru58 Blog and HERE on the demonstrations in Penang 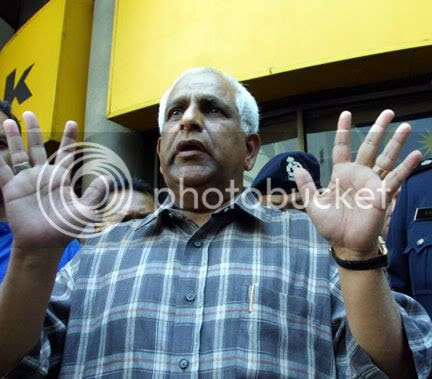 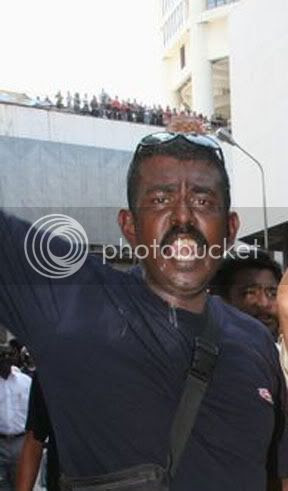 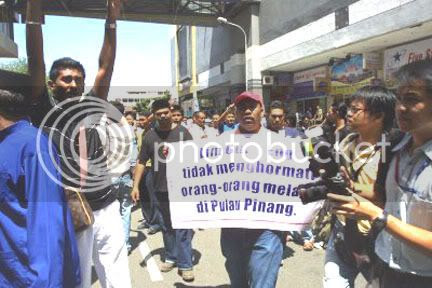 The UMNO-Mamak connection in UMNO Youth and UMNO Putra
The two powerful "mamaks" in the politics of UMNO Youth and close buddies of the son-in-law, Khairy Jamaluddin (see photo below) 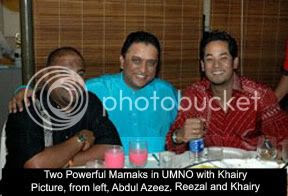 Abdul Azeez Abdul Rahim managed to get himself appointed as Ketua Umno Putera. He stood for the state seat of Baling (Kedah) and lost to the PAS candidate.

Reezal Merican Naina Merican is the Political Secretary to the First Finance Minister-cum-PM Abdullah Badawi and he is a member of the Kepala Batas UMNO Division and he also holds the position of President of Peninsular Malay Students Coalition (better known as GPMS).

An (Indian-Muslim -"mamak"-) lawyer lodged a police report against Penang Chief Minister Lim Guan Eng over his statement that he would run the state administration free of the New Economic Policy (NEP).

Abu Backer Sidek Mohamad Zan, 40, lodged the report at the Jalan Patani police station. He told reporters that in his statement he had asked the police to investigate Lim under the Sedition Act and to take action against Lim if he continued to make seditious and racist statements.

“I believe that the statement is seditious, racist, irresponsible and may endanger public peace and national security,” he said.

" In September 2005, the Malaysian Indian Muslim Congress (Kimma) passed a motion seeking the Government to give MALAY status to Indian Muslims born in the country.

In the eight-point motion, passed at its 30th annual general meeting, Kimma cited provisions in the Federal Constitution, which stated that a Muslim who could speak Bahasa Malaysia and practise the Malay culture was regarded a Malay.

The contents of the motion, among others, stated: “The Indian Muslims adopt the three elements but still cannot get the Malay status. If there is a problem in doing so, at least give the bumiputra status as is being done for the Portuguese”.

The motion was handed to the Prime Minister's political secretary Datuk Othman Desa who opened the meeting.

Kimma is also asking for a special quota for the Indian Muslims in the allocation of low-cost houses, places in public institutions of higher learning, scholarships and employment opportunities. It also wants two of its members to be appointed as senators.

On the political side, the congress also passed a motion to apply to become a member of the Barisan Nasional coalition and would gladly accept to become a coalition party in Umno.

In 2006, Bernama reported: "The Malaysian Indian Muslim Congress (Kimma) Saturday decided that it will AFFLIATE itself with Umno, after having failed to get admitted into the Barisan Nasional coalition over the last 28 years.

Its president, Amir Amsaa Alla Pitchay, said a memorandum on the matter would be forwarded to Umno secretary-general Datuk Seri Radzi Sheikh Ahmad next week.

He said the decision to affiliate with Umno was taken at meeting of the party's national working council held here today.

Asked why Kimma wanted to affiliate with UMNO and not the MIC or other Indian parties, its deputy president Kamal Batcha said: "The issue here is one of religion." Based on that, Kimma had an option -- join Umno or PAS, he said.

Asked what would happen if Umno, the main component in the BN, rejected Kimma, he said: "We will continue to support the BN. We will keep trying even if we have to wait another 10 years."