The Really PATHETIC Malaysians: Too Busy to Register to Vote !! 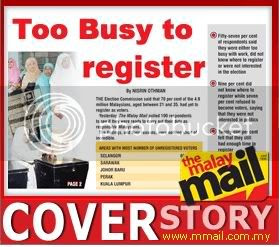 "People deserve the government they get."
- Tun Dr. Mahathir

TOO occupied with work.

That’s the excuse given by those aged between 21 and 35 for not registering as voters.

The Malay Mail conducted a telephone survey yesterday, calling 100 respondents at random to find out whether they had registered as voters following the Election Commission’s statement that 70 per cent of the 4.9 million Malaysians who have yet to register are in that age bracket.

Our findings showed that 57 per cent of those surveyed NOT registered, citing being too busy with their work, did not know where to register and not interested in the election as the excuses.

From Letter to Editor (Malaysiakini) : Read here for more

"I refer to the letter, Gov't not showing empathy with common man, .....that the government should be more attuned to the public or voters lest they 'abandon ship'.

.... The Barisan Nasional government has turned into a regime, a regime that is UNACCOUNTABLE to the people.

How would you explain a government that does not give scant regard to the public whose main lament is simply that the rising cost of living and the effects of the one-sided agreements with the monopolistic toll concessionaires are unfair to them.

The very nature of a regime is that it does not answer to the public. As it is, the check and balance system of a democratic society is NOT applicable here.

The Election Commission is NOT an independent commission, voting fraud is common.

Whistle-blowers and protesters are beaten and detained WITHOUT trial just to stifle opposition and to allow the ruling party a free rein to abuse their power for personal gain.

Let this humble writer, who is nothing more than an ordinary Malaysian,.. paraphrase Abraham Lincoln, the government should be of the people, for the people and by the people.

Sadly, this is NOT the case in Malaysia. Not even close..."
-Jakers Lambert
Posted by Malaysian Unplug at 21:03:00

A sample of 100 is not representative of the voting population aged 21 to 35; generally for such surveys, a more accurate one would use about 1000 respondents.