... (On the swing of Chinese votes to UMNO/BN), the Chinese community has been keeping a close watch on Pakatan's progress, especially in Selangor, since the last general election.

They see that we are not serious in proving our unity with the internal conflicts we have been facing lately.

The Chinese wanted to send a clear signal to Pakatan to teach us a lesson.

Pakatan need to be more serious in addressing the woes faced by the INDIAN community. Pakatan is not doing enough. In the last (general) election we got strong support from the Indian community... they had no choice, there was no alternative and they had high expectations of Pakatan.

I would say that their (Indian) support is not as solid as it was in the last election (for Pakatan)..." Read here for more
- Salahuddin Ayub,
PAS Vice-President 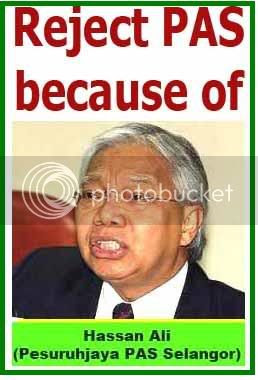 A landslide win for Mohd. Isa could only signify a few pertinent things.

Bagan Pinang is a small township:
The Election Result:
The CHINESE and INDIANS Overwhelmingly Voted for Isa Samad

Look at the percentages. The figures do not lie.

The answer is easy. It came from the Indian and Chinese voters.

The total of both the Indian and Chinese voters is 31.8%.

This means that more than two-thirds (68.6%) of Chinese and Indians voted for Mohd. Isa.

Pakatan had better start doing something about it cos they need to win over such rural voters, and not just rely on the urban voters.

Relying on the non-Malay voters in Bagan Pinang was evidently disastrous.

In 2008, about 80% of the Indians and 65% of the Chinese voted opposition. (These figures are obtained from political analyst Dr Wan Abdul Rahman Wan Abdul Latiff.) That is approximately 74.8% non-Malays voting for the opposition. Now it has dropped to 31.4%.

Why are these state seats so important when the formation of the federal government is decided by parliamentary seats?

The answer is this – can Pakatan guarantee parliamentary victory during the next elections?

If the answer is in the negative, then it is these state governments that Pakatan must attempt to secure and subsequently be utilized as a home base to propagate the Opposition ideology and to inhibit the BN propaganda.

So, what does this BN victory means? It damn well means a lot of things but mostly, it means that :
If Pakatan does nothing, the next election is as good as lost.

2013 is another 3 years plus of BN rule and Najib will be utilising this time to consolidate his position.

If Pakatan does not make any progress between now and then, it will be 2018 before anything can be done and who knows whether Malaysia will still be solvent then.

(What ) Bagan Pinang reminds is that PAS CANNOT assume that it will become the default beneficiary of Umno’s ailment.

While Umno may be corrupted and may even field a tainted candidate, the fact remains that voters in Bagan Pinang and many other pockets of the country will still opt for Umno than PAS.

However, PAS can do wonders to change that scenario if it can craft a moderate enough message and image to appeal to the centrist voters.

PAS’ breakthrough will come precisely when it can win in a demographic such as Bagan Pinang. And that will require being able to reach enough non-Malay and Malay centrist voters.

Umno’s corruption may be disgusting, but enough voters still seem to be suspicious of PAS’ EXTREMISTS. Read here for more

PAS will lose more bi-elections if ...IF they ignore non-muslims' feeling & supports !
MB Nizar, sorry for u !