The abovementioned parties' application for an injunction has been fixed for a hearing at the same court on January 30, 2007 at 9.00am.

My lawyers are now taking care of it.

If you have sensitive information to share with me, please STOP sending it to my Gmail account.

You should, instead, send it to my paid, secure email service at:
jeffooi@hushmail.com 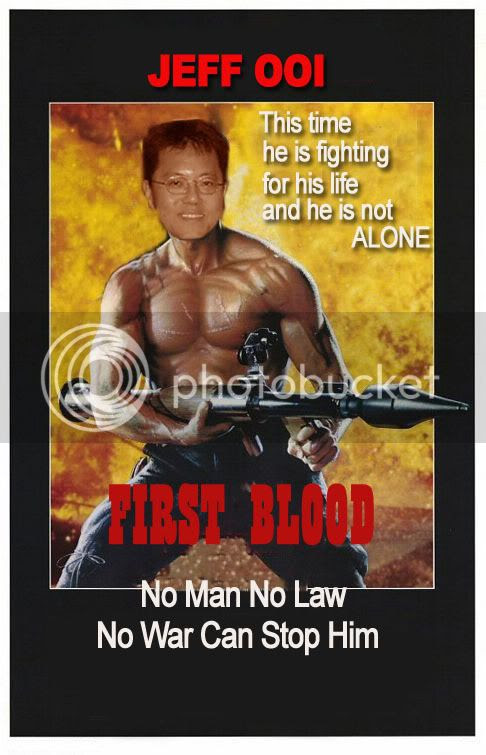 "..... The defamation proceedings launched by the New Straits Times Press (NSTP) against two bloggers, Jeff Ooi of Screenshots fame and Ahirudin Atan who runs Rocky’s Bru is a grave development in the defence of the legal rights of bloggers and citizen journalists in Malaysia to break the stifling monopoly of the mainstream media.

No responsible blogger will claim absolute freedom of speech and expression on the blogosphere, including the liberty to defame with impunity the character of others....

There must be space on the blogosphere however for free and fair comment, which is anathema in the mainstream media where important national issues and prominent personalities are concerned.

As these are the first two cases of Malaysian bloggers being sued for defamation, it will have far-reaching consequences for the healthy, mature and democratic growth for free speech and expression, not only on the Internet but in the country as a whole.

- firstly, that there is a level playing field in the defamation proceedings particularly in terms of financial resources and capabilities, and

-secondly, that the legal rights of bloggers and citizen journalists are properly developed and entrenched in keeping with the imperatives of an information society and knowledge economy which Malaysia aspires to become."
-Lim Kit Siang


What Malaysian readers are saying:(Read here and here for more

"... if someone could mobilise a ‘JeffOoi Defence Fund’, I’d like to get a few friends to chip in. And to JeffOoi, it would be trite to say to you : “When the going gets tough, the tough gets going’. I think you already have the constitution of a champion horse. Keep running, man. If the sands burn under your feet and it gets scaldingly hot, we’d all understand if you decide to go Down Under or scoot to the States. You’d do much better there though this Bolehland needs you more."

"....while I share concerns about the implications of the defamation proceedings, I do not think this will in any way affect freedom of speech in Malaysia. In fact, I think this will spur more Malaysians to speak freely and responsibly against any trangressions or infractions or malfeasance by anyone seen to commit such offences. This is a civil suit. Let the courts decide. And I am sure lawyers in Malaysia will ensure that all parties get the best counsel in this case."

"....This is a test case to frighten all bloggers. The government are already facing a lot of critisms inside and outside the country and they do not want to be the bad guy to crack down on bloggers directly.They are using the fall guy tactics where they have nothing to lose but everything to gain.Choosing jeffooi and rockybru blogs are much easier than malaysiatoday knowing RPK is a much tougher guy.I had stated in my earlier post in other topics that bn is thinking very hard how to get the bloggers and this case is just a start to frighten everyone.If this fail, I am very sure a more tougher and direct method will be used."

"...Listen up guys!! I think the best way we can help Jeff and Rocky (at the same time send a clear message) is to start a legal defense fund raiser for them. Perhaps Malaysiakini can assist by utilizing its existing payment gateway and getting a proper trustee and auditor."

"....The civil suits against Jeff Ooi and Rocky have really spooked me, so from now until the two of them become discharged bankrupts, I’m gonna lay off the serious stuff and just blog on gardening, tai chi, music and, occasionally, on more serious stuff like why prolonged virginity is a cause of depression which induces a bipolar personality.

me: how are things at work?

me: u fuckers really need to work meh? i thought, i was told anyway, work means straining the nerves in the eyes checking out young female interns’ bodily assets.

dua_kali_mullah: Ooi! don’t play dumb la. He talks so much shit, so much that it affects the morale of the staff.

me: i think it’s blocking the access to his blog that’s more demoralising cos they now gotta Starbuck during lunch to catch up on real news. hehe

me: wht’s this we hear about malay mail being sold?

dua_kali_mullah: the truth is out there

me: and i supposed the grand scheme in keeping the Weekend Mail suspended is to actually save money, right? cos it’s cheaper to keep it unprinted than republishing again

dua_kali_mullah: hang on. got to go pee. brb.

me: no comment say no comment la, don’t say got to go pee. cya around. time for lunch.

Some people have suggested boycotting the NSTP stable of publications to protest against the shameful civil suits against bloggers Jeff Ooi and Rocky.Well guys, let’s open a new beachhead, let’s shun Monsterblog too.Remove your links to the mind control monster. "
- READ HERE


".....Someone said to me: I just smell rats.... it's more to do with vengeance and settling a score...it's personal by observation." I couldn't agree nor to disagree. The battle of waterloo had to take place, someday and one day. As a fellow blogger, and in the name of freedom of speech and expression, in accordance with the basic human rights, we Malaysians need to voice our deep concern of the observed situation and predicaments we are now facing. We could not have voted in a government to curb our human rights and to force us to succumb to arbitrary law or neither allow the system to rule by discretions which curtail the basic freedom as entrenched in the rule of law and natural justice. had for the past weeks reluctant to include this tag logo, as it had been taken to connote defiance or anti-establishment.

But, with the current events happening, I could not sit and stay on the fence, watching the society been torn into pieces by the "powerful forces" within the oligarchy.."
- READ HERE
Posted by Malaysian Unplug at 20:52:00