The Time is Right:Merge UMNO, MCA and MIC into a Single Political Party. Or Is It ? 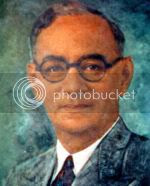 ".... More than 50 years ago, Datuk Onn Jaafar floated a suggestion that Umno membership be opened to the people of Malaya, irrespective of their ethnicity.

The rejection by members of a party that he was a founder and the president proved too much for Onn, who shortly after left Umno.

The idea was indeed ahead of its time.

The Malays then were primarily concerned with gaining independence for a land they called Tanah Melayu, and as the name suggests, it was a land they considered theirs, and by and large, theirs alone.

They were NOT yet fully exposed to the cold reality of the need for compromise that was to emerge in the period leading up to independence.

But soon enough, it became clear to the political parties in existence that cooperation was the only way forward.

This realisation resulted in the Alliance (and later on the Barisan Nasional) which exemplifies the unique approach of communalism tempered by compromise and restrained by the need for consensus.

But the approach is far from ideal.

Malaysia will soon be 50-years strong.

All of us have grown to understand and accept that one Malaysian has just as much right as the other to call this country theirs.

...... it is time our political leaders blow the dust off Onn's initial idea.

A merger of the component parties into a single entity.

And why not? But from time to time, the ugly head of extremism rears itself, even among the close ranks of the coalition.

.... our unity has deteriorated in recent years due to the emergence of several issues that seem to have exposed weaknesses in our ability and willingness to compromise.

A merger of the Barisan component parties: No one should underestimate the great effort it will require. And it will take time.

But as we approach the 50th year of our independence, there is no more appropriate moment to tell Malaysians that there is a plan, with targets and milestones set, to reinvent the politics of this country and finally breath life into an idea whose time has come.
Posted by Malaysian Unplug at 21:36:00