Because Home Minister Hishamuddin Hussein Didn't Like His Own Press Conference, He Demanded It Removed from Malaysiakini Website

WHAT AN IDIOT OF A HOME MINISTER

ARROGANCE OF A HIGHEST DEGREE 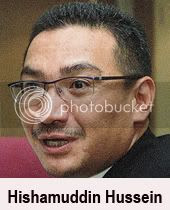 The MCMC directed Malaysiakini to remove two video reports from its site and from YouTube on the cow-head protest by some 50-odd scumbag Muslims.

One of the videos is of Home Minister Hishammuddin Hussein's press conference held on 2nd September where he defended the cow-head protestors.

The MCMC officers have visited Malaysiakni office twice and had demanded Malaysiakini hand over the original tapes of the two video clips.

This is the letter to Malaysiakini demanding that the video clip of Hishamuddin's press conference be removed from Malaysiakini website and from Youtube. 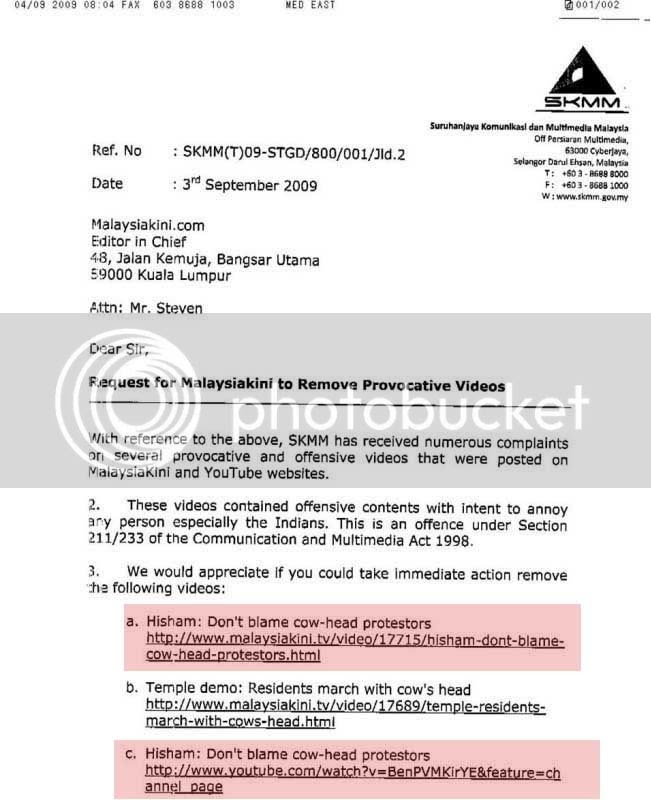 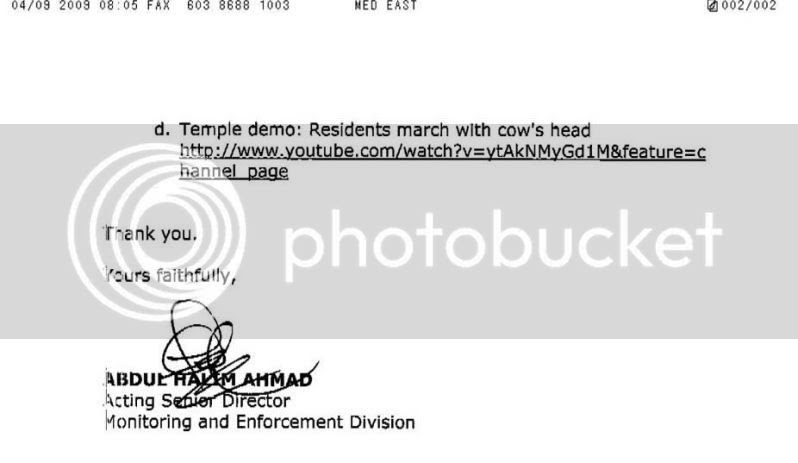 Hishamuddin came out blazing to show he is a champion of these scumbag muslims, and even justified their action in insulting the Hindu faith. He even suggested he was not in favour of legal action to be taken against any of the protestors.

At the press conference, he threatened OTHERS not to create trouble while defending the action of these 50-odd scumbag Muslims of insulting the Hindu faith and for their willingness to have a bloodbath if the temple is relocated in Section 23,

This is what he said at the press conference

"...They, the organisers, who are sitting left and right of me, didn’t even know that somebody was going to bring the head of the cow during that demonstration. All that they wanted to do was to voice their unhappiness about the willingness of the state government to listen to their requests.

I was told that even the Hindus there are not so passionate that it is built there (section 23).If I wanted to use the issue to create chaos in Selangor, I can but we didn’t take such actions.

I have it in my records to show there were cases where a pig-head was used by irresponsible parties including leaving the head in front of an Umno building covered by an Umno flag. Why would we want to penalise anybody?"


By the next day (3rd Sept) , he must have woken up and realised his utter STUPIDITY of what he said at the press conference.

So he made a u-turn.

He called for stern action against those involved in the cow-head protest in Shah Alam last week. He even told the police to proceed with investigations and bring to court those who brought the severed cow-head to protest a Hindu temple relocation.

Here's the ultimate arrogance of Hishamuddin the Home Minister.

Instead of apologising for his shameful performance at the 2nd September press conference, he wanted to erase history and assumed nothing had happened or rather the press conference did not exist by asking Malaysiakini to remove the video clip of his press conference .

He did not ask the police this time to harass Malaysiakini, instead he got MCMC to do his hatchet job.

So MCMC has to come out with an excuse to abide Hishamuddin's demands, one of which is to remove the video pertaining to HIS press conference.

So the following reason was concocted by MCMC: The cow-head protest videos in Malaysiakini website:

For God sake, it is HIS own press conference that was in the video. It was what HE SAID that is offensive.

Malaysiakini as a news portal had simply reported what he said. And he got his fellow UMNO Minister in the Ministry of Information to ask MCMC to blame Malaysiakini for "annoying" Malaysians with the video recording of his press conference.

The next day when he suddenly saw himself appearing stupid and embarrassed, he decided to erase HIS offensive remarks in people's memory. So, by the power vested in him by his cousin, PM Najib, he as Home Minister asked MCMC to write to Malaysiakini to remove the video clip on HIS press conference.... or else.

Who does he think he is? That is fine to do what he did without any furore in a Stalinist state like in North Korea. 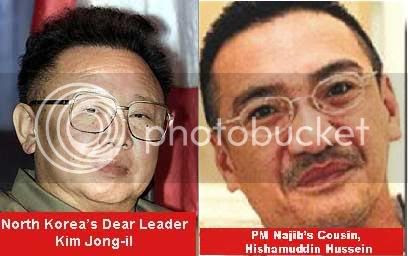 One of a kind in the abuse of power
Hishamuddin as Home Minister is aping the Dear Leader, Kim Jung-il and treating Malaysia as a South East Asian version of North Korea.

He can undoubtedly able to bring to their knees those UMNO-controlled media ie New Straits Time, to Rocky's Bru's Malay Mail or Utusan Malaysia.

As for the video clip on his press conference and the cow head protest, even if they are removed from Malaysiakini website, they will remain in Youtube for a long time as there already copies made and distributed in Youtube by those who would not want Hishamuddin to erase or rewrite history as he saw fit.

Watch this interview with Malaysia's Steven Gan on the harassment by MCMC on Pop-TV and what Steven Gan had to say of the MCMC officers coming to his office in Malaysiakini:


Recapping What Transpired on the Cow Head Protest and the Fallout

On 28 Aug 2009, in a Muslim holy month of Ramadan, a group of 50-odd scumbag Muslims after completing their Friday prayers at the State mosque, decided to parade a cow-head in Shah Alam as a protest against the relocation of a 150-year Hindu temple at Section 23.

During the protest and under the gaze of the police, these scumbag Muslims threatened bloodshed if the Hindu temple was relocated to their neighbourhood. The cow is considered sacred in the Hindu faith.

Thus, the parade of the cow head in protest of the relocation of the Hindu temple was calculated to incite hatred by Malaysian Hindus and Hindus in general and to insult the Hindu faith by denigrating the cow in public.

Dozens of riot police stood by and watched as protesters brought the severed cow-head to the Selangor state secretariat and stomped on it.

The police did absolutely nothing about it and in fact had the front seat as spectators allowing the whole drama to be played out.

Malaysiakini journalists were present, so they reported it and video-taped the protest. The video clip was uploaded onto Malaysiakini website and YouTube as supporting evidence of Malaysiakini's report of the scandalous incident. 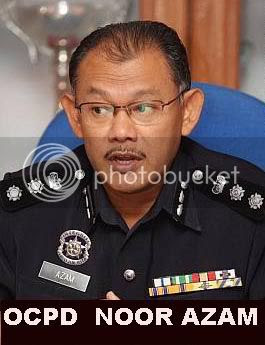 Muslims and non Muslims throughout the country expressed disgust of the whole incident and questioned why the police did not act against these scumbag muslims.

Timidly the next day, (29 August) the Shah Alam OCPD ACP Noor Azam Jamaludin held a press conference and gave the excuse that police had failed to act during the cow-head demonstration because the situation “did not permit” them to do so. He said it was only a small group protesting and he added:

"We saw the situation was not right because we did not want to spark more anger .”

We ask, since when is the police afraid of a crowd of 50 protesters on the street?

It was one of the most unconvincing and cowardly responses ever to be mouthed by a senior police officer.

Hishamuddin then met those protesters and held a press conference on the 2 September, defending and justifying the action of these scumbag Muslims in insulting the Hindu faith, even in their willingness to have a bloodbath, threatening the security of the country.

The next day, Hishamuddin retracted from his press conference and called for stern action against these scumbag Muslims.

The Selangor Govt through the Shah Alam Town Council then called a town meeting with these scumbag muslims and residents of Section 23.

The following video speaks for itself for the "samseng" behaviour of these scumbag muslims :

Caught in a corner, the UMNO-led Government then decided that it had no choice but to charge 12 of the scumbag muslims for sedition.

We will wait whether the law will be made into a fool when the case comes up in court. 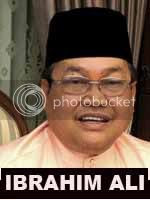 Meanwhile the Malay NGO, PERKASA, under the leadership of Independent MP from Kelantan, Ibrahim Ali (read here) is launching a JIHAD to defend these low-life scumbag muslims who not only:
Only God/Allah can save Malaysia from the dangerous politics of Hishamuddin Hussein, our Home Minister, PM Najib's cousin, son of Tun Hussein Onn and grandson of Datuk Onn Jaafar, because this UMNO-Govt cannot and Malaysians unwilling.
Posted by Malaysian Unplug at 03:49:00

Hishamuddin is a total idiot - please don't compare him with the North Korean leader who is an intelligent man since he is brave enough to tell the Americans to go fly kites.
Kerismuddin - go kiss the Pig's arse you moron!!! Bet the pig will fart on your idoitic face.

1) The police stood by to afford them protection.
2) Do face met them and had a full press conference with his terrorists lieutenants on either side of him.
3) He defended their actions and justified everything they did.
4) There are at least 50 protesters and only 12 are being prosecuted. Where are the others?
5) The terrorists are all being treated as heroes by the press which is controlled by BN.
6) The same group went to the town hall meeting and behaved in a manner which does not do credit to any human being. No action is being taken against them.
7) Has UMNO taken an official stand on this matter? No.
8) A number of NGOs call them jihadist and foot their legal fees.

If this is not state sponsored terrorism, what is?

Remeber Rais Yatim for sneering at the journalist to speak out in Bahasa Melayu only instead of English? Sheer arrogance from another Menteri. Malaysia has plenty. They think and sound the Almighty themselves. They disconnect with the rakyat. Is this the Government we want for ourselves and our children?

dog faced,always crying mode and full of stupidity look is what kerismuddin is all about. i am sure that had he not been a minister he would have headed the demonstration of the 50 making it 51 members