The following was what Raja Petra Kamarudin of Malaysia-Today wrote on 23rd April, 2007 (Read here for more):

And why do I say this?

Well, take a look at the Election Commission (SPR) Voters’ Registration below. It is just three pages but these three pages are enough to prove my point.

And if you want the whole book then you will have to pay for it because SPR sells the voters’ registration book on CD format; it is not free.

And they (Election Commission) will sell a different version to the opposition (minus some crucial information) while Barisan Nasional will get the FULL version.

Anyway, note the following from the three pages below: 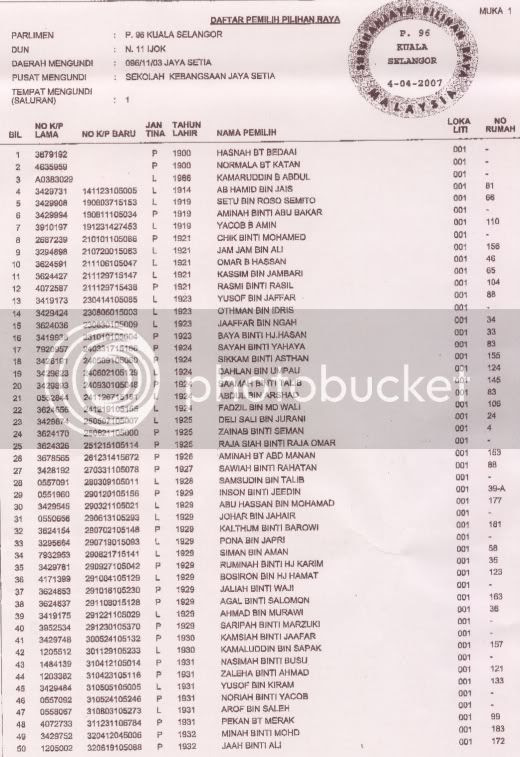 The same is repeated. 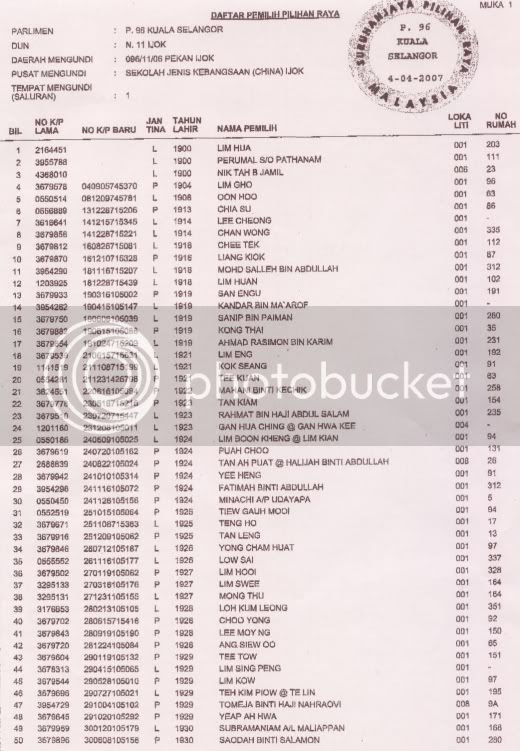 Then, in sheet three (voting locality SEKOLAH KEBANGSAAN BUKIT BADONG):
I wonder whether he has even been circumcised yet? 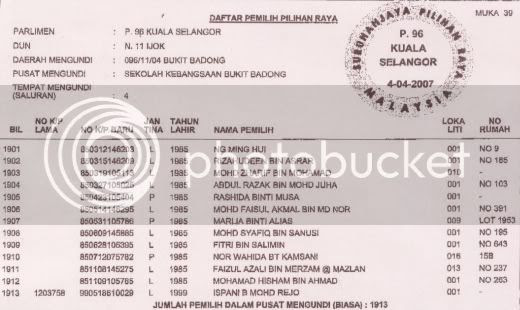 Yes, that’s right! Barisan Nasional will win by more than 1,000 votes instead of losing by 500 votes.

Anyone still wants to hedge my bet.

Let’s just make it a mere teh tarik somewhere in Bangsar because I don’t want you to lose big -- just a token bet.

"...Anyone can see that the resources and sheer weight BN threw behind this campaign was shocking – all this for a seat that would have made no difference to either the Selangor or federal government. Why?

They threw the kitchen sink at PKR in Ijok because they knew that to lose even one electoral inch to the only party that can and will lead Malaysia's first political revolution is to take its first step to guaranteed extinction.

The only reason Umno (the only truly relevant BN party) and their preferential policies that give rise to a bottomless pit of corruption can maintain its slimy grip on Malaysian politics is incumbency, and the power that comes with it.

Ijok showed in the starkest terms possible how far Umno is willing to go in order to stay in power – 'dulu, kini dan selamanya', as they like to say.

The core of this strategy is as simple as it is effective: VIOLENCE.

Slogans like "Gerak Gempur" and "Pemuda Umno Gempur, PKR Terkubur" are starkly unmistakable examples of the ethos of violence that is insidiously being propagated within the younger ranks of Umno.

.... they know full well that there is no other way Umno can remain relevant and in power.

Umno has NOT always been a party with such violent tendencies. As a Malay party, there must have been periods where core Malay values such as gentleness and refinement of culture were the mainstay of the party.

A turning point must clearly have been when and increasingly rotting Umno realised that it is only a matter of time before the non-Malays desert BN for the Malay-led party that offers them the Holy Grail of non-Malay politics: the replacement of discriminatory policies with a policy of equal opportunity and justice for all.

Evidence that is being processed will reveal just how violent Umno is willing to become to stem this tide of justice and retain their last vestiges of all-important incumbency.