Why the UMNO-Led Govt is Fearful of Dr.Kua's Book on "May 13"

"... it is hard to see how a multi-racial, multi-religious Malaysia can flourish if events such as May 13 can only be discussed in private, while the public is fed a distorted official version in order to sustain the legitimacy of UMNO politicians.

(Dr Kua's) book presents the view that 1969 race riots were instigated by ambitious Malay politicians. Now it seems the book will be banned by the government. "
-Philip Bowring

Thirty-eight years on, the traumatic ethnic riots of May 13, 1969 in Malaysia remain as much a subject of official censorship as the events of June 4, 1989 in China. 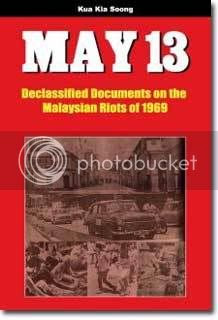 Now a new book by a Malaysian Chinese academic is on the point of being officially banned for suggesting that May 13 was the occasion for what amounted to a coup against the independence leader and Prime Minister Tunku Abdul Rahman by his United Malays National Organisation colleagues who were pushing pro-Malay policies.

Officials of Malaysia’s Internal Security Ministry Tuesday confiscated 10 copies of the book from a Kuala Lumpur bookstore, advising the store not to sell it as it may be banned. According to a letter issued by ministry officials, the book is suspected of being an “undesirable publication.”

What happened on May 13 remains highly relevant to UMNO’s position as the leader of the Barisan National, the alliance of race-based parties that has ruled the country since independence 50 years ago.

“Declassified Documents on the Malaysian riots of 1969” by Dr. Kua Kia Soong, the principal of New Era College, is based not directly on Malaysian sources but on now-open British documents held at the Public Records Office in Kew Gardens, near London.

These consist of contemporary British diplomatic and intelligence reports which suggest that the riots were not spontaneous acts of communal violence, as is constantly alleged by UMNO, but were fanned by Malay elements, with support from the army and police, wanting to discredit the accommodating prime minister and impose a much more rigorous Malay agenda. One British document concluded that the goal was to “formalize Malay dominance, sideline the Chinese and shelve Tunku.”

The official Malaysian government version of events was that the riots were sparked by opposition parties “infiltrated by communist insurgents” following huge opposition gains in the election.

Although the UMNO-led Alliance, the predecessor of the Barisan National, retained an overall majority, it lost its two thirds majority and its control of Selangor state was threatened. Certainly there was much celebrating among the mainly Chinese opposition parties at the election result, which angered Malay politicians who sensed their political dominance was under threat.

By the time the riots were over, official figures said 196 people had been killed, 6,000 made homeless and more than 700 buildings destroyed or damaged.

Non-Malays in particular have long believed that though there was violence on both sides, it was a mostly one-sided affair with some Malay politicians, notably Selangor Chief Minister Harun Idris, encouraging mobs to attack Chinese areas and that the security forces initially did little to prevent violence. This is largely confirmed by contemporary reports such as those of Far Eastern Economic Review correspondent Bob Reece.

Kua’s thesis suggests that there was a grander political design behind the episode, which from the beginning was intended to create a new political agenda and new leadership. He attributes this to a younger Malay group dissatisfied with the aristocratic, pro-British the Tunku.

In any event, the Tunku effectively stepped aside as emergency powers to rule by decree were (temporarily) placed in the hands of a National Operations Council headed by his deputy Tun Abdul Razak – father of current deputy prime minister Najib Abdul Razak.

The Tunku remained prime minister until September 1970 but had little authority any more. In 1971 he also stepped down as president of UMNO after virulent criticism by the Malay “Young Turks,” headed by Mahathir Mohamad, the future Prime Minister.

The same year the government enunciated the New Economic Policy and began aggressive affirmative action programs to advance the economic and educational level of Malays.

However, while the consequences of May 13 may be clear, there are disagreements about Kua’s thesis even among those who attribute the riots to Malay politicians. For example, Dr Syed Husin Ali also a respected academic and deputy head of the opposition Keadilan Party, has suggested that while some UMNO figures used the events as an opportunity to sideline the Tunku and set out a pro-Malay agenda, it was not planned as such.

In other words, Razak and others took advantage of the situation which arose after the election and the appearance of Malay mobs to grab the reins of power from the Tunku, with whom they were dissatisfied, but that it was not premeditated. Syed also takes issue with Kua’s view that they represented an aspirant Malay capitalist class when most had traditional and feudal links.

Bookstores have been advised not to sell Kua’s book and a formal ban looks likely on the grounds that it will stir up racial animosities, which it could well do in the short run.

However, from a broader perspective it is hard to see how a multi-racial, multi-religious Malaysia can flourish if events such as May 13 can only be discussed in private, while the public is fed a distorted official version in order to sustain the legitimacy of UMNO politicians.

I thought we are more mentally advanced than the many a war-torn nation that summarily execute journalists and truth-tellers? I thought this is the year 2007 and that we have declared to produce tens of thousands of those with PhDs ..We must banish unintelligent leaders who are still living with a May 13, 1969 frame of mind. From whom do these prohibitions and banning serve?

What's wrong with those who are thinking of possibly calling for the ban? Can't they read and analyze and write their own rebuttal of the historical account of May 13, 1969?. We were even afraid of our respectable social scientist Dr. Lim Teck Ghee's Asli findings on the New Economic Policy, written with such a refreshing and constructivist perspective.

We have installed a government of active ignorance, interested in the advancement of poor understanding of human development.

We need a new brand of leaders who will move this nation forward and create a new republic of virtue, morality, peace and justice for all races.