Is Nathaniel Tan being made the first victim in the high-stake power play between the Deputy Minister for Internal Security and the Inspector-General of Police ?

".... After 50 years of independent we became a very confused nation.

We have lost our mind and fail to recognise who is a gangster and who is a freedom fighter.

Should we take an innocent young man into custody for having a document that might prove someone big is guilty?

In THOSE days, the police were formed to protect the people from the bad guys.

Perhaps NOWADAYS, the police are form to protect bad politician from the masses that voted them into power and in order to do so, the bad politician will go sleeping on the police so-called friendship with the gangster.

Well, maybe this is the deal between the police force with Malaysia Prime Minister for sleeping on the IPCMC proposal.

IPCMC? How I am not surprised that it is all but forgotten.

Did anyone still remember how the police representatives politely told The Prime Minister that they will not have ‘power’ to ‘help’ the (BN) politician if IPCMC is implemented?

Remember that they ‘whisper’ that they will not vote for BN if PM carry on with the IPCMC?

"... I am concerned about the arrest and remand of Nathaniel Tan. Media reports suggest that he has been arrested in connection with an offence under section 8 of the Official Secrets Act, or the OSA.

If this is true, then the Government must take immediate steps to ensure that Nathaniel Tan is immediately released.

The OSA is unconstitutional. In its current form, it violates a range of fundamental liberties guaranteed by the Federal Constitution. The OSA violates the equal protection and equal access to the law guarantees as well as undermining the fair and free elections underpinnings of our system of government.

The OSA in its current form allows for a government to administer this country covertly and in defiance of the accountability and transparency that is crucial to democratic process.

This impacts on all our lives in more ways that we can begin to understand as the government is given a means to thwart legitimate public interest by the forced suppression of material and relevant information. The position taken by the government in connection with the disclosure of toll concession agreements illustrates this worrying trend.

The OSA as it is also violates international human rights norms and runs counter to representations made by our government at the international level about the state of play in this country where civil and political rights are concerned.

Malaysia is a current member of the United Nations Human Rights Council. It must act in a manner consistent with its membership.

These are not my views alone. The OSA has been widely condemned (see here for a comprehensive analysis of the Act by Human Rights Watch). 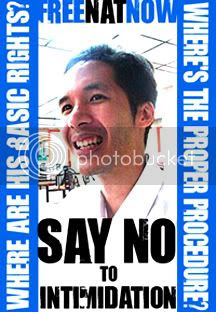 "...Who is Nat Tan? A lot of people have asked me this question. They want to know about who this guy whom the powers-that-be decided was enough of a threat to put him behind bars in orange shirts and shit. And possibly a kopiah.

Nat Tan went to Harvard, one of America's Top Universities. Best in their Law and Business schools. Then he came back to Malaysia and joined KeADILan. Why would someone smart enough and rich enough to go to Harvard would bother with a lame-o political party like PKR?

Funnily enough, around two months ago, I told Nat to get out of the country and take Li Tsin with him. "They will throw you in jail and cut your balls off, man," I wrote.

Malaysia is not a country for all this shit. Only a war which kills millions would ever have any impact on its people.I mean, if you want to change the country, it's really a battle to change people. To win over the hearts and minds of the kingmakers in the rural areas.

Folks like my parents and my villagers. I grew up with them and I can say that they are more fucked up than I am. They WILL cut your balls off, man. Or burn your parents' house. The Opposition likes to play hero in the urban areas, but they can never, ever penetrate the rural areas effectively with the bullshit politics they practice.

Honestly, I think Nat Tan is a better person than Anwar. When Anwar finally croaks, I was hoping that people like Nat or better yet, Nat himself would head PKR.

I've been following Nat Tan's hot sister's blog for updates on his detainment by people disguised as trees (Special Branch).

The charges are all still fuzzy. Especially after the powers-that-be quite possibly decided to sneak him through court past his lawyers and shit. Yeah. The thing was supposed to be at 4.30pm, but they tried to pull a fast one without telling any of Nat's lawyers that their client was there.

The charge apparently has something to do with this Dato' Johari fella, or rather accusations directed at Dato' Johari at this site. The guy who wrote that pasted information on his site in Nat's Jelas.info here.

OSA - Official Secrets Act - has been bandied about, suggesting that Nat has been exposing Government secrets to all and sundry. Even though he probably did not write the Dato' Johari site at all.

So what big secret is this all about? Most probably the secret is that Dato' Johari got millions of ringgit pay-off from Chinese gangsters to release them.

I mean, if that was not true, Dato' Johari would simply sue for libel and make a million from Nat's family as well as the anonymous whistleblower of the Freeweb site.

If it IS true and the facts could damage the country, THEN the powers that be would have grounds to arrest Nat under the OSA.

This, my friends, is how justice is carried out in Malaysia. And if you have a problem with that, you can GETTT OUTTT!!!

I'm trying to gather just RM300,000 cash so that I could go away to another country and leave the poor defenseless politicians alone. Cause if I stay here, in 10 years time, either they would shoot me or I would shoot them. AND their family.

And then, outside the country, I will use my genius to start a hydrogen fuel-cell revolution. And be the world's first trillionaire.

And THEN I'll get a Datuk Seri-ship which I will turn down in favour of a Lordship.

They'd ask me to come back to Malaysia but when I do set foot here, they will arrest me and try to take all my money, even though my company then would be a foreign one.

International pressure would mount because I have bought an English Premier League club, Seattle Supersonics as well as the Boston Red Sox. And they would have to free me. Not to mention McClaren-Mercedes and the Cleveland Browns.

Malaysia's economy would then be on a decline and a year later, I would have bought the entire country for a little under a billion USD.

And then I will come in with flying aircraft carriers and giant robots and set up a dictatorship in Malaysia which will last a thousand years.