Open Letter to DPM Najib on Islamic State: "Bring Forth YOUR Proof ? "

A Malaysiakini report entitled ‘This is an Islamic state : Najib’ reports that YOU made the following statements:

And like me, I am sure that YOU know full well that God commands the truth and nothing but the truth.

I am therefore first obliged to ask IF YOU DID INDEED make these claims?

If so, let me state categorically that YOUR claims are UNTRUE.

THIS IS THE TRUTH as I discern from the materials that abound.

YOUR late father, according to history, was part of the 1956 delegation that went to London to secure our independence.

Truly, this nation is indebted to YOUR late father, the late Tunku and every freedom fighter of the era for securing independence for our nation. And a SECULAR Federal Constitution.

Have YOU not read the Reid Commission report, that document that bears testimony to the selfless work of our leaders of days gone by?

Tun Salleh Abas (former Lord President of the Supreme Court) did, in extenso, in the case of Che Omar Che Soh. I have referred to this in an earlier post entitled ‘Historical and Constitutional Position of Islam Judicially Examined’

Let me reproduce for YOU here the relevant excerpt from Tun Salleh’s judgment.

"…we have to set aside our personal feelings because the law in this country is still what it is today, SECULAR law, where morality NOT accepted by the law is NOT enjoying the status of LAW.

Perhaps that argument should be addressed at other forums or at seminars and, perhaps, to politicians and Parliament.

Until the law and the system is changed, we have NO choice but to proceed as we are doing TODAY. "

Do YOU know what Tunku’s view was on this secular / Islamic state issue?

See what Tunku said on the occasion of his 80th birthday as reported by the Star in February, 1983. 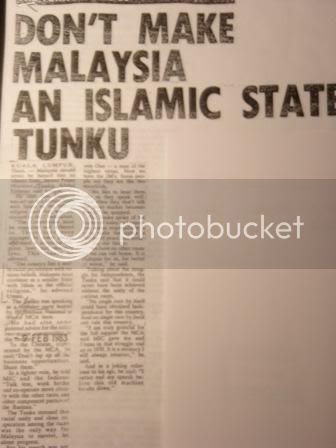 " The country has a multi-racial population with various beliefs.

Malaysia MUST continue as a secular State with Islam as the official religion ".

Tunku was NOT alone. This how the report in the Star reads :

"Former Prime Minister Tun Hussein Onn has supported Tunku Abdul Rahman’s view that Malaysia should NOT be turned into an Islamic state… 'The nation can still be functional as a SECULAR state with Islam as the offical religion,' he said."

What were YOU thinking of when YOU made what appear to me to be unfounded claims?

Aside from being untrue, they also amount to a slur on Tunku and Tun Hussein.

These two great statesmen got it wrong?

As one who, like you, professes a belief in Islam, I must ask that you DESIST in these UNFOUNDED contentions.

As you also well know, God in the Holy Qur’an commands that when there is a dispute on an issue, it is proper to call in the evidence of the respective parties.

I have produced my proof.

Please note that I have refrained from invoking the last part of the verse above.

At this juncture, I shall assume you were merely mistaken.

I am obliged to say here that IF YOU insist on continuing to make these assertions without bringing forth your proof, I shall invoke the curse of God as commanded in Surah 3 verse 61 of the Holy Qur’an.