"..Malaysia’s RELIGIOUS AUTHORITIES have proven to be a MENACE to themselves, and some would argue, the country as well .

At a time when religious issues have become ultra-sensitive in Malaysia, cases such as Revathi’s points to the growing intransigence and belligerence of the country’s RELIGIOUS AUTHORITIES, who increasingly behave like a law unto themselves.
-Farish A. Noor 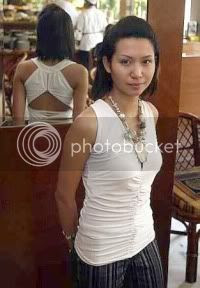 The Charge: For "Revealing her body"
and "Promoting vice" under the Perak Syariah Penal Code.
(Read HERE for more and HERE)

Over the past few years the country’s religious authorities in particular have been at the forefront of the effort to show Malaysia and Islam in the WORST light imaginable:

Then came the spate of other raids of peoples’ homes, including a rather embarrassing raid on the flat of an elderly American couple who were woken up in the middle of the night on the grounds that they were suspected of having Malaysian Muslims in their flat and presumably up to no good.

The fact that the raid took place on the resort island of Langkawi further dampened Malaysia’s efforts to promote the country as a holiday paradise and second home for retiring couples from abroad.

Needless to say, NONE of this bodes well for Malaysia, Islam or the image of Muslims in the country.

At a time when religious issues have become ultra-sensitive in Malaysia, cases such as Revathi’s points to the growing intransigence and belligerence of the country’s religious authorities who increasingly behave like a law unto themselves.

Furthermore one wonders how many more cases exist out there, of people like Revathi or Lina Joy who have been forced into a life of secrecy and hiding for fear of the wrath of the morality police and shariah enforcers.

Of course, all of this is taking place against the backdrop of a Malaysia that is about to celebrate its 50th anniversary and which is currently celebrating ‘Visit Malaysia Year 2007’.

Tourists who come to the country will undoubtedly be bedazzled by the pastiche of post-modern consumerism run amok in the capital, where shopping and capitalism seem to be the real credo of the land.

The Malaysian government under Prime Minister Abdullah Badawi prides itself with the claim of being a moderate Muslim state where a ‘civilised Islam’ is being promoted under the vague banner of ‘Islam Hadari’.

But WHERE , pray tell, is the ‘civilised’ aspect of religious moral policing that locks people in cages, verbally abuses female Muslims accused of indecent dressing, breaks into the homes of citizens in the dead of night?

Underneath the glitz and glamour of Malaysia’s polished façade, the unfettered religious bureaucracy of the country points to a growing tide of Malay-Muslim communitarianism that is increasingly intolerant and demanding a greater slice of public space.

Some Malaysians living in multiracial neighbourhoods have even been told that they cannot keep dogs as pets, for fear of upsetting their Muslim neighbours.

The victims of this politicised religious politics, like Revathi, are left to fend for themselves with only the help of the country’s small NGO community and the international media to highlight their cases.

Yet the verdict is clear: After being detained for six months, Revathi confesses that she ‘HATES Islam even more now’. Hardly surprising when one considers what she has been put through in the name of ‘saving her soul’.

The question is, what is the current government of Malaysia going to do about the current state of affairs?

Malaysia’s religious authorities have proven to be a menace to themselves, and some would argue the country as well .