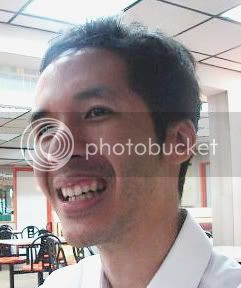 The Kuala Lumpur magistrate court today ordered that Nathaniel Tan be remanded for 4 days under Section 8 of the Official Secret Act (OSA) over allegation of possession of documents pertaining to Johari Baharum's alleged involvement in corruption.
Read here for more on Screenshots

To:
President of the Foundation for the Future
July 13, 2007
Kuala Lumpur, Malaysia

Today, Nathaniel Tan, who is my secretary as Chairman of the Foundation for the Future, was detained by three plain-clothes individuals. The officers did not identify themselves or their designation but merely mentioned that they were part of the Special Branch and requested Nathaniel to follow them and bring along his laptop.

I strongly condemn the detention of Nathaniel by the Malaysian police. Nathaniel, 27, a graduate of Harvard and resident of Kuala Lumpur, has been actively involved in humanitarian and volunteer efforts in Aceh, Indonesia and Sierra Leone as well as with human rights groups in Malaysia.

I want the Inspector General of Police, Tan Sri Musa Hassan to take this matter to his immediate attention and confirm where and on what grounds is Nathaniel being detained. I request that his lawyers and family members obtain immediate access to Nathaniel to ensure his well-being and safety.

Read here updates by Tan's sister on her blog.

Read here UPDATES on the detention of Nathaniel Tan

At 4.45pm (13th July, 2007) three plainclothes police officers came to Yayasan Aman ( an NGO) in Petaling Jaya and took away Nathaniel Tan, saying he should follow them to Bukit Aman Police Hq. No reason was given by the three policemen. Tan was asked to bring along his notebook computer.

Nathaniel Tan, 26, is the staff of PKR (Parti Keadilan Rakyat) Information Bureau and who helps maintain the opposition pary's website.He is also a prominent Malaysian Blogger.

Tan also works in the Foundation for the Future as the Secretary to PKR de facto leader Anwar Ibrahim, who chairs the foundation. He is a graduate from Harvard University.

It is believed that he is being questioned on matters relating to certain postings on the Internet.

There was no news given by Bukit Aman Police about the whereabouts of Tan and whether he was indeed detained by the police.

It was only at 10 pm, some 6 hours later, that the police confirmed Tan was held in Bukit Aman Police Hq.

According to the police, Tan will be held for 24 hours by Bukit Aman's Cyber Crime Unit to facilitate investigation under the Official Secrets Act (OSA).

Tan is expected to be brought before a magistrate for further remand at 4.30pm tomorrow.

It is not known exactly what OSA offence Tan is being investigated for. The police have also earlier gone to Tan's house to seize his desktop computer.

Anyone found guilty of committing an offence under the Act is punished with a mandatory jail sentence of at least one year.

"... What we are working for is a better Malaysia, a CHANGED Malaysia.

A Malaysia where the schools are not nothing more than propaganda outlets.

A Malaysia where the economy is not propped up by a government dependent on oil, and entrepreneurs are stifled by corruption and an interventionist state.

A Malaysia where every Malaysian citizen, regardless of their class, race, or religion, knows they have the same opportunity as anyone else to head a world-class Malaysian corporation, or to be Prime Minister.

That is the goal we work towards. And if these are the objectives you share, then for Nat's (Nathaniel Tan) sake, please join the cause in some way.

Don't vote for the corrupt regime heading this country.

Assert your rights AS A CITIZEN

Do more than just talk, and TAKE ACTION in some way.

Even if it is only at the ballot box, word is that an election may be around the corner.

Please, make your vote count — make it so that the Malaysia of tomorrow is a Malaysia where we do not live in fear of the secret police knocking on the door, where every Malaysian has the same opportunities to be the best they can be, where Malaysia is truly a free and democratic society, instead of the horrid sham it is now."