From Malaysiakini: Read here for more

"We as Umno Youth and citizens of Malaysia are HURT by Chua’s actions”
-Khairy Jamaluddin, Deputy Chief, UMNO YOUTH

Let's get this straight: HURT? UMNO YOUTH?
A very long shot. Almost impossible for anyone in this country to believe, for an organisation that itself practises variations of verbal and street gangsterism in dealing with others, especially members from other political parties !

UMNO Youth does NOT have ANY high moral ground at all on THIS issue.

“We as Umno Youth and citizens of Malaysia are hurt by Chua’s actions,” said Khairy, who was accompanied by Tangga Batu MP Idris Harun and Putera Umno chief Abdul Azeez Abd Rahim.

“It (the picture) was fake and unsubstantiated. (And) Chua has admitted this himself. We take it as something that was done in bad faith.”

Khairy refused to be drawn into commenting on a digital composition posted on the Umno Youth website in 2005 which had offended the DAP. Read HERE for more, and HERE and HERE 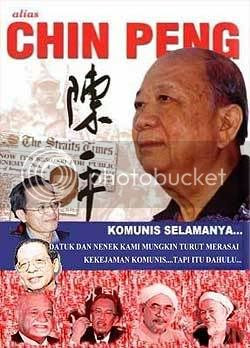 The Above Picture Posted on UMNO Youth's Official Website,
on September 9, 2005 (courtesy of Malaysiakini)
The picture on the UMNO Youth website contained the superimposed faces of opposition leaders on the cover of the book, Alias Chin Peng: My Side of History - the autobiography of the former Communist Party of Malaya (CPM) secretary-general, who now lives in exile in Thailand.

Khairy said, “This has nothing to do with our report today. (They) did not lodge a report."
Posted by Malaysian Unplug at 18:06:00