".... The question now is , how is PM Abdullah Badawi going to position himself in determining who is the wrongdoer, Johari Baharom or Musa Hassan?

This is not about the reputation of Musa Hassan (as IGP ) or Johari Baharom as (Deputy Ministry for Internal Security ).

This is about the reputation of Abdullah Badawi and the BN government.

This is a crisis. Musa Hassan or Johari Baharom should be sacked or resign. "
- Datuk Paduka Haji Husam Bin Haji Musa 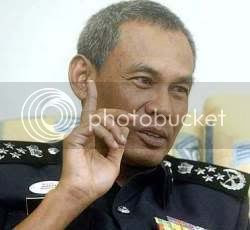 As the days go by, the credibility of PM Abdullah Ahmad Badawi decreases.

An investigation was carried out on the Deputy Minister for Internal Security Johari Baharom who was accused of receiving RM5 million corruption for releasing 3 triad leaders. (Read HERE and Here for more)

But there is NO directive from PM Abdullah Badawi to investigate the corruption case of Musa Hassan, the IGP, when it was reported in the internet.

(Malaysiakini reported that Johari Bahrom filed a report with the ACA against the IGP Musa Hassan, almost immediately after the Attorney General Abdul Gani closed the investigation against Johari Bahrom and cleared him of graft charges. Johari Baharom said he made the ACA report against the IGP Musa Hassan after failing to receive an explanation about the Internet reports from police. Reports were circulating on the Internet alleging Musa Hassan received a bribe of RM2.1 million to release a group of gangsters, according to Bernama. - Malaysian Unplug)

To make it worst, Abdullah has renewed the IGP's contract with the justification for combating crime.

This is similar to the case of the renewals of the ACA Chief's contract by PM Abdullah Badawi even after having received 3 corruption reports from senior ACA officers.

(Former ACA Chief,Zulkipli Mat Noor contract was not renewed after he was investigated by the national police over allegations that he had illegally amassed substantial property and assets, and misused government vehicles. Read here for more

When PM Abdullah Badawi was asked about the 600 pages report on the corruption of a Minister, Abdullah shamelessly said that he has not read the report.

The question now, how is PM Abdullah Badawi going to position himself in determining who is the wrongdoer, Johari Baharom and/or Musa Hassan ?

The ACA report which Johari Baharom had initiated on IGP Musa Hassan, is considered an official act.

The question is: Has Johari Bahrom obtained permission from PM Abdullah Badawi, who is also the Interal Security Minister, before issuing the ACA Report, given the fact that IGP's contract has just being renewed recently?

It would appear that Johari Baharom 's action showed that he does not respect the PM Abdullah Badawi's decision in renewing Musa Hassan's contract as IGP.

If this is so, will Abdullah sack his Deputy Minister for Internal Security?

This is a crisis. Musa Hassan or Johari Baharom should be sacked or ask to resign.
-Datuk Paduka Haji Husam Bin Haji Musa