Being Anak Bangsa Malaysia and a True and Honest Muslim

Excerpts: Read here for more on The Star Online

Teoh Kean Hong is a chef in London working in a Chinese restaurant. He had saved RM10,350 – money to support his wife and three children back home in Subang Jaya.

Last Tuesday, he returned home for a short holiday. He stuffed the £1,500 in an envelope and placed it in a pocket of his jacket. He did not know that the enveloped had dropped from his jacket before getting into a car at the KL International Airport to return home at about 8pm.

Teoh only realised the money was missing at 10pm while having dinner with his family. He rushed back to the airport hoping to find his money. It was not there and he reported the loss to the police.

On Sunday, while in Cameron Highlands, Teoh’s father called. Somebody had found the money and it was reported in The Star.

“I was so relieved. I am grateful there are still such honest people around,” said Teoh. 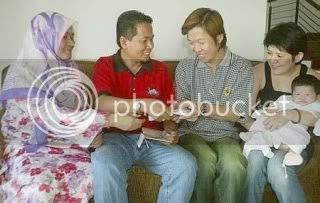 Teoh expressing his gratitude to Capt Zaim and Asma.
With them are Teoh’s wife Ivy Lee and their child Kai Xuan.
(Photo courtesy of the Star On-line)
Asma, a lecturer at Technical Teachers' Training Institute, had stumbled upon the cash while loading her luggage into her husband’s car.

Asma, 42, and her husband, pilot Capt Zaim Khalid, decided the money must be returned to its rightful owner.

She sought The Star’s help to trace the owner.

Over some home-made cookies at Asma’s house in Bukit Jelutong here, Teoh thanked the couple profusely for handing the money back to him.

He insisted they accept an ang pow (red packet) as a token of his appreciation.

“Keeping the money was never an option. As a lecturer, my wife always tells her students the importance of honesty

As Muslims, we teach our five children never to keep what does not belong to us. In this case, the money is Teoh’s sweat and blood.”

A lecturer has found an envelope full of money at the KL International Airport and she wants to return the cash to the owner.

Asmah Muda, 42, found the envelope under her husband’s car when she was loading her luggage into the boot on Tuesday evening.

She had just returned from a seminar in Kota Baru.

"I picked up the envelope and entered the car. There was money inside. My husband and I were shocked. We decided to wait around the arrival area for about 10 minutes, just in case the person who lost the money came looking.

“But we could not see anyone searching for the envelope. We eventually went home.”