Articles in the International Media

"... All the years as UMNO man loyal to Tun Dr Mahathir, I have never been to any demostration or street protest.

Finally today, my eyes felt the pain, my mouth sore and my skin was burning. Few times I had to lean down and few times some of the protester help me to get back on my foot. Few times I lost my direction and confuse, and few times, the Police Officer and Personnel help me regain my composure.

As a Malaysian, I believe the only thing that was broken today was my camera lens. Kaput!.

But who cares. Daulat Tuanku! ..."
- Shieh of "Kickdefella" Blog

".... BERSIH and their massive mass rally was a great success! Alhamdulillah! All Praise to Allah swt!

I have to say here folks that I am feeling really great at the moment even though I am still suffering from the sting of those tear gases. I feel like all of my frustrations and disappointment (loads of them!) had been lifted off my shoulders!

Well done everyone! You have done the nation proud! A true ‘Malaysia Boleh’ achievement!
- Saidul. A. Shaari of "Malay Women of Malaysia" Blog

".. ..I can tell you, the marchers around Masjid Jamek deserved many pats on their back for the way they behaved and carried themselves throughout the ordeal facing the policemen with red hats.

It was the people at Masjid Jamek who had the honour to be showered with the first chemical rain today at the historic march to Istana Negara. The crowd, which were initially in front of the Masjid Jamek LRT station was forced to split and ran for their lives when suddenly the red truck marched from the main junction near Dataran Merdeka towards the crowds. .

Although I was not directly hit by the chemically-laced water from the water cannon, the fumes were irritating enough to make my eyes teary and my breath suffocated. The crowds were just tortured.

I had to thank a ‘makcik’ who had come to the gatherig well prepared, when she took out a pack of salts and distributing it to others. When I asked her what was that for, she quickly said it was to help reduce the effect of the acid rain, courtesy of the red trucks. I overheard one guy made a joke that he was suffering from a high blood pressure and yet today he had consumed so much salts…. followed by laughters from his friends who were also nursing their teary eyes and breathing difficulty.
- CJCM of "Kuala Lumpur is Home" Blog 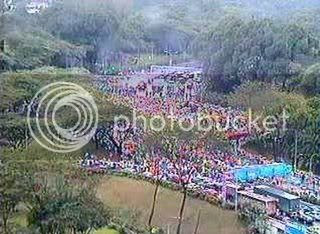 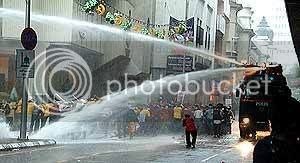 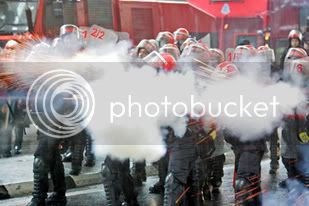 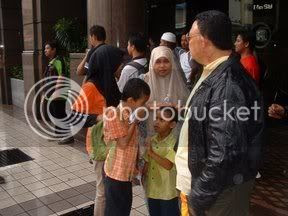 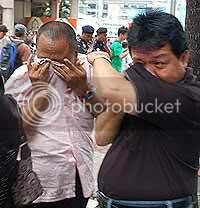 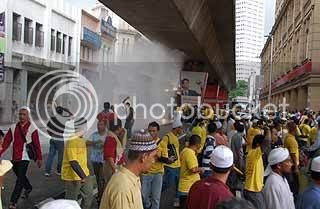 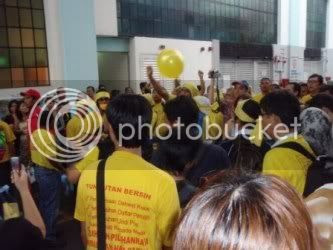 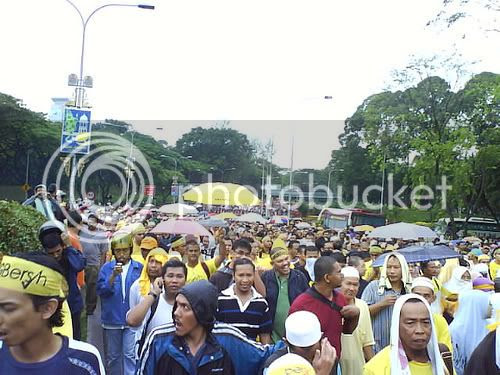 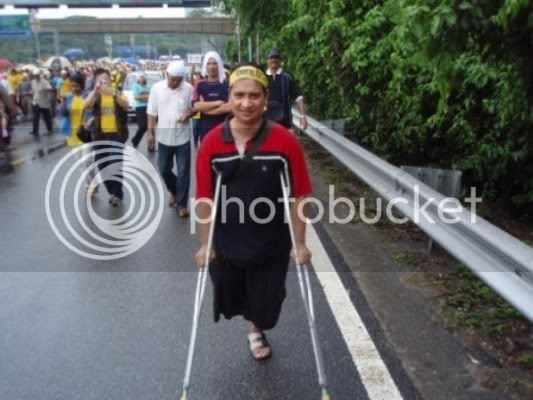 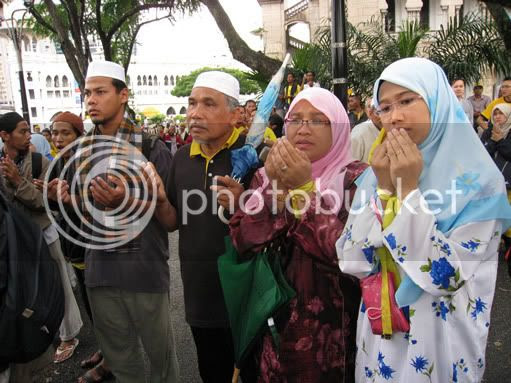 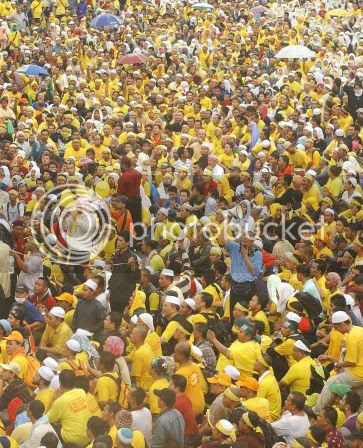 At 4 pm, the Bersih delegation led by Anwar Ibrahim handed the memorandum to the King's representative at the gate of the Istana Negara.

(Read here the text of the Memorandum submitted to the King)

Malaysian police have fired tear gas shells and water cannons to disperse hundreds of activists at an opposition-backed rally in the capital Kuala Lumpur.

Al Jazeera's Hamish McDonald reporting from Kuala Lumpur said the police sprayed CHEMICALS on the protesters in order to disperse them.

Many activists barricaded themselves in a nearby mosque for protection.

Thousands of demonstrators in the city centre were stopped by a police cordon as they tried to march to the Merdeka [Independence] Square, the planned location of the rally.

Roadblocks and barricades were placed around the city on Saturday. A permit for the rally was refused by police.

"We will not hesitate to take action against those who defied our orders," Zul Hasnan Najib, Kuala Lumpur's police chief, said.

Abdullah Ahmad Badawi, the prime minister, said on Friday that the GOVERNMENT would NOT tolerate street demonstrations.

Activists then made their way to the king's palace to deliver a list of demands, which was handed to a representative of the country's head of state.

The rally on Saturday was organised by activists demanding changes to the electoral system ahead of general elections expected early next year.

"It is a good sign that Malaysians want freedom and democracy and want free and fair elections," Ibrahim said.

The rally has been organised by Bersih (Clean), a loose coalition of 26 opposition parties and non-governmental organisations.

The crowd consisting of thousands near the Masjid Jamek LRT station were among the hardest hit in the mass rally calling for free and fair elections today in Kuala Lumpur.

Without warning, torrents of chemical-laced water from an FRU water cannon were fired at the crowd forcing everyone to run for cover.

Most of them retreated inside Masjid India and a nearby commercial building which housed a bank and two LRT stations nearby.

Minutes later, the water cannon simultaneously fired in the direction of Masjid India and a crowd gathered at the entrance of the bank.

Braving the chemical-laced water, the crowd managed to get within 50 metres from Dataran Merdeka, forcing the water cannon to pull back.

A tense stand-off between the crowd which had by now swollen to more than 2,000 and FRU personnel ensued with the crowd continuously chanting loudly “God is great!”.

At about 2.39pm, the police fired several canisters of tear gas at the crowd who again retreated into the mosque and surrounding buildings.

The warnings were not heeded but the crowd did not become unruly. They were seen obediently taking orders from marshals comprising of PAS volunteers.

At about 2.45pm, about a dozen tear-gas cannisters were fired in Jalan Tun Perak, dispersing most of the crowd from the area.

Syed Husin Ali, the opposition PKR deputy president, said he was caught up in the chaos outside the Masjid Jamek.

"I was hit two times by tear gas and water cannons. The police were clearly trying to stop the crowd and it was very difficult for us to carry on with the march, but we did," he told AFP.

Many bystanders commuting between the Star and Putra LRT stations were caught in the volleys of tear gas and chemical-laced water.

Nearly every business premises in the area closed their doors during the incident today.

"I think they put up unnecessary road blocks to prevent people from attending the rally," he told AFP.

"It was a violation of human rights to use water cannons and tear gas to disperse people from exercising very fundamental rights of peaceful assembly."

From ALIRAN: Read Here for more

"....Well, it looks that the information Minister will have to eat his own words.

In his arrogance, the Minister of Information sneered, "Do you believe thousands of people will be coming for the rally? Don't be so silly as to be taken in by them," he said, adding that even the Umno annual meeting could not gather such a number of people.

Well Zam, what have you to say now?

These are ordinary people who don't need to be enticed with pocket money, transport and nasi bongkus.

He will have to believe what he sees. His eyes are not playing tricks. It is indeed true that concerned Malaysians did turn up in their thousands to demand clean and fair elections.

They were not intimidated by the heavy presence of the police and the FRU; they were not discouraged by the water cannons or the riot police with their shields and batons.

These are brave Malaysians who have had enough of the arrogance of the powers-that-be. They are here to demonstrate to the democratic world that there are Malaysians who are prepared to stand up and march for justice.

Nazri had haughtily dismissed the crowd of 2,000-odd lawyers who also had marched in an attempt to stop the rot in the judiciary as being in the minority.

Well, Nazri if you had dared to persuade the police to allow the proposed march to proceed unhindered, then you would have witnessed a crowd that would have been bigger than the Kesas Highway gathering.

It is because the Barisan government does not want the people of Malaysia to witness how upset and unhappy many Malaysians are - that is the sole reason that they had brought in their mighty strength represented by the police and the FRU with the sole purpose of disrupting the gathering.

In this way they had hoped that Malaysians would not get to witness the truth that exposed their lies and distortions.

What took place today was a peaceful, democratic and legitimate exercise undertaken by concerned Malaysians to seek a remedy for our tainted, lopsided elections.

Whatever may be said in defence of the Election Commission or the manner in which elections take place in our country, the truth is that there has NEVER been equal opportunity to fight clean and fair in the general elections.

It has been always tilted in favour of the Barisan Nasional, which abuses state facilities and state coffers to entice the electorate - and that must be seen by any impartial observer as clearly constituting corruption.