The "Village Idiot" Is At It Again - in Parliament

Read here for more in Malaysiakini

"A Village Idiot is a person widely known in the community for his/her stupidity and ignorant behaviour.

Underlying the term is the supposition that each small country village must have one exceptionally simple resident who serves as the butt of jokes and provides endless amusement for the townsfolk.

The legend of the lone "Village Idiot" is unfair and inaccurate. Many villages have two or three, and sometimes we even elect them to public office."
Read here for more 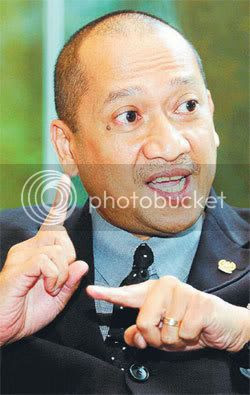 In Parliament, the Minister in the Prime Minister’s Department Mohd Nazri Abdul Aziz (BN-Padang Renggas) called the Opposition, among others, “pondan” (wimps).

Nazri said it would be pointless to try and understand the reason behind the rally as the “brains of Opposition members do not function well.”

Nazri said the government has no intention to drawing up a law to allow citizens to be automatically registered as voters upon reaching 21 years of age.

"... If I were to describe this in the language of today’s youths, I would have to say that the wires in their heads are severed. I don’t understand why they claim that the EC is unfair.

Yang Di Pertua (Speaker), this is a man (MP Lim Kit Siang ) whose 'wires in the head have severed’. We support the demonstrations in Myanmar (Burma) as there's no democracy there.

But we have democracy HERE , which is through the elections, not through street demonstrations.

Don't try to drag the King into this. The King and the people are behind us. They (the opposition) are afraid to face the next elections.

If you've no courage, don't become a 'pondan'.

Many Malaysians who shift to another state or district do not inform the National Registration Department of their new address.

The minister then dismissed the episode as a “pondan matter” which required no further attention.

Is this Minister, the "Village Idiot" 's Twin ?

Below is a transcript of the telephone interview that Malaysia's Minister of Information Zainuddin Maidin (ZAM) gave to the Doha-based TV Network Al-Jazeera (AJ), moments after the BERSIH memo was delivered to Royal Palace at the close of the biggest anti-government protest in Malaysia in ten years. (reproduced from www.idlethink.com/bersih )

Click here to watch the video clip of the interview

The transcript below of the interview (as close as it can be transcribed from the ramblings of the Information Minister):

AJ: As you say that, sir, we're watching scenes of protesters being sprayed by chemical-filled water ...

AJ: Our correspondent came back to the office, sir, with chemicals in his eyes!

ZAM (speaking over her): ... You, you, you, you are here with the idea, you are trying to project, what is your mind, you think that we are Pakistan, we are Burma, we are Myanmar, everything you, you are thinking ...

AJ: Well unfortunately when you refuse to let people protest, it does appear so.

AJ: So why can't people protest then, if it's a democratic country?

ZAM (interjects at "protest then"): Ya, people protest, people then -- first they protest, we are allowing protests, and they have demonstrated. But we just trying to disperse them and then later they, you know, disperse, but later our police compromise. They have compromised and allowed them to proceed to Negara. Police, our police have succeeded in handling them gently, right? Why do you report that and you take the opposition, someone from opposition party you ask him to speak, you don't take from the government, right?

AJ: Why did you not break up these protesters --

AJ: Why did you not break up these protests more peacefully?

AJ: Why did you not break up these protests more peacefully?

ZAM: No we, we are, we, this protest is illegal. We don't want, this, the, normally ... (slight pause, then continues to talk while she interjects)

AJ (interjecting): OK, so let me return to my former question. Why is this protest illegal?

ZAM (babbling on): Ya it's illegal protest because (AJ: Why?) we have the election in Malaysia. It's no, no point on having the protest, we are allowing to have every, an election every five years, never fail. We not our like, are not like Myanmar, not like other country. And, and you are helping this. You Al-Jazeera also is helping this, this forces, the, you know, these forces who are not [?], who don't believe in [?] ...

AJ (seems to want to say something, but decides not to): I don't ... many thanks for joining us.

ZAM: I don't, ya, you, Jazeera, this is, is Al-Jazeera attitude. Right?

(she doesn't reply. In the background, the chants of the protesters fill the silence)

It was the case of MISSING Barisan Nasional members of parliament to ask questions, absent government officials to answer them and officials attempting to answer questions not pertaining to their ministries.

To make things worse, the absent officials from ministries caused some other questions to be left unanswered.

Two questions were posed to the Defence Ministry, (instead) answers were attempted by Finance Ministry parliamentary secretary Hilmi Yahaya and Natural Resources and Environment parliamentary secretary Sazmi Miah respectively. Naturally they were ill-equipped to answer the questions, with both requesting for a written reply to be given as they did not have additional information on the supplementary questions posed for the queries.

And to add the frustration, there were ministry officials who were present but did NOT have proper answers.

Finance Ministry parliamentary secretary Hilmi Yahaya Hilmi Yahaya was winding up the debate on the Supply Bill 2008 and the Development Expenditures Estimates 2008. Fong Po Kuan (DAP-Batu Gajah) demanded to know the reason for the absence of Finance Minister Abdullah Badawi, who is also the Prime Minister , in the Dewan to listen to the debates when the bills were tabled by his Finance Ministry.

Dewan Rakyat speaker Ramli Ngah Talib advised all BN MPs as well ministry officials to be present in Parliament, whether or not they have the replies for their questions.

reported by Ioannis Gatsiounis, a New York native, is a Kuala Lumpur-based writer.

".... An incident witnessed by this correspondent at about 4pm on Tun Perak Road on Saturday was a window into the ILL-HEALTH of Malaysian democracy. As riot police stood watch behind shields, ralliers began to move parallel to them down the sidewalk. Those in the front urged the others to pull forward, but there was a pronounced apprehension about the crowd - a stutter in the step, as if the notion of free expression was only vaguely familiar.

Some twirled Malaysian flags. Others waved to police in a gesture of goodwill.

Then suddenly police blitzed from the side, sending protesters scurrying.

Some of those caught were dragged to the ground and kicked and punched by several officers before being hauled away.

Minutes later, police rushed the shop-lined alleys behind the Jamek Mosque area, barking and banging their clubs against drawn shop fronts, as shopkeepers and customers sought cover behind lattice doors.

Plainclothesmen demanded those with cameras to shut them off or risk arrest.

Fitri Shukri, 31, a consultant who traveled from the northern state of Penang to attend the rally, said overall he was encouraged by the day: "This is a start. We know it takes time. But sitting at home won't help and Malaysians are beginning to realize it." Read here for more