"Why are YOU going backwards?

What was it I was told when I was a kid --- if you have nothing clever to say, do shut up, darling."

I suppose mediocre leaders often try to make up their lack of intellect with a lot of loud noise. Shameful.
- Nuraina A. Samad 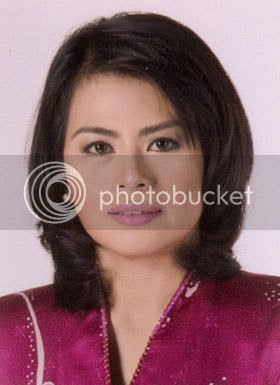 Article reported in The Sun:
"... In her policy speech at the Puteri Umno assembly yesterday (Nov 6), Puteri UMNO Chief, Noraini Ahmad said the wing would not accept Negarakuku composer Namewee apology as he had gone overboard.

She also said the wing was shocked by a youth who burned the national flag in Kuala Tterengganu on Sept 8.

On the brain drain experienced by Malaysia, Noraini said if students fail to come back and serve the country once they completed their studies, they should be penalised with higher interest on her loans.

"To avoid brain drain, local universities must be strengthened to be on par with international standards."

Noraini also commented on the abuse of information and communication technology by bloggers who insulted the King and Islam.

She said the Sedition Act, Internal Security Act, Officials Secrets Act and Printing Presses and Publications Act must be enforced to the fullest as irresponsible acts by bloggers caused tension among people of different races and religions.

She said as the majority race, the bumiputra's effort to defend their fate is a national mission and should not be seen as racist or an effort to benefit just one race...."

"... I can hardly believe I am reading all this.

Here is the head of a political body of young people - young vibrant dynamic minds -- making a policy speech.

The content smacks of mediocrity and the tone is unnecessarily harsh.

I suppose mediocre leaders often try to make up their lack of intellect with a lot of loud noise.

Ok. So she has the right to her opinion about what should be done to Namewee, to parents whose missing kids are brutalised and/or killed and to bloggers who insult the King and Islam.

I am aware that she was probably speaking to the gallery. Bad mistake. Because the gallery goes beyond the halls and walls of the PWTC.

Here, I would like to touch on her call to invoke the ISA and the Sedition Act against bloggers who "cause tension among people of different races and religion".

The ISA is something YOU do NOT want to invoke, or use on any Malaysian unless he or she is a THREAT to the SECURITY of the country.

Unless you have proof that anyone, including bloggers, is/are a threat to the security of this beloved country of ours, YOU SHOULD BE CAREFUL about any suggestion to invoke the ISA against anyone.

If I could, I'd make it unlawful for politicians and political leaders (or anyone) to threaten the citizens of this country with the Internal Security Act.

In fact, if I could, I'd sue any politician or political leader who liberally threatens to invoke the ISA on the citizenry.

Ok. What I'm saying is -- don't mess with the ISA. It's not a convenient weapon of fear to be used against any Malaysian.

Why are YOU going backwards?

What was it I was told when I was a kid --- if you have nothing clever to say, do shut up, darling.

But, I was not and never a politician.

At a time when young women are more than 60% of university students and are facing all sorts of challenges, what they need most are good leaders and examples. That means women who care about them and who inspire them with their intelligence and ideas.

Noraini unfortunately is NOT it.

Which disappoints me greatly because I have met her before and she seemed like a bright enough spark.

One thing I do know about leadership is that you can't come to the table with absolutely no ideas yourself. You have to have the ideas, you must be able to articulate and persuade people why you think they are good ideas and you must be open to criticism on them and work out some solution to those.

You cannot simply repeat what has been said before and even then with the shallowest of introspection of whether those ideas are worth anything or not.

I happen to believe that the future of this country belongs to young women and will be driven by young women.

When a little girl is killed, what does Puteri do but blame the parents? How simplistic is that, not to mention insensitive?

When many women are bloggers, why does Puteri call on the government to come down hard on blogging as in this report

Oh my, my! I'm surprised she didn't mention bloggers causing tension between the sexes (with her flag firmly planted on the male side of the fence!).

And how's this for a simpleton's analysis? "To avoid brain drain, local universities must be strengthened to be on par with international standards."

My dear, firstly, the brain drain is not caused by people not coming back. It's caused by people leaving. There is a subtle difference. You have to look at what's making them leave, not just not wanting to come back. And how do you even collect repayment of loans with higher interest (eh, isn't that unIslamic?) from people who aren't here?

Secondly, yes I do agree that local universities need to be strengthened and be on par with international standards. But that's not going to be enough to stop people leaving. We need academic freedom, we need a university environment that supports and celebrates diversity, we need holistic university experiences that encourages students to participate in many activities and sports and one that that does not segregate by race.

What is the point of having students who graduate with the inability to adapt themselves in a society that is socially diverse and competitive?

One way to make sure there is no 'brain drain' is of course to make sure that nobody speaks English well. Then there is absolutely no hope of them leaving the country for greener pastures.

Hey, how's that for a Puteri-worthy solution?

Read the blogs by young women, Noraini. There you will find a whole slew of different opinions and ideas, not just the type that your pink ladies will eagerly tell you.

They are sharp and smart and they DON'T need the approval of men to affirm them...."

"...This young woman is so detached from the real world, from the people, from history. A classique half-past-six.

She got to where she is without having to sweat or fight. She got her datukship for being silly, without contributing anything to the nation.

Why? Because that's how it is with the Puteris, and Noraini is the chief blond.."

"... People like Noraini has no right to be where they are.

Very half-past six and this does not speak well for Puteri Umno.

Her points are so poor. Reflects her thinking. and is that what Puteri Umno thinks?

Makes me wonder...all young Malay women are like Noraini?..."

"... In all my years, I have met hundreds of pretty girls and I have never been drawn by their looks alone. I wait for them to start talking.

That's when I am able to see her charm, finesse, intellect and intelligence. I am always attracted by any women who writes or talks intelligently.

I would place Noraini on level with those girls from the kampongs/rubber estates with Standard Six education.

She has no class nor finesse.She is to be listened and ignored.

Her leading the Puteri is synonymous to an Indonesian maid whose social status is elevated by marrying a millionaire...."

The saddest part is most of them are the leaders, so-called leaders, who as you rightly pointed out do not have their feet on the ground.

Noraini comes across as someone who tries very hard "mononjolkan diri" and lacks compassion.

She's supposed to be leading the young puteris, yet her thinking is so 'backwards' and "kolot".

Makes your "blood goes upstairs" to think this is the kind of leaders who are going to lead our children into the future.

So Dato' Najib, how to create an "angkasa tamaddun bangsa"? I think she is the first who should be sent out to space...."