Pak Lah, Sack Them from the Cabinet: They are a Disgrace to Malaysian Pride and Prestige

A Lesson in History for Our Leaders... Lest They Forget!

Prime Minister Abdullah Ahmad Badawi said the demonstration was NOT the way to bring change. “This is not our way; this is not the way of Malaysia. Ours is democracy and this (the gathering) is NOT acceptable." (Read here for more in The Sun)

This was echoed in the silly ramblings of the Information Minister Zainuddin Maidin (click here on video clip) during the interview with Aljazeera TV, when he said, "Ya, it's illegal protest because we have the election in Malaysia. It's no, no point on having the protest, we are allowing to have every, an election every five years, never fail. "

Our 'Village Idiot' had this to say in Parliament, "But we have democracy here, which is through the elections, NOT through street demonstrations.

To refute these stupid remarks by the Prime Minister and his UMNO Ministers, blogger Maria A. Samad and Blogger Fahmi Reza have posted articles on how (then Malayans, especially the Malays), took the battle-cry to the streets against the British proposal for the Malayan Union.

Blogger Maria A. Samad had rightly headlined its post as "A lesson in history for our leaders... lest they forget"

MUST READ: HERE, and HERE,and HERE and HERE. (and more on Fahmi Reza's Blog)

It is a pity that, despite being described as a safe pair of hands and the son of an ulamak, Prime Minister Abdullah Ahmad Badawi’s approval rating has not improved much since he took over from Dr Mahathir four years ago with that great promise of fighting corruption, abuse of power and so on.

In any leadership, the popularity of the leader, will, to a large extent, depend on the integrity and performance of his ministers. 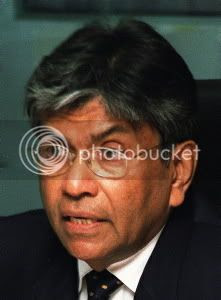 The antics of Information Minister Zainuddin Maidin (Zam) and Minister at the Prime Minister’s Department Mohd Nazri Abdul Aziz are becoming more of a liability than an asset.

They are not helping at all to improve the government’s standing in the eyes of the informed rakyat. Read here a commentary on the "Village Idiot"

Both ministers have developed a great tendency to shoot their mouths, which more often than not, embarrasses the government and lands mud on their faces.

Furthermore, very often they project themselves to be more intolerant and right-wing than Abdullah himself, a reflection of their own intellectual immaturity.
They seem to act like Bush, “You are either with us or against us.”

In light of the recent “illegal” public rally, Zam, when asked by Al Jazeera for his comment, had nothing but rants and accusations that the Qatar-owned international TV news station of were being anti-Malaysia.
His ranting went on and on, not allowing the TV station’s journalist to ask him simple questions like; Isn’t demonstration part of a democracy, especially in a country like Malaysia where the main newspapers and all the TV stations are either owned by the ruling parties or the government?

As information minister, Zam should be brave enough to demand a studio dialogue with members of Bersih or the opposition. If Zam has failed to grasp this opportunity to improve the government’s image then he is only bringing the government into disrepute.
Nazri, on the other hand, have also caused much embarrassment to the government with his ill-informed statements and misplaced arrogance.

In a Westminster-style cabinet government, there are times the prime minister will throw his cabinet colleagues “to the wolves”, that is to say, to the opposition and the media for their stupid statements or behaviour.
This is what Abdullah should do.

Kelantan Menteri Besar Nik Aziz, who has shown that in some situations he can do business with Abdullah, has asked the prime minister to replace Zam as information minister because, according to him, RTM news had unjustly repeated stories and pictures of him after he was questioned about corruption.
Clearly Zam and Nazri are falling short of their stature as government ministers and Abdullah should seriously consider getting rid of this duo and consigned them to the rank of gasbags among the backbenchers.
Posted by Malaysian Unplug at 22:51:00