The Obstacle to the Future Well-Being of Malaysian Society: UMNO's Divisive Politics

Article by Dr. Farish A. Noor of "The Other Malaysia" Blog. Read here

(Dr. Farish A. Noor is a Malaysian political scientist and historian at the Centre for Modern Orient Studies (Zentrum Moderner Orient), Berlin, and affiliated Professor at both Universitas Muhammadiyah Surakarta (UMS) and Sunan Kalijaga Islamic University, Jogjakarta.He is the author of 'Writings on the War on Terror' (2006), 'From Majapahit to Putrajaya' (2005) and 'Islam Embedded: The Historical Development of PAS' (2004).)

Read HERE Commentary by Gerard Lourdesamy in Letter to Editor, Malaysiakini, "The nation being held hostage by one party"

" Like their parents, the 18 children detained at Saturday's illegal rally in Kuala Lumpur are now in hot water. The Education Ministry is taking a dim view of their participation and will be getting their names from the police.

Deputy Education Minister Datuk Noh Omar said the students must be rehabilitated and made aware that they had to abide by the law. "They will not be expelled, but they will be taught what is right and wrong," he said at the Putrajaya students' discipline enhancement programme yesterday."
Read here for more

So now its ‘political rehabilitation’, is it?

As a corrective measure for kids who go to demonstrations and who have been ‘bad’ in the eyes of the government?

That Malaysia’s leaders can even suggest such a thing speaks volumes about the extent to which the space of alienation between the state and the nation has grown over the years, and points to the lack of contact, communication and understanding between the powers-that-be and the real Malaysian nation made up of the rest of us.

But are we surprised?

After all, this is the same country whose geography is now cluttered with a smattering of ‘faith rehabilitation centres’ that have been set up under the auspices of an Islamist project said to promote some skewered vision of a modern, pluralist, democratic Islam that is benevolent and accommodative: So accommodative in fact that it can accommodate dozens, if not hundreds, of Malaysian citizens deemed ‘immoral’, ‘deviant’, ‘apostate’ and out of the ordinary according to the norms set by an invisible and unaccountable cabal of Islamic experts in the pay of the state.

We already have rehabilitation centres whose job it is to ‘turn over’ these alleged deviants and misfits and force them to conform to the normative praxis of Islam that is deemed correct by the state.

So, should we be surprised if the leaders of UMNO and the Government can go one step further and call for the rehabilitation of children as well?

Squandering of the Country's Future by UMNO

Malaysia seems to be a textbook example of postcolonial development turned awry. 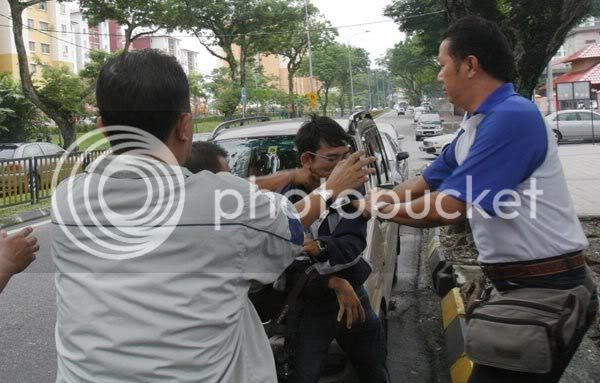 A group of Umno members disrupted a press conference called by a MP, during which a Chinese press photographer was punched and verbally assaulted yesterday. Read here for more on Screenshots
(Photo courtesy of Malaysia Chinese Photojournalists Association (MCPA)
What began as a country with so much promise – its plural racial and ethnic composition, blessed with plentiful resources that was also strategically located at the cross-roads between East and West – has been squandered.

That Malaysia’s leaders still CANNOT understand and appreciate the extent of dissatisfaction, frustration and cynicism among the Malaysian public points to a state that has concentrated all power – including educational and mediatic – in the hands of an alienated ruling elite.

Since the 1980s practically every institution of the state has undergone a serious compromise thanks to the dominance of the Executive at the expense of all other arms of the state apparatus:

Clique of Ruling Families in UMNO

(These) have all created an increasingly small and narrow political arena that has come to be dominated by a small clique of power-hungry politicians and RULING FAMILIES.

Worst still is the fact that the ruling elite of the country – made up as it is by a handful of key families of the UMNO fraternity – has come to believe its own rhetoric and the story they have spun for themselves:

Their continued reliance on the state-controlled media to disseminate this inbred propaganda they have invented for themselves fails to note the fact:

Dismissive accounts of demonstrations as being ‘un-Malay’ and ‘un-Malaysian’ have clearly fallen on deaf ears, as the younger generation of Malaysians could not care less about courtly protocol, the symbolism of UMNO and its nationalist rhetoric, the appeals to racial superiority and unity, etc.

Despite the now tiresome brandishing of the keris and frothy speeches about Malay unity at the recent UMNO assembly, many of the thousands of demonstrators who took to the streets of Kuala Lumpur last weekend happened to be Malay: the very same community that is NO longer beholden to UMNO and immune to its fanciful appeals to racial cohesion and unity.

So what does the future hold for Malaysian society and where will the events of 10th November lead us?

It is clear that the Bersih demonstration had managed to do the one thing that the leaders of the Barisan Nasional dread above all:

To bring together Malaysians from ALL walks of life and cultural backgrounds on ONE neutral issue that UNITES rather than divides their interests.

The fact that the Islamists of PAS and the secular leftists of DAP could come together along with the activists of PKR and the NGOs suggests that the civic spirit of Malaysians is not quite dead, despite all attempts to squash any attempt at multi-racial and cross-communal political activism in the country.

Unable and unwilling to accept the new realities on the ground, the political elite of Malaysia has resorted to the same worn out clichés and the call to rehabilitate the younger Malaysians who were present at the demonstration reveals the extent to which this ruling elite is so thoroughly bankrupt of ideas.

No, it is NOT the younger Malaysians who are in need of rehabilitation. In fact, every young citizen should be made aware of her and his rights and responsibilities as early as possible, as a rite of civic membership.

If anyone is in need of rehabilitation, it is the politicians and ruling elite of Malaysia themselves, who should learn that this diverse and plural society of ours happens to be a complex nation undergoing a slow democratic transformation and that the future of Malaysian politics should reflect this multicultural diversity.

So I strongly suggest that the right-wing communitarian leaders of Malaysia sign up for their own rehab courses as soon as possible, for their and our own good, and learn the following:

And while taking these basic lessons in democracy, DO LEAVE THE KIDS ALONE!

At least they don’t go on the stage brandishing weapons and screeching about racial superiority. They are too matured to do such stupid things!