Zulkifli Noordin is using his position as PKR MP to undertake his "personal crusade" or his JIHAD mission to amend the Federal Constitution on the status of Islam. (Read below)

As far as we know, Zulkifli Noordin (PKR MP, Kulim-Bandar Baru) was NOT elected or nominated by ALLAH to sit in the Malaysian Federal Parliament.

Nor did his or Pakatan Rakyat's campaign slogan in the lead up to 8 March 2008 election was to send him to Parliament to fight for the rights and privileges of Allah.

He was not even a PAS candidate, for crying out loud.

But we do know that Zulkifli Noordin was voted in by a multi-racial and multi-religious constituency for Parti KeAdilan Rakyat under the PAKATAN RAKYAT banner, following the massive rejection of UMNO/BN's racially and religiously bigoted policies over the last 50 years.

Zulkifli Noordin is supposed to be a Member of Parliament FIRST AND FOREMOST, and as a Muslim, second, not the other way round.

And the Malaysian Parliament is NOT the place for him to pursue, in his own words, "his personal crusade" to fight for Allah's rights and responsibilities.

We also know that ALLAH has more than enough supporters in the Islamic world to protect His rights and privileges on earth and elsewhere.

It is time for Anwar Ibrahim and Parti KeAdilan Rakyat to bring Zulkifli Noordin to task for continuing his uncalled-for jihad in Parliament and on the streets as he did so during the rowdy demonstration at the Bar Council forum last year.

We stress the fact that Malaysians did NOT give their precious votes to PAKATAN RAKYAT or Parti KeAdilan Rakyat for its representatives to sit in the Federal Parliament to fight for Allah, God, Jehovah, Guru Nanak, Jesus Christ, Buddha or Lord Krishna's rights and privileges for that matter.

Malaysians who voted for Pakatan Rakyat now is fully convinced that Zulkifli Noordin has forfeited the mandate given to him to be THEIR representative in Parliament.

Zulkifli Noordin should resign from Parliament so that he can peacefully become a Muslim FIRST to pursue his personal jihad in other more appropriate forum.
-Malaysian Unplug 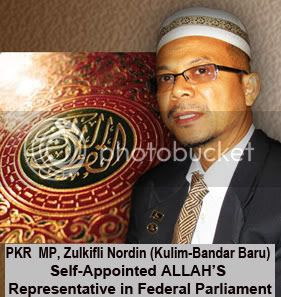 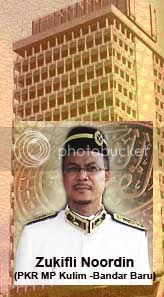 " (I am)a Muslim FIRST, a Member of Parliament, SECOND."

" We Muslims have been tolerant enough all this while, for so many years we have been asked, forced to live under the law that is not Islam. We have been forced."

"It is my personal jihad to uphold the right of Muslims to profess and practise their Islamic religion. If I have to die in doing so, then I'm more than happy to give my soul for that struggle. It is my jihad to do so.

I'm nothing but an instrument of Allah to achieve just that."
-MP Zulkifli Noordin

WE SAY:
This is what voters in Kulim-Bandar Baru
should think in the NEXT General Election 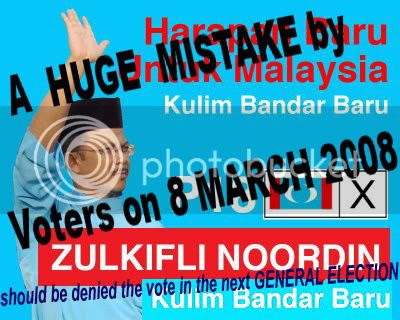 Parti Keadilan Rakyat (PKR) Member of Parliament (MP) Zulkifli Noordin has tried to move four motions in Parliament to amend the Federal Constitution regarding the status of Islam.

The first motion is to amend Article 3(1) to: "Islam is the religion of the Federation, including in terms of laws and legislation."

The second motion proposes to amend Article 4(1) to: "This Constitution is the supreme law of the Federation and, except for Islamic laws and legislation, any law passed after Merdeka Day which is inconsistent with this Constitution shall, to the extent of the inconsistency, be void."

The third motion proposes to amend Article 11(1) to: "Every person has the right to profess and practise his religion, including changing his religion except for those adhering to Islam who must be subject to Islamic laws and legislation. To define those who adhere to Islam, the question of conversion to or apostasy from Islam must be determined by the syariah courts, which have absolute authority over the matter."

The fourth motion is to amend the Ninth Schedule, List 2(1) to expand the powers of the syariah courts to try, judge and sentence non-conforming Muslims in accordance to Islamic laws and legislation.

In this motion, Zulkifli also asks for the Syariah Courts (Criminal Jurisdiction) Act 1965 to be amended accordingly.

In an interview with Nutgraph website, MP Zulkifli Noordin, who was elected under the Pakatan Rakyat banner by a multi-religious and multi-racial constituency, said,

" Those motions PERSONAL crusade. I don't even know what is PKR's stand on this issue. I do wish that PKR would make a very clear stand.

I believe in this verse: "If you assist Allah in His religion, He will assist you and put you in a firm position." (Al Quran, Surah Muhammad, Verse 30).

It is my personal jihad to uphold the right of Muslims to profess and practise their Islamic religion. And I will do so to my last breath. If I have to die in doing so, then I'm more than happy to give my soul for that struggle. It is my jihad to do so.

The big question that Muslims are asking now is, can we have our lives as Muslims back? And I'm nothing but an instrument of Allah to achieve just that — we Muslims just want our lives back."

He is also trying to move 16 other motions, some of which involve elevating the status of Islam, but these do not entail constitutional amendments.

These motions were published in the Dewan Rakyat's Order Paper, dated 16 March 2009.

However, PKR vice-president R Sivarasa dismissed concerns about the controversial MP's motions, and told The Nut Graph: "These are Zulkifli's personal views — the party doesn't endorse those views."

As of 16 March, Zulkifli's motions were listed at the bottom of 65 motions being moved in Parliament.

Zulkifli was a prominent participant in the 300-strong demonstration against the Bar Council forum Conversion to Islam on 9 Aug 2008, together with others from PKR, PAS, Umno and various Muslim non-governmental organisations.

He was given a show cause letter by his party on 7 Sept 2008, but publicly refused to apologise for his actions.

After delaying action on Zulkifli for months, PKR deputy president Syed Husin Ali said on 5 March 2009 that the matter had been "settled internally" some time in 2008. Syed Husin declined, however, to elaborate on how the matter was settled.
Posted by Malaysian Unplug at 10:06:00

Just what we need another fanatic!