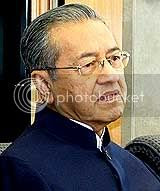 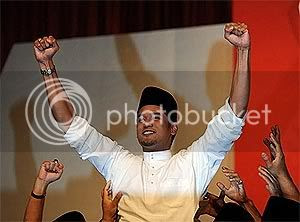 Read here for more in Malaysian Insider and Malaysiakini

In a post on his blog, Dr Mahathir Mohamad, a former UMNO President, said that he did not attend the opening of the Umno general assembly yesterday because Umno Youth openly sanctioned money politics by electing Khairy.

Mahathir wondered whether the rest of Malaysia would accept a leader like Khairy. He was unhappy that Khairy was let off with a warning by the disciplinary board while Malacca Chief Minister Datuk Ali Rustam was barred from contesting the deputy president's position for breaching party ethics.

They picked as their leader someone who was found guilty of using money and other inducements in his effort to get elected as the head of Umno Youth.

Never before has a person who has been acknowledged as corrupt by the party disciplinary board, by the party and the public being elected and hailed as the leader.

UMNO Youth has sullied the image of the party and the Malays. It appears that money is more important than one's race and country.

The PM should not talk about rejecting corrupt leaders because his son-in-law who is corrupt has been given special treatment.

This episode will further erode the people's confidence in Umno."

Dr Mahathir's comments are probably borne out of frustration of being unable to convince party delegates to end Khairy's political career in Umno.

(Dr Mahathir's) venom was aimed directly at Khairy Jamaluddin, the politician who defeated Datuk Mukhriz Mahathir on the way to becoming the Umno Youth chief.

Some of the vitriol was also sprayed on the youth wing and Datuk Seri Abdullah Ahmad Badawi, both whom he accused of turning a blind eye to corruption in Umno.

Dr Mahathir's tirade is likely to widen the rift in Umno Youth following Khairy's victory on Wednesday and appeared designed to put pressure on Datuk Seri Najib Tun Razak to exclude Abdullah's son-in-law from the Cabinet.

If allowed to fester, this bad blood could have an impact on the three by-elections as well as force a confrontation between some Umno leaders and Dr Mahathir.

In the run-up to the party elections, he attacked Khairy repeatedly and cautioned the 790 Umno Youth delegates against voting for him, labeling him as corrupt.

His campaign did not bear dividends and his son polled 230 votes to finish third behind Khairy and former Selangor Mentri Besar Datuk Dr Khir Toyo.

Hounding Abdullah and Khairy has become a preoccupation for the former prime minister, who has identified the both of them as the villains who undermined his legacy.

Yes, sore loser and sour grape. But he is right.

Yes, sore loser and sour grapes. But he is right. But Pak Lah is also right. So what do we do. Ramlax