The Hidden and Neglected Side of Malaysia

Last Thursday I visited Rumah Nur Salam, a centre for homeless children in KL’s Jalan Chow Kit area. Rumah Nur Salam is founded and led by the indefatigable Dr Hartini Zainuddin, the daughter of dear departed friend of mine.

I spent some time with the children and toured the centre, which is, as its name implies, a haven of peace in a very troubled area.

Here, in Chow Kit, in the heart of Kuala Lumpur, less than a kilometre from the Twin Towers and a stone’s thrown from PWTC, life is cheap, drug users shoot up in the back alleys and children wander the streets hungry.

Infants are bought and sold by syndicates, young children are supplied for prostitution and child-pornography.

Hundreds of children are on the streets or homeless. They beg and hustle and sell themselves for sex. They are runaways or abandoned or neglected children, vulnerable to STD and HIV, to drug addiction and to rape and murder. Many among them have no registration papers. 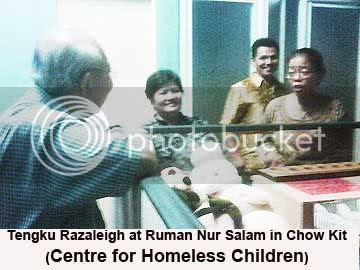 Although they may have been born to Malaysian parents they are “stateless” and therefore ineligible for free inoculation, medical education or education. They are abused and traded with impunity by criminals and corrupt officials because when they disappear it is without trace. They are nobody’s constituency.

Homeless children and street children in Malaysia number in the tens of thousands. They are in Chow Kit, but also in Dengkil, Jinjang, Pantai Dalam, Kepong, Selayang, Subang Jaya, Petaling Street and Pudu and in the bigger towns across the country.

In Sabah and Sarawak, the problem of stateless children is acute.

I sat down to listen to a small circle of community leaders, social workers and volunteers. Some worked with these children. Others worked with other “at risk” groups such as prostitutes, drug users and transsexuals. 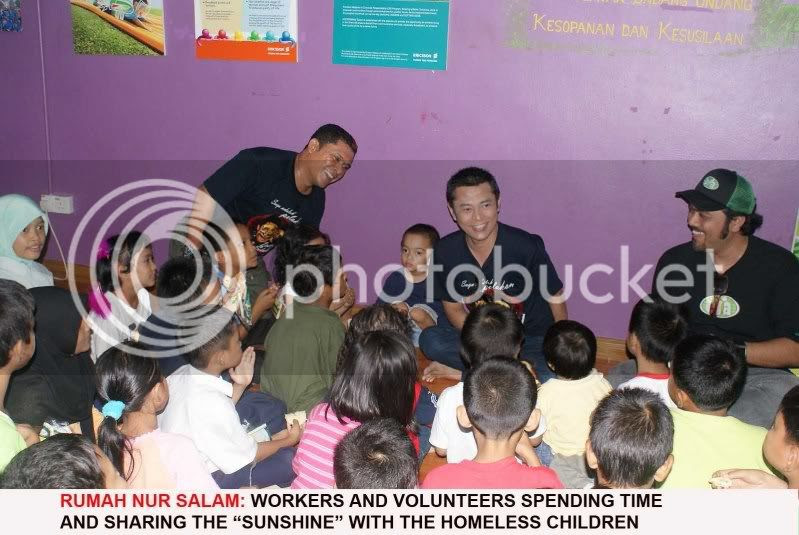 What these groups have in common is that they are rejected by society. Many of the leaders come from the very groups they now serve. Having picked themselves up, they immediately felt called to give back to others. The work they do is more than a job. It is a full-time commitment around which they have shaped their lives. Some have served here for decades, walking daily up and down streets that the police recently considered “too unsafe” to keep a beat base open in.

They told me of a set of linked issues: poverty, bigotry, crime, social breakdown and bureaucratic indifference. They spoke about government that could not join the dots between ministries to help people, and of announcements of assistance that amounted to nothing.

Having served a constituency in the depths of Kelantan for forty years, I have seen my share of poverty, but urban poverty is brutal. The family unit is broken. Women and children are left to fend for themselves. The weak are prey to the strong. People are bought and sold like things.

Chow Kit holds up a mirror to our society. It is an image we would rather not see.

The way we treat the weakest among us places the worth of our entire society in the balance. In God’s sight this weighs more than all the wealth we could accumulate.

There is another sense in which urban poverty test us. It is the weathervane of our social and economic ills. Since December, the number of abandoned children has risen dramatically. For the children freshly abandoned to the street, and for their parents, the recession occurred more quickly, and undeniably, than for our leaders.

Behind the evasive and woolly talk we have had about growth figures and fiscal stimuli are the absolutely tangible consequences of our policy decisions in the lives of ordinary people. Economic management, or the lack of it, has disproportionate consequences on the life-prospects of the most vulnerable members of our society.

I came away humbled by the visit. The quiet, day by day heroism of the community leaders and volunteers working to make a difference in Chow Kit was a lesson in leadership as service. I am grateful for all that they and the children shared with me with such open hearts.

Rumah Nur Salam, which includes Pusat Aktiviti Kanak Kanak, Chow Kit, is a 24 hour activity center and 'safehouse' that wants to provide a 'safe,' healthy and loving environment for all children under the age of 18, living or loitering, in and around the Chow Kit area of KL. Children registered at the center are given food, shelter and are exposed to educational, health and recreational activities and programs that otherwise may not be accessible to them.

Who are these kids? Most of the children are poor and discriminated against and are, from the areas around Chow Kit and the greater parts of KL. They are, for the most part, unable to have their basic needs met and there is little adult supervision. Thus, many children stay on the streets in the middle of the night and are deemed as 'high risk' children.

Rumah Nur Salam is a collaboration project between the Department of Welfare (JKM), Wilayah and Yayasan Salam, Malaysia to assist, protect and address the issues that these children face and to provide a 'safe' zone or sanctuary for them.

The volunteers and staff who were at the Centre soon realized that the children and the community in Chow Kit had many issues that was beyond the scope of the activity.

One of the shocking realization was that come 5.00 pm, many children had nowhere to go to. They were in the streets! Then we realized that children were being exploited in many ways; including physically and sexually. Then there was child trafficking; even parents were selling their own children.

There was an underlying reason for all of these problems and more. The parents of these children we were working with were themselves marginalized and poor. Many of them were drug addicts, sex workers, homeless, to name a few. Besides there were many who were undocumented and/or stateless.

There are 4 major areas under which the different programs run:

1. PAKK, Chow Kit (10am to 5pm) and Rumah Nur Salam, which runs programs from 5pm till 11pm, every day of the week. We have educational activities and have started with health and recreational programs too, but are short of volunteers to help children with homework supervision ( from 5pm -11pm) and other programs and activities within and outside of the center, on a weekly basis.

2. The Pantry Program, which intends to open from 5pm to 7pm every day of the week. We intend to provide all children who come to the center with at least one hot meal a day, for now. Currently, the Pantry program only runs on Saturdays and Sundays, where we provide dinner meals for 70 children. We are looking for sponsors and donors who can provide dinner for the children during the weekdays.

3. The Overnight 'Guest' Program, will house the first 40 children, under the age of 12 with shelter and a bed if they have no where to sleep for the night or if their parents cannot pick them up before 11pm. The program is strictly on a' first come, first serve' basis because we cannot accommodate more than 20 boys and 20 girls each night. There are wardens for both boys and girls on each floor, to ensure the safety of the children.

4. The Outreach Program is where we work with the Chow Kit community to assist with children in need or at risk and bring them to the center or refer them to the appropriate authorities or NGO bodies who can better assist these children. Among the cases brought to our attention are abandoned children, children of neglect and abuse, teenage pregnancies, sex workers who are also drug addicts with infants and children, runways, children in extreme cases of poverty and danger.

HOW TO MAKE A DONATION:

If you'd like to make a donation, please write your check to Yayasan Salam, Malaysia.

At the back of check, write Rumah Nur Salam and the program that you'd like to donate to:

Do provide with a return address and contact name and no for tax exemption purposes. Every donation over RM50 is subject to a tax exemption status.

HOW TO BE A VOLUNTEER

Passionate, committed and eager individuals register with Yayasan Salam, Malaysia. After undergoing an orientation workshop with Salam, volunteers then sign up with the different programs offered to the children at NurSalam.

You can sign up as a volunteer to work and interact with the children for as many hours a week as you like or ( if you have limited time) once a month and/or Nur Salam programs that happen once in 6 months or once a year.

You will be assigned to team leaders and project managers who will assist and support volunteers on site.

Nur Salam is a volunteer driven center that count on people like you to ensure success and provide the children with a better life and better options.