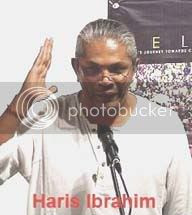 ".. The Bukit Gantang by-election is NOT a contest between Anwar and the Sultan.

Simply, its about PEOPLE POWER.

Not by the prerogative of the Sultan, but the WILL of the people.Yes, the majority of the people of Perak rejected BN and its arrogant disregard of the wishes and needs of the people.

The people of Bukit Gantang, for and on behalf of every decent Perakian, on the other hand, would now have the opportunity to make known to their constitutional monarch that, either by reason of being ill-informed or ill-advised, His Majesty had erred.

Whether His Majesty responds appropriately thereafter remains to be seen.

And a vote in favour of Nizar over the BN candidate would send home the strongest of signals to every institution established under the federal and every state constitution : that the WILL of the PEOPLE may be delayed, but can NEVER be forever denied.

That, in my view, is the significance of the Bukit Gantang by-election. ..." Read here for more
-Haris Ibrahim

"Bukit Gantang by-election: Anwar vs the Sultan
.... A Pakatan Rakyat victory at Bukit Gantang can and will be used as proof, beyond any doubt, that Sultan Azlan Shah should not have given back the state of Perak to Barisan Nasional. That the HRH's decision was against the wishes of his people, who want PR and not BN to represent them.

Fielding Nizar in Bukit Gantang is a political statement. If he wins, the former Perak MB, hailed by some as the modern Hang Jebat for his "mohon derhaka" antic, would be seen as having won not just against the BN but, more importantly, against the Sultan.It will prove that this Jebat Moden was right and that the Sultan had wronged him.Defeat is unthinkable.

PR has won all by-elections since March 2008 and is the incumbent for constituency.Also, BN victory in Bukit Gantang will be seen as the people's support not just for the Sultan but also for Najib Razak, who's expected to be sworn in as our 6th Prime Minister on April 3, just four days before the three by-elections. Read here for more

A certain blogger (read: Rocky's Bru) has it that the Bukit Gantang by-election is really a contest between Anwar and the Sultan.

Clearly, this blogger, whilst steeped in experience in the media industry, having served UMNO-owned and controlled newspapers for a long, long time, does not quite appreciate the divisions of power within our constitutional set up.

Or maybe this blogger suffered a lapse of memory, thinking he was still writing for the UMNO-owned newspapers.

No, the Bukit Gantang by-election is not a contest between Anwar and the Sultan.

Simply, its about people power.

You see, a little over a year ago, Malaysians went to the polls and inflicted a painful lesson on BN such as it had never suffered before.

The people of Perak, too, wanted change.

And through that power that the constitution bestows on the people to determine who shall govern, the majority of the people of Perak decided that they had had enough of BN and voted for change.

And so, the Pakatan Rakyat state government of Perak was born by the will of the majority of the people of Perak.

Not by the prerogative of the Sultan, but the will of the people.

Yes, the majority of the people of Perak rejected BN and its arrogant disregard of the wishes and needs of the people.

We all know now what followed.

Nizar asked for a dissolution of the assembly and for fresh state elections.

Najib asked that BN be allowed to form the new state government.

And in the crisis that ensued, so many Perakians beseeched His Majesty not to do that which would deny them their government of choice.

And so, with the installation of BN as the new state government, the voice and the will of the people of Perak that had spoken on 8th March, 2008, was silenced.

And then, almost as if some divine force had heard the cries of the people, Bukit Gantang fell vacant.

A seat won by BN Pakatan at the last elections was to be contested.