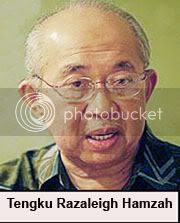 “I think that constitutional rule in Perak has collapsed and the only way to rectify the situation is to go back to the people.

That would be the appropriate thing for the Ruler to do.

The rakyat (people) of Perak are his subjects . So in the end, he has to side with his people.

Umno should be magnanimous and be the first to call for elections. It would be an elegant solution and it would certainly save the Ruler further embarrassment.

It may not be good for Barisan but we have NO choice. We can't go on with this impasse.”

The reference is to Sultan Azlan Shah, the state's monarch who, on Feb 2, rejected a request by Perak's then Menteri Besar Datuk Seri Nizar Jamaluddin — of the Pakatan Rakyat opposition alliance — to dissolve the state's assembly and pave the way for fresh polls.

Most of the calls for fresh polls — except for anonymous commentators on Internet websites — generally tip-toe around the episode's background for fear of offending either the Sultan or the BN.

Tengku Razaleigh didn't have any such compunction. He has the gravitas to carry off such a statement — some quarters might consider it lese-majeste — because he is a royal himself, being the uncle of the Sultan of Kelantan. In addition, he is an elder statesman of Umno, having narrowly lost its presidency in 1987 to former premier Tun Dr Mahathir Mohamad by a scant 44 votes.

On why the elections were not called, Tengku Razaleigh said,

“The chances are that we (the BN) will lose badly in Perak. That seems to be why they are reluctant to have the Sultan dissolve the assembly.”

This is not good and I fear for the future.

I have no claim for the throne anywhere so I can be frank but I would like to see the MONARCHY strong.

It's unfortunate that it happened the way it did in Perak."