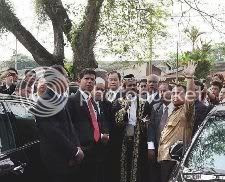 "In full robes and pageantry,

He held the state assembly

In a car park under a tree"
-Anon 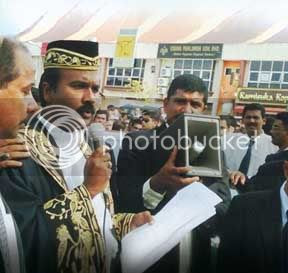 SYMBOL OF DEMOCRACY ?
NOT THIS ONE 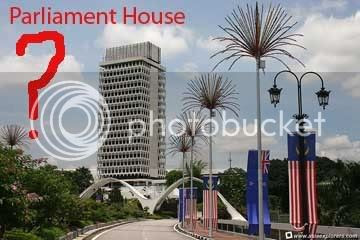 Why NOT THIS one?
On 26 February, the youth wing of the government ruling party, UMNO STOPPED a Member of Parliament ( MP) from entering Parliament.

Bernama reported group of 15 Selangor Umno Youth members were allowed to enter Parliament compound to stop DAP chairman Karpal Singh from entering Parliament House.The incident occurred at about 2.30pm and caused tension for 15 minutes when the Umno Youth members and several DAP MPs including Karpal Singh's son, Gobind Singh Deo, who is also the MP for Puchong, challenged each other. 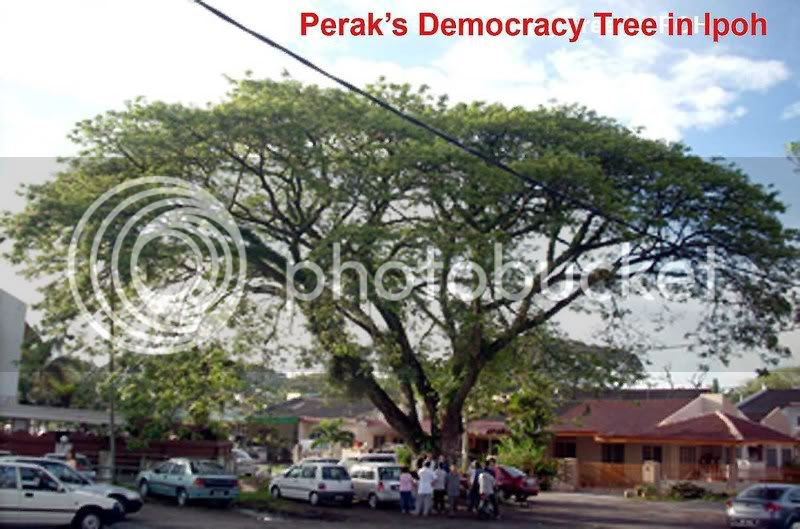 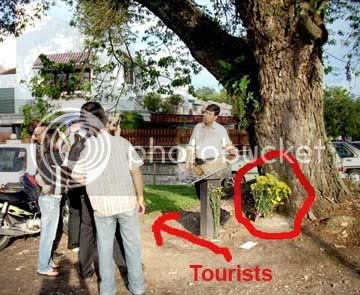 The main gate of the Perak Darul Ridzuan building here which houses the Perak Legislative Assembly was closed on March 3. Police roadblocks were erected along the main road leading to the state secretariat in Ipoh. Four Federal Reserve Unit trucks were on standby behind the secretariat building. 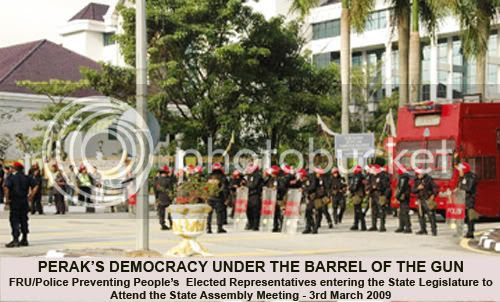 Sivakumar, dressed in full ceremonial attire of black robes and songkok, then convened the emergency session of the assembly at about 10.20am in the shade of a tree, with the Pakatan Rakyat (PR) assemblymen in full attendance.

The Perak State legislative assembly created history on March 3 when it convened its meeting under a tree in the compounds of the state secretariat here, but the sitting was later declared illegal by the Ipoh High Court.
It has already been dubbed 'Pokok Demokrasi' or Democracy Tree and is set to enter the annals of folklore in Ipoh, capital city of Perak state.
In an open space beneath this 60-foot high rainforest tree and another lush mango tree nearby, the state legislative assembly of peninsular Malaysia's second largest state held an emergency session on March 3, as a crowd of several hundred looked on.

The proceedings, held at an open car park, were observed by about 300 bystanders. The PR assemblymen had arrived in a chartered bus, and as expected none of the Barisan Nasional (BN) representatives were present.

The sitting passed a motion of confidence on Datuk Seri Nizar Jamaludin as the menteri besar and endorsed the suspension of BN's Datuk Dr Zambry Abdul Kadir, the mentri besar appointed by the Sultan of Perak, and his six exco members.

The sitting also adopted a motion to recommend to the Sultan to dissolve the assembly, something which Nizar said he would act upon by seeking an audience Sivakumar (holding microphone) presiding over the proceedings at a car park outside the state assembly complex in Ipoh yesterday. Read here for more

It is therefore not surprising that many saw the open-air sitting of the state assembly as a refreshing return to the basics of public participation in a democracy - a return of democracy to the people.
Some are already saying that the area where the Pokok Demokrasi stands should be declared a heritage site by a future government and the raintree made a symbol of democracy in Malaysia.
Others are saying that the story of the Democracy Tree, beneath which the Perak State Assembly solemnly met one morning, will be the stuff of folklore that will be passed down from generation to generation. Read here for more
One visitor to a political blog commented:

''I'll teach my kids to sing this (rhyme) to commemorate this day:

In full robes and pageantry,
He held the state assembly
In a car park under a tree.'' 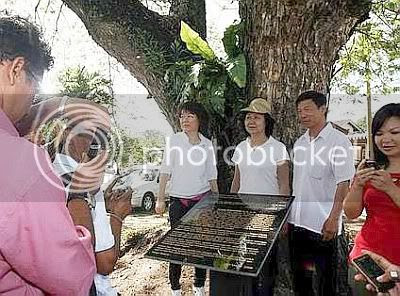 Tourists taking photos with the "Democracy Tree"
Posted by Malaysian Unplug at 19:34:00