Read here for more in The Star 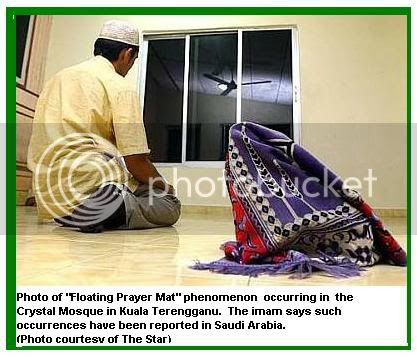 The TERENGGANU CHIEF IMAM, Ustaz Azizi Saidi Abdul Aziz claims that a visitor had seen and photographed prayer mats floating in the mosque . He said such claims are “hardly phenomenal” and people should stop thinking that it was due to genies or ghosts.

A woman from Negri Sembilan who visited the mosque had photographed the phenomenon with a mobile phone camera early this month, triggering fear among locals.

“The occurrence should be seen as a miracle that could be considered a sign from the Al-Mighty.

There is nothing to panic. This is a call to Muslims not to overlook their obligation towards performing prayers together.

Such mystifying occurrences have been reported in SAUDI ARABIA . 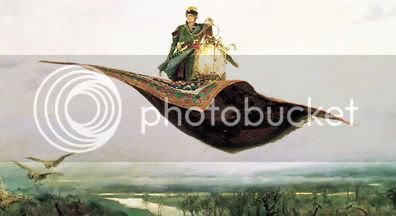 Painting of an Arabian Flying Carpet
The phenomenon could be linked to the lackadaisical attitude of Muslims in the state in performing congregational prayers. There are umpteen mosques in Terengganu but there is a lack of mosque-goers.

Some of our mosques lack people even during Friday prayers."
- Ustaz Azizi Saidi Abdul Aziz,Chief Imam of Terengganu

I wonder if people started to climb aboard these flying rugs, will it put Air Asia out of business? Can we get really cheap flights to say or Sipadan.

This is a foolish and childish thing to say or to believe in.

I am quite surprised that the Chief Imam of Terengganu would even entertain such superstitions and idle talk.

It just goes to show the level of thinking or the thinking that is far from level, which can be exhibited even by someone as grandiose as a Chief Imam.

What next? Flying horses? Hi Yo Silver And away we go.
-Syed Akbar Ali

I don't see any flying mat in the picture. I see a good man praying. Also, to the reporter who's given the title "floating prayer mat", please the fact straight...if anything is floating it has to leave the ground by itself...nothing is so interesting that I can see in the picture.

Another trick from PKR huhu...to stir up some news...need attention here and there....just like their Leader..."Use BM for Math and Science...." omg.....