"Melayu-Babi" Name-Calling Blogger Pasquale from Barking Magpie Blog Denies He is Rusdi Mustapha. Here's the Proof They Both are One and the Same

It's still in Google's cache though...

Does it matter if "Pasquale" of Barking Magpie blog is Rusdi Mustapha or not?

Especially for someone who takes upon himself a political stand, having an inside knowledge in the corridors of power, then calling other fellow Muslim and Malay as "Melayu Babi" and in several postings on Barking Magpie blog, calling a former Deputy Prime Minister and a Malay Muslim Member of Parliament, Datuk Seri Anwar Ibrahim as "YB Babi", it matters.

Calling Datuk Seri Anwar Ibrahim as "YB BABI", whether as acronym or not, is MALICIOUS , whichever way you want to put it:

"..This pretender to the throne, Yang Berhormat Brother Anwar Bin Ibrahim (YB BABI), is a charlatan, and a failed cabinet minister when he was in the government..."
- Posted by Pasquale at 9:29 PM -October 24, 2008

"...BN needs more MPs with substance not court jesters, when Yang Berhormat Brother Anwar Bin Ibrahim (YB BABI) spoke for almost four hours at parliament recently he was giving out half truth information that even borders lying, but nobody seems to be there to talk back, with facts, to him but one. YB BABI was again trying to rely on his self-absorbing ego-maniacal persona that he had used since his ABIM days until he was thrown in jail for treachery to the country and the people.
Posted by Pasquale at 11:47 AM -October 17, 2008

I also know this Sakmongkol he is an ardent anti-Najib just because Najib does not entertained or approve his greedy, corrupt and self-centered attitude!His life serve only himself, he wants project to enrich himnself but when Najib said no he went against him! Ini Melayu babi ni!
-Posted on Rocky Bru's Blog,April 30, 2009: 10:27 PM

Calling another Malay Muslim, "Melayu Babi", is not only a direct insult to the individual, it is an insult worse than calling a fellow Malay, "kurang ajar".

Such malicious term insults his or her RACE,RELIGION ,ANCESTRY , and IMMEDIATE FAMILY.

Thus exposing Pasquale, and if true, he is indeed Rusdi Mustapha, is par for the course in the blogosphere.

More so, if it is true that the blogger "Pasquale" is an aide to the current Prime Minister, Datuk Najib Razak.

Family Members Should NOT be Demonised

We agree fully that other family members should NOT be targeted by bloggers and commenters on blogs. We dissociate ourselves with any nasty comments made against Rusdi Mustapha's family.

And we DEPLORE such actions in no uncertain terms.

However, in the course of trying to investigate and establish whether Pasquale is indeed Rusdi Mustapha or not, it is inevitable that other family members will be identified and named to establish the real identity of Pasquale and/or Rusdi Mustapha, without names and character of their family being demonised.

And if Rusdi Mustapha is indeed Pasquale and is an AIDE to the nation's Prime Minister, his background and profile belong to public domain and he should be subject to PUBLIC scrutiny.

Pasquale (and/or Rusdi Mustapha) must play by the SAME rules with regard to bringing in family members and demonising them.

"Then there was this Azmin Ali, who struck me as a Malay boy who had a very unhappy childhood. ... .He has a sister who accused his boss of having an affair with his (Azmin’s) wife, and she also accused Anwar of buggery.Azmin also has another brother, a very irritating TV "personality", a role model for future Malaysians! Sigh! After watching his brother on TV I am not sure whether this guy is gay, a cross dresser or what. Anyway he is quite irritating to me, just my opinion.
- Posted by Pasquale at 11:58 AM -November 14, 2008

The Attempted Denial that Pasquale is NOT Rusdi Mustapha

Rusdi Mustapha has closed off his "Sri Menanti" blog when it was exposed in Malaysian blogosphere that Pasquale is Rusdi Mustapha .

Well, if he is NOT Pasquale of Barking Magpie blog, Rusdi Mustapha should NOT be afraid to continue blogging openly in his personal "Sri Menanti" Blog. Malaysians have no reason to attack Rusdi or his family if he is NOT Pasquale. He should be able to defend accusations that he is Pasquale.

Pasquale posted on his Barking Magpie blog on 7 June with the heading:

Rocky's Bru wrote in his Blog:

Rusdi may or may not be Pasquale.

Blogger Sakmongkol, who attempted to expose a couple of pro-Umno bloggers the other day, said Rusdi is Pasquale and Pasquale is Rusdi. But the two ladies in the photograph are not Pasquale. They are Rusdi's wife and daughter and they are not related to Pasquale at all.
-Rocky's Bru

"BigDog" in his blog wrote:

We totally agree with Rusdi. If these promoters and supporters of newly acquired fashion cyber anarchism in Malaysia wants bloggers like Pasquale, then they should go after Pasquale.

"BigDog" also commented in a reply to his reader :

Would Blogger "Rocky's Bru" Know Whether Rusdi Mustapha is Pasquale and vice versa?

We believe he does.

To pretend he does not, boggles the mind.

I don't know.....I have always been Bangsa Melayu and Rakyat Malaysia

I was at the opening of the All-Blogs at Damansara Heights recently and the theme was in search of that elusive and proverbial Bangsa Malaysia!

Well to begin with I do not have any problem with what I am, and that is because I am a Malay of a Minangkabau descent, and I have a very, very happy childhood. 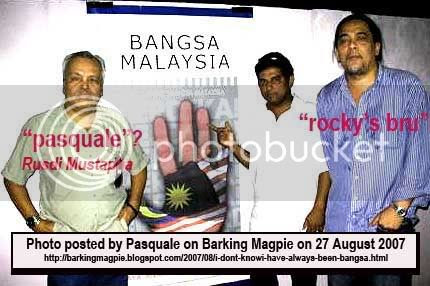 If I am given the opportunity to lead this multi-racial country of about 24 millions morons I shall pass. It is not that easy to govern this country of morons....."
Posted by Pasquale at 11:29 AM -27 August 2007

In the same posting, there was a post-script, as an afterthought, to dissociate pasquale from Rusdi Mustapha:

"P.S. This treatise is written without malice intended. And I hope En Rusdi, En Steven and En Rocky do not mind the picture that I used"-Pasquale

Likewise an attempt to distinguish Pasquale from Rusdi Mustapha in the commentary thread in the same posting:

Of course I mind having my picture appearing on your blog and being called a Moron at that too!!
August 29, 2007 5:01 PM

Below Photo on Rusdi Mustapha's personal blog on "Sri Menanti" (close down from public viewing after 7 June 2009), Rusdi with Rocky's Bru 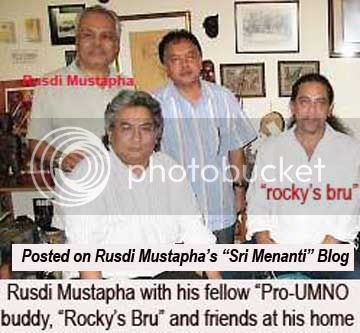 Blogger "Rocky's Bru" talks to Pasquale of Barking Magpie blog AND to Rusdi Mustapha and photographed together.

Are we to believe that blogger Rocky's Bru, a well-known journalist, does not know whether Pasquale is or isn't Rusdi Mustapha?

PASQUALE and RUSDI MUSTAPHA IS ONE AND THE SAME

The following speaks for itself: 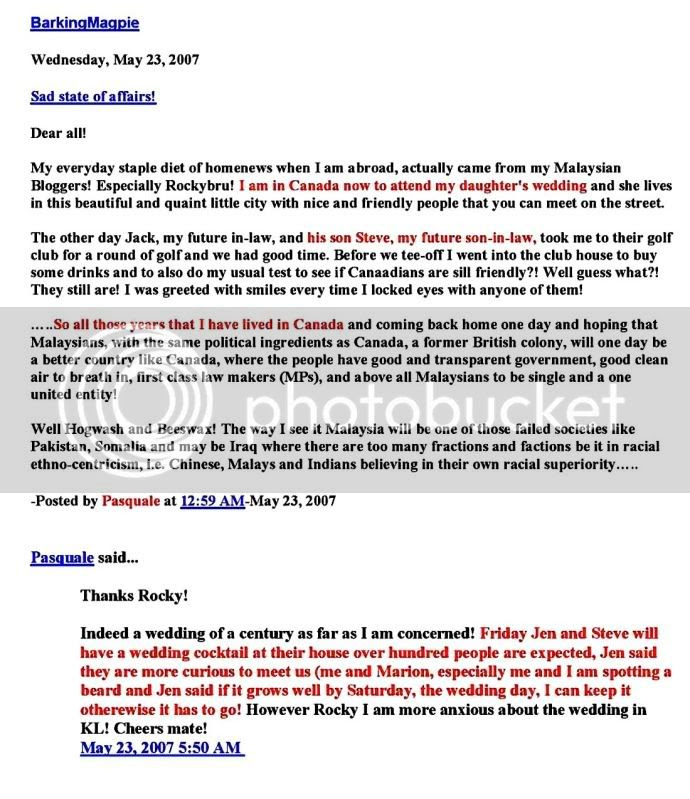 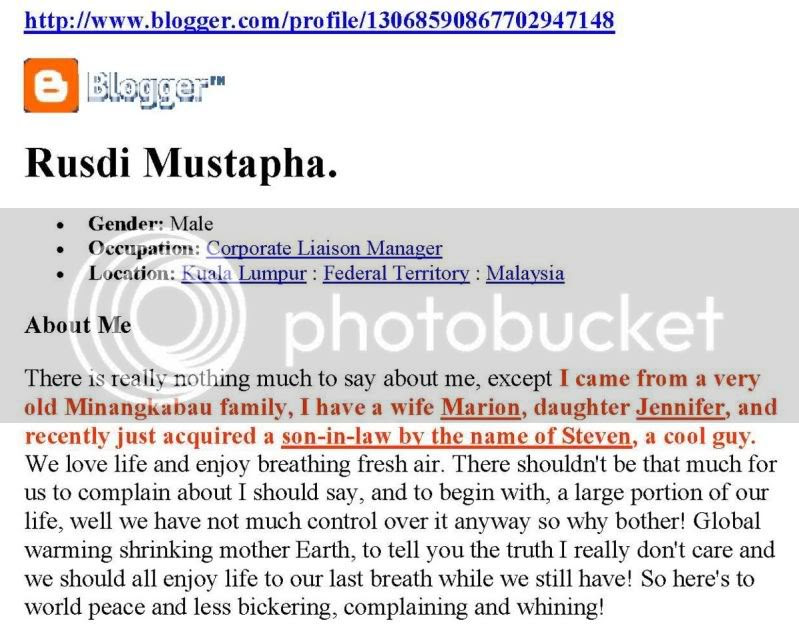 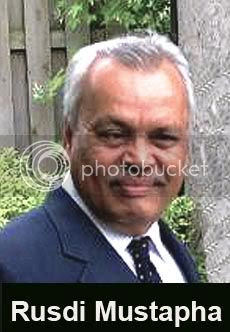 aka Pasquale
of Barking Magpie Blog
(Photo taken "Sri Menanti" Blog)
The footprints of Rusdi Mustapha in Pasquale are all over the place.

We say to Pasquale aka Rusdi Mustapha, an aide to Prime Minister Najib working in the PM's Office, and to his cohorts, stop the LIE and the distortion of the truth.

The fact remains that Rusdi Mustapha via his nickname Pasquale in his Barking Magpie blog has called his fellow Malays and Muslims who disagree with him, as "Melayu Babi" and repeatedly and maliciously called Anwar Ibrahim, "YB BABI".

Pasquale has to be exposed because he has CROSSED the Line of Decency in dealing with his fellow Malaysian Malays and Muslims in the blogosphere.

Coming from someone who is an aide in the Prime Minister's Office and calling a fellow Malay-Muslim, "Melayu-Babi" OR "YB BABI" is simply UNACCEPTABLE, even in blogosphere.
Posted by Malaysian Unplug at 13:01:00

Well done on the detective work linking Pasquale to Rusdi. You have convinced me that both are very likely the same person. We need to know (and act) if our tax dollars are used to employ such a propagandist to work for the PM. In the UK, when Damian McBride, special advisor to Gordon Brown was caught discussing setting up a website to smear political opponents, he was forced to resign. Perhaps the same could be expected of Rusdi.

However, including the names & photographs of Rusdi/Pasquale's wife & daughter has detracted from its effectiveness of your investigation. It was totally unnecessary as part of your investigation, and has justifiably exposed you to criticism. As a web journalist, you need to consider the effect of your work on the safety & security of innocent parties.

Carry on the good investigative work. You should also make an apology to the affected parties like Raja Petra has.

Your point is well taken regarding the photo.

It was meant as evidence of the link between Pasquale and Rusdi Mustapha.

In view of your comment, which we fully agree. We decided to remove the photo on this posting.

If any hurt has touched on Rusdi Mustapha's family on account of our effort to expose Pasquale, we offer our profound apologies to Rusdi's family members.

Wow! What can I say, except - "Fantastic Job"!!
So now it is open for all to see who the real liars are!
BigDoggie and Rocky need to answer this post - and real fast!

It's still in Google's cache though...

Well done, Bravo for the investigative skills you guys posses. See if you can apply in TBH's case. It would be helpful to the nation. It's a pity PDRM has gone been on malfunction mode for qutie soemtime now.
Back to Pasquale/barking magppie, my instincts told me that they were the same guy and thanks for your write up on the issue, my guess was right. Anyway, since we already know who Rusdi Mustafa and Rocky Bru are, not forgetting the other UBN bloggers, what do we do now ???
Hypocirtes are a plenty in this beautiful country, behind the closed door's they booze and once out their dirty mouth is used to vomit the anti non malay venom. Well, God 's creation is full of excitement. We have to swallow or what else.

Well done, Bravo for the investigative skills you guys posses. See if you can apply in TBH's case. It would be helpful to the nation. It's a pity PDRM has gone been on malfunction mode for qutie soemtime now.
Back to Pasquale/barking magppie, my instincts told me that they were the same guy and thanks for your write up on the issue, my guess was right. Anyway, since we already know who Rusdi Mustafa and Rocky Bru are, not forgetting the other UBN bloggers, what do we do now ???
Hypocirtes are a plenty in this beautiful country, behind the closed door's they booze and once out their dirty mouth is used to vomit the anti non malay venom. Well, God 's creation is full of excitement. We have to swallow or what else.