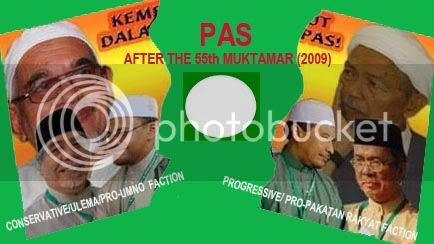 Read here for more in Malaysiakini

Cracks within PAS appeared to be widening after spiritual leader Nik Aziz Nik Mat launched a visceral attack against those seeking closer ties with Umno. And on his firing line were the newly re-elected party president Abdul Hadi Awang and newly appointed party secretary-general Mustafa Ali, both of whom are from Terengganu.

Nik Aziz, who is technically the most powerful person in PAS, said those who supported Abdul Hadi's suggestion to form a unity government with Umno, were "boneka Umno" (Umno stooges).

"We can't ignore the decision of the PAS annual general assembly in Ipoh last year... The decision was to strengthen Pakatan Rakyat.

Those who support the unity (government) are Umno stooges, clearly and obviously ".

To a question on Abdul Hadi's insistence on having a unity government, Nik Aziz said it did not represent the wishes of the party. He said,

That is HIS personal opinion"

On Tuesday, Mustafa urged PAS and Pakatan leaders to stop issuing "confusing" statements on the purported unity talks with Umno. Mustafa said it was important to stop harping on the issue to prevent "negative impressions" regarding the party.

On Mustafa's call for all party and Pakatan leaders to stop issuing statements on the matter, Nik Aziz said there was no reason why the party members cannot discuss the issue. Nik Aziz said,

"The question is, why stop us from talking? The conflict of ideas did not come from PAS, but from certain people within PAS who are in danger... so he (Mustafa) asks people to stop talking. But how can humans stop talking?" .

Since March 2008 last year, PAS leaders such as Abdul Hadi and his deputy Nasharuddin Mat Isa has been floating the idea of forging closer ties with Umno.

The idea was panned by most delegates during the recently concluded 55th PAS Muktamar (general assembly) in Shah Alam, but Abdul Hadi was still adamant about the idea during his winding up speech.

Abdul Hadi also claimed that he had the support of top Pakatan Rakyat leaders, who later distanced themselves from the former's remarks. And today, Abdul Hadi sought to cool frayed nerves suggesting that such talks can only take place if the BN-ruled federal government free the judiciary and the media and respect the doctrine of separation of powers.Until such assurances can be given, Abdul Hadi said all talks about the unity dialogues will remain mere "academic discussions".

PAS leaders from the pro-Pakatan Rakyat (PR) faction are realising the damage done to the party over the unity government proposal. They are now prepared to retaliate against the conservatives who favour forging closer ties with Umno.

Kelantan Mentri Besar Datuk Nik Abdul Aziz Nik Mat and several senior members of the Erdogans faction had a closed-door discussion just after the recently-concluded party muktamar (general assembly) to come up with an action plan against the ulama faction in the party who are still keen on forging closer ties with Umno.

A party insider familiar with the meeting said former vice-president Datuk Husam Musa, who was defeated in the deputy presidential contest, may decline appointment to the central working committee as a sign of protest.

And they are also trying to get another defeated deputy presidential contender Mohamad Sabu not to join the new line-up.

A source who spoke on condition of anonymity said:

“Nik Aziz was very sad with the ongoing debate on a unity government.

We are worried that the idea has become popular among some PAS leaders. In Perak, voices against the dissolution of assembly can already be heard, and in Selangor there are attempts to revive the unity talks with Umno.

The leadership was not serious in resolving the issue; it should have been properly debated during the muktamar.”

Nik Aziz was also disappointed with the outcome of the party election last weekend when ALL Kelantan executive councillors were rejected by the delegates.

Apart from Husam Musa, three other senior Kelantan leaders also lost in the party election. Datuk Mohd Amar Nik Abdullah, a favourite candidate to replace Nik Aziz as Kelantan Mentri Besar, failed to make it in the top three in the vice-presidents' contest.

DAP Tells PAS to Evaluate Its Position in Pakatan Rakyat

Indicating the party has limits to its patience, Karpal said PAS should not push its agenda, which adversely affected the pact.

In a press statement, Karpal said :

“ Hadi has chosen to mislead not only PAS members and leaders, but also the rakyat. Publicly committing deception on the people does not gain Hadi any brownie points.

PAS embarking upon unity talks with Umno is a serious disservice to the sincerity expected of PAS as a component of PR.

PAS should realise that it was not the dominant party in the coalition, as it had only 24 seats in Parliament compared to the 28 held by the DAP and 31 by Parti Keadilan Rakyat (PKR).

PAS should not overextend itself by making statements, particularly through its president Datuk Seri Abdul Hadi Awang to initiate unity talks with Umno."

Karpal Singh also refuted Hadi’s statement that the DAP had agreed to unity talks with Umno as the latter had publicly stated.

On the open attack by PAS on Sisters-In-Islam (SIS), Karpal said the action did not endear PAS to those who supported it in the March general election, and neither did PAS’ insistence that female journalists covering its 55th Muktamar recently be “properly” dressed.

Moreover, the insistence by PAS leaders that Malaysia would be turned into an Islamic state if it came to power was a flagrant and outrageous affront to the Federal Constitution, which specifically proclaims Malaysia to be a secular state, with Islam as the official religion, Karpal said.

In 2005, Nasharuddin Mat Isa was the emerging leader in PAS who was to bridge the two worlds of the Islamist party — the ulama (religious scholars) and the professionals.

A Jordan-trained English-speaking cleric and law lecturer who also studied in Britain, he was at ease in both identities.

Fully behind his rise was the growing group of technocrats and professionals — including vice-president Husam Musa and secretary-general Kamaruddin Jaafar. They helped build Nasharuddin’s image as a “professional ulama”, seeing him as someone who would advance their reformist agenda.

That symbiotic relationship between the ulama class and the reformists now appears to be loosening.

Nasharuddin gradually leaned CLOSER towards the ulama group and led an initiative to forge ties with the ruling Umno in the name of solidarity of the Muslim ummah, despite years of rivalry.

Concerned about possible damage to PAS credibility in the eyes of its opposition partners in the Pakatan Rakyat (PR) alliance and the public, Husam challenged Nasharuddin for the deputy presidency in party elections at the just-concluded muktamar or general assembly.

Nasharuddin however successfully staved off the contest, backed by the party’s senior ulama.

In so doing, the clerics reasserted their traditional kepimpinan ulama — “leadership by the ulama”.

The delegates however prevented total control by the clerics by giving half of the seats in the new leadership to the non-ulama, mainly the professionals.

So what does this mean for the future of PAS and the changing landscape in Malaysian politics ?

Arresting the Rise of the Professionals in PAS

The professionals’ growing influence has been received with some uncertainty by the clerics, although they were not anti-change.

The ulama knew that they could do with this more progressive and urbane group of professionals to reach out to an increasingly demanding electorate — so long as the ulama’s leadership remains unquestioned.

Indeed, it has been a winning combination.

With the ulama providing the party’s religious charisma, and the professionals the organising and strategising skills, PAS scored unprecedented success in the 2008 general election, breaking into the political consciousness of the Chinese and Indian minorities.

Eager to adapt to what is now known as “new politics” — the politics of multiracialism — PAS gradually transitioned itself towards a new image. It now sees its future tied increasingly to a wider electorate that includes not just Malays but also Chinese, Indians and other non-Muslims — a “PAS for all”.

Its new ambition is to be the leading party by the next general election. Should that happen, a new political calculus would be inevitable.

But the evolution, also means a wrenching dilemma. How far should PAS reconcile its Islamic roots with the new demands of multiracial politics?

How can the Islamist party accommodate the growing interest of non-Muslim supporters in PAS — WITHOUT diluting its Islamic identity?

The Conservatives' Fear of Deformation of PAS's Islamic Identity

The fear that its Islamist identity could be “deformed” — in the words of one party leader, Dr Dzulkefly Ahmad — by the changing politics.

(This fear) drove a faction led by Nasharuddin to establish direct links with Umno in “unity talks”.

This search to balance its growing ties with the PR alliance partners — the secularist DAP and multiracial PKR — proved highly controversial and divisive, provoking the current tension within PAS.

The reformists and professionals simply could not put their faith in Umno, seeing a better future with the PR coalition to restructure Malaysian politics.

In challenging Nasharuddin, Husam and the reformists were alerting the ulema to the danger of sending mixed signals and undermining the growing trust with the non-Muslim electorate who have voted for PAS.

Thrown on the defensive, the ulema fought back by drawing on their institutional charisma as the party’s religious elders.

It proved to be still potent, though the professionals managed to recover some ground.

Road ahead for PAS under the Ulema

The big question is whether the reassertion of the ulama will reverse PAS’s ground-breaking transformation into a party that appeals to ALL races.

Though it cannot be totally ruled out, we are unlikely to see the return of the old PAS — an inward-looking party that turns only to the Malay and Muslim heartland.

The ulama leadership would have fathomed by now the crucial need for PAS to continue embracing the other racial and religious communities.That would mean a continued partnership with the professionals.

Just as significantly, Nasharuddin dismissed in no uncertain terms that PAS would form a unity government with Umno, or sacrifice its partnership in the PR coalition — although engagement with Umno through talks would go on.

The ulema have little choice if they are serious about fulfilling the muktamar’s theme of “Islam leading the change” through its universalist message of social justice.The ulama are NOT in the majority in the party.

That majority is formed by the non-ulema — the professionals and activists – who will be the drivers of change.

The ranks of the professionals will also grow over time. And PAS professionals are mostly “home-grown” — members who are well-educated in the various fields of modern knowledge.

PAS has over the years already been evolving from a kampung or village party into an Islam-based contemporary political machine.

Indeed, the muktamar symbolically launched PAS into its next phase with an impressive international convention centre project as its new headquarters in Putrajaya.

It symbolises PAS’ higher ambition of moving closer to the seat of power. Such a lofty goal however would require the ulema to demonstrate effective, not just symbolic, leadership in the new political landscape which the professionals are more at home with.

The ulama leadership have three years before the next general election to prove they are equal to the task of winning the hearts and minds of the non-Muslim electorate.

In the longer term, their bigger challenge is to produce a generation of younger and more politically savvy ulema, headed by a SUITABLE successor to president Hadi Awang to provide forward-looking leadership to a new PAS. That may or may not be Nasharuddin.