Read here for more and here 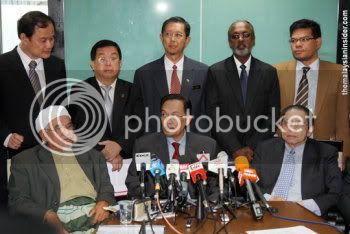 Pakatan Leaders Meeting -June 22, 2009 at Parliament House
(Photo courtesy of Malaysian Insider)
PAS President Hadi Awang made a drastic turnabout, saying the unity government idea was ill-conceived – even by Umno themselves – and that PAS was only willing to “engage” Umno/BN on specific issues and not on Malay and Islamic unity as reported in the past after a meeting of Pakatan leaders today in Parliament House (June 22) .

PAS will hold its central committee meeting tonight where this matter, including the unity talks with Umno, are expected to be the main agenda. Previously, Nik Aziz told Nasharuddin to quit PAS and join Umno in relation to the latter’s support for holding unity talks with Umno.

In a joint statement, they reiterated their loyalty pledge to strengthen the alliance, wanting to focus instead on their preparation for the next general election and a potential takeover of the federal government. PR leaders said that PR is willing to engage Umno/BN on matters such as improving the quality of education, restoring the integrity of the judiciary and eradication of corruption.

"The PR council of leaders reaffirms our rejection of the idea of forming a unity government with Umno/Barisan Nasional.

It is a clearly malicious and desperate attempt to compromise the integrity of the increasingly popular PR."