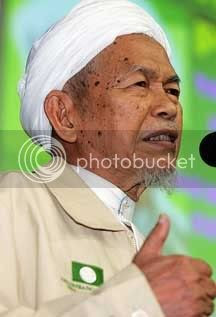 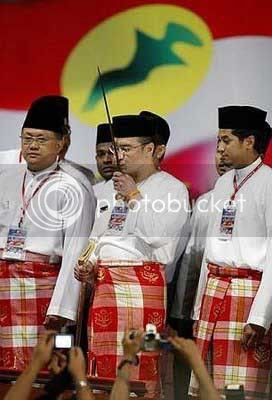 He also reiterated his stand that engagement with Umno is NOT necessary, saying that it would be difficult for PAS to strengthen Pakatan Rakyat (PR) and to work with the Malay nationalist party at the same time.

The Islamist party spiritual advisor was responding to Tan Sri Muhyiddin Yassin's remark on Friday where the deputy prime minister urged PAS to let bygones be bygones and work towards forming a unity government.

"They want me to forgive, they must first admit their mistakes and apologise," Nik Aziz told reporters at his official residence here before meeting Datuk Seri Anwar Ibrahim.

The Kelantan mentri besar added that his opposition to the unity government proposal is consistent with the decision of the PAS muktamar or general assembly last year. 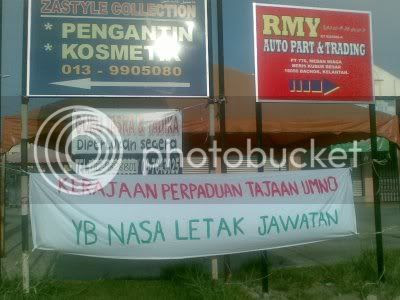 Banner put up in Nasharuddin's Bachok, Kelantan constituency
(Photo courtesy of Kickdefella blog)
"I am not being stubborn, I am just defending the decision of the muktamar. Proper procedure must be followed," said Nik Aziz.

During the party's muktamar early this month, both party president Datuk Seri Abdul Hadi Awang and his deputy Nasharudin Mat Isa promised to remain in PR but would continue talking to Umno on specific issues.

Nik Aziz has continued voicing out opposition to working with Umno and had even asked Nasharudin to leave the party and resign as Bachok MP for his stand on unity talks with their political rivals.

PAS is expected to put an end to the public disagreement through PR leadership meeting and the special central working committee meeting.

Nik Aziz has also called for meeting with Hadi, Nasharudin and leaders who are seen to be in favour of pursuing unity talk with Umno.
Posted by Malaysian Unplug at 18:14:00

all your forces until it breaks. The weakest link in the Pakatan Rakyat is PAS; although PAS leaders are not likely to admit nor

do they see themselves as the weakest link in the Pakatan Rakyat. On the contrary PAS sees itself as the strongest component

of the opposition AND THEREFORE ARE ENTITLED TO LEAD THE PAKATAN RAKYAT; that said it is exactly this demand, whether

actually made or not but the problem arises because such is their expectation. While it may be true that PAS is second in

membership to the UMNO, but PAS is an East Coast Party and without the support of the Chinese & Indians PAS will be shut in

to their east Coast constituency for another 51 years. This is what I mean when I say that PAS is the weakest link. It is

because they have a distorted self view of their own worth to the prospect of Pakatan Rakyat forming the next government.

PAS THEREFORE IS NOT A TEAM PLAYER. IN ANY COALITION, THERE MUST EXIST AS A PRE-CONDITION FOR SUCCESS, TEAM

SPIRIT OR ALL EFFORTS WILL BE LOST.

DAP & PKR need to allow the PAS to solve their own problem. The old saying is that one can bring a horse to the river but one

just cannot make it drink, applies to the situation that the Pakatan Rakyat faces with their partnership with PAS. Those who tout

a PAS unity government with the UMNO wants the perpetuation of the concept of Ketuaan Melayu, while it is the ideology of

the PKR & DAP that Malaysia will progress better with their ideology of Ketuaan Rakyat. These two concepts are distinctly

separate, one excludes the existence of the other; you can only go with UMNO or you need to go with the Pakatan Rakyat.


Mr Lim Kit Siang is absolutely correct, that if PAS joins UMNO to form a unity government, then IT WILL ALSO MEAN NAJIB'S 1

MALAYSIA IS NONSENSE ! What an alliance of PAS & UMNO produce is another 51 years of Ketuaan Melayu, and that will also

If PAS plus UMNO forms government, THEN WHAT ARE THE MCA, GERAKAN, PPP, MIC ...DOING REMAINING IN THE BARISAN

NATIONAL ? What is the relevance of the MCA remaining in the BN, when to all our Chinese brothers & sisters, we already know

that MCA feeds off the hands of UMNO as their dogs ? The recent poll that was posted on Ong Tea Keat's blog reflects correctly

1st class citizens and not as now, we are 2nd class.

the MCA at no time in all of Malaysian history did anything to protect the Chinese from Malay excesses. Forget MCA and

concentrate on the Pakatan Rakyat and live with whatever comes along. YOU CAN ONLY DO SO MUCH.

Latest News!! For the sake of UNITY BN-UMNO giving PAS a WALKOVER in Manek Urai! A graceful gesture of apology to PAS!