Read HERE and HERE for more 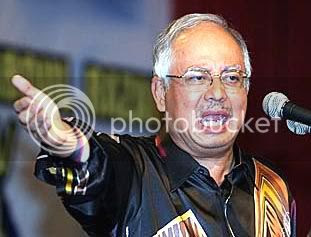 According to Bukit Gelugor MP Karpal Singh, Najib as UMNO Youth Chief in 1987 had vowed to bathe the keris or small sword with Chinese blood in a speech on 17 October 1987.

A Government White Paper entitled “Towards Preserving National Security” tabled in Parliament on 23rd March 1988 recorded that in an UMNO Youth rally led by Najib on 17th October 1987, banners bearing strong words were displayed, including one which said: “SOAK IT (KRIS) WITH CHINESE BLOOD”.

Karpal demanded the PM apologised for the racist remark or be exposed as a hypocrite and the 1Malaysia slogan as meaningless verbose.

Najib denied the accusation and refused to apologise. Read here for more.

He commented the following on Rocky's Bru blog:

And he was not alone in doing this, in fact the others had fanned the atmosphere to point of being that the TPCA Stadium was supposed to be the remake of the a la May 13 launching pad to lynch sombody or some group of people.

Mat Taib was among those who were there to "lend support" and support they did, to the point of being culpable...there was a banner in the background which had an image of a keris dripping with blood...

Lee Kim Sai was to be blamed also for his hard words had "offended" the Malay leaders. These blokes were retaliating to that...

Another reader on Malaysia-Today wrote:

"...Najib is a liar for incidents from Altanthuya murder to "bunuh cina with kris"

I was stayed at Mindef hostel in 1987 which is at walking distance from the Jalan Laut Stadium. Only deaf people could not heard “bunuh Cina” shoutings from Najib and his malay ultra gang.

A former NST Editor had to censored news on that day because it was too sensitive to be published.

All Chinese newspapers reported such anti-Chinese gathering with photos. Some reporters were threatened with death IF they did not leave the stadium..."

Prime Minister Najib Razak played the religious and race card today when he appealed to PAS to reconsider the proposal for a unity government with Umno.

He said that any move to strengthen Islam should be encouraged, in what was an obvious move to appeal to the concept of Islamic brotherhood within PAS

He appealed to PAS to act in the name of Malay and Muslim unity.

“PAS should not let politics prevent it from doing something which is beneficial for Malay/Muslim unity.

It looks like many Muslims are of the same opinion because unity and efforts to fight for Islam are an obligation. When we follow the obligation, we get blessings for whatever we do.

If Islam promotes that, then we should follow its way. Don’t let politics become the obstacle to achieving this.”

Sensing the weakness in the opposition alliance, Umno has moved in an attempt to cause further division in PAS and in PR by pressing ahead with the concept of Malay and Muslim unity.

He did not name or at least giving more specifics about who the “many Muslims” were who shared his disappointment.

“If one really wants to bring out Islam and the majesty and the justice that the religion stands for, why harp on such narrow agenda like unity talks with PAS.

Why keep harping on unity talks with PAS and saying the Malays want it. What Malays is he talking about?

Don’t forget PAS is the second largest Malay party and PKR also has large Malay base, but neither of us want anything to do with unity talks with Umno.”

Why not practise Islam in its full glory by using it to improve the integrity of our judiciary, stopping the abuse of power by the police, the persecution of political foes and minority groups by cruel means and preventing the people in Perak from holding free and fair election?

The Pakatan stand is very clear. There will be no talks at all as far as unity government is concerned. But as we have stated very clearly, we are open to discussion on national issues, such as, how to improve unity in the country, raise educations standards, revive the economy.

If Najib is sincere, then he must prove it - not just to us in Pakatan but to the whole country. Let us start with any one of these issues.

" This is not a safe signal coming from a PM.

We really wonder what he will do next. Fortunately, Malaysians especially the Malays are more politically savvy that he gives them credit for. They will see this for what it is - typical Umno insecurity and corruption.

In his desperation, because politically, this is a desperate move, he is suggesting that both the Muslims and the Malays are under threat,

The top leadership is so morally corrupt that whenever there is difficulty, they will resort to trickery and short-cuts like these. But they cannot buy their way out every time.

Perhaps it is better they begin to seriously accept reality and start to taste the bitter medicine of reform.”

Malaysians have a potentially dangerous PM in their midst.
malsia1206

Born a racist by a racist father, Najis has inherited racism!