"... I will be joining Sdr Kit Siang at a Press Conference tomorrow (25 July 2009, 12.30 pm) on matters relating to the defamatory blog attacking Sdr Ean Yong Hian Wah and me and the Selangor DAP in general.

After having a closer look, I found that the blog (Truth for Teoh Beng Hock) contains nothing but bullshits.

I have put up all details concerning the 2008 allocation for Sg Pelek, Sg Panjang and Pandamaran in this blog in January this year( under annual allocation category)...."

The DAP and those named in the blog "Truth for Teoh Beng Hock" should step forward quickly, refute these highly charged allegations of corruption and theft of public funds, and come clean with Malaysians who had all grieved the death of Teoh Beng Hock.

Whatever the outcomes, we should NOT allow ourselves to lose sight in any way to determine forcefully and whatever it takes, the CAUSE of death of Teoh Beng Hock and to bring in the murderers, if it is a case of homicide.

FACT: Teoh Beng Hock died in the custody of MACC

".. the DAP set up their own dummy companies, create fake invoice, fake projects and then take the money out. This is stealing, not corruption. But because they abuse their power it is also involving corruption. In the process they leave behind a very long trail of documents and evidence.

Teoh was forced into some unscrupulous dealings. He did not like what he was doing. To protect himself, Teoh made copies of false documents, fictitous public work, and dummy companies. He copied information from his notebook and the office computers into a hard disk and left it with someone. Inside are stack of information detailing the corruption by the DAP in Selangor.

The late Teoh Beng Hock was involved in this scandal also but he was forced by Ean Yong and Ronnie Liu. He did not really like what was happening. To protect himself, Teoh made copies of all the false documents and dummy companies that was set up by the DAP. Teoh left behind a hard disk with someone which contains a stack of information detailing the corruption by the DAP in Selangor.

Till today, his death remains a mystery. Why did he stayed back to sleepover at the MACC after the claimed interrogation ended? He is supposed to register his marriage with his fiance that day.

This blog is established in his rememberance. A young man with ideals, belief, and values caught in a web of political deceipt. The blog is also set-up to cleanse his name. May he be remembered for the right reasons..."
Read here for more

Allegations in the blog related to: 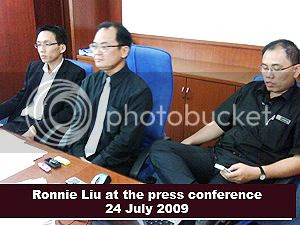 Read here for more in malaysiakini and here in Malaysia Insider

At the press conference today together with Wong Chuan How, Ronnie Liu (DAP Adun for N47, Pandamaran) denied any wrongdoing, adding that the allegations of corruption were baseless. He claims the official records of state fund disbursements were falsified in order to tarnish him and DAP.