Bloodless Plunge ???
Nobody mentioned blood at scene of the plunge. The photos of Teoh show NO spash of blood after a 9 storey plunge. Was Teoh able to break his fall, realised that he was still alive and subsequently died of shock. That would be a mother of all spins. Read here for more on Zorro-Unmasked blog 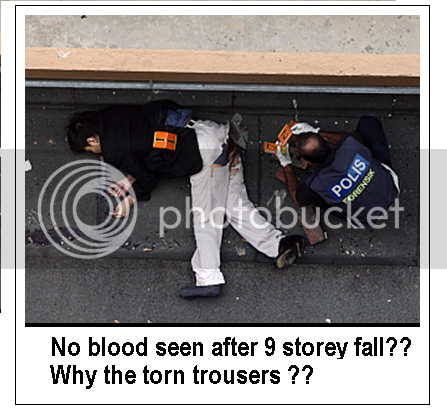 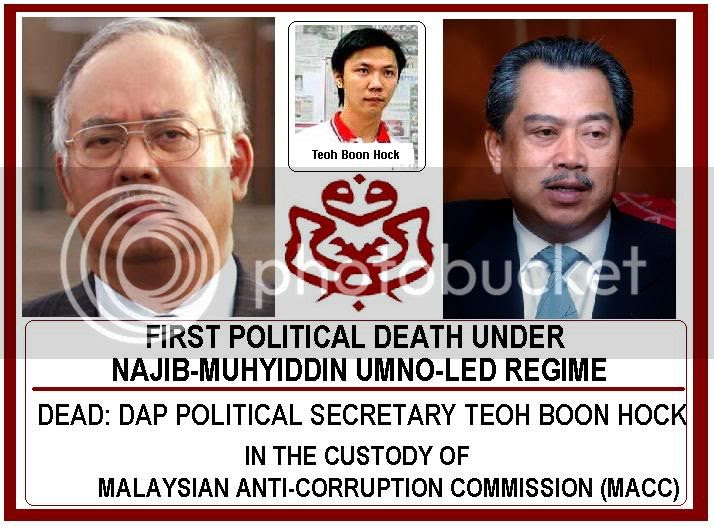 A press conference was held at the KL & Selangor Chinese Assembly Hall this morning.

We, the undersigned civil society groups hereby register our shock, grief and anger at the first political death under the 105-day-old Najib Administration.

Our hearts go out to the fiancée and family of Mr Teo Beng Hock, political secretary of Selangor State Executive Councilor Ean Yong Hian Wah who died falling off the Selangor headquarters of the Malaysian Anti-Corruption Commission (MACC) reportedly on Thursday afternoon, just a day before his planned marriage registration.

(1) the establishment of a Royal Commission of Inquiry to independently and thoroughly investigate the incident and include in its terms of reference the key issue of whether the present command and power structure of MACC has played a role in this tragic incident. Half of the members of the Royal Commission should be nominated by the Federal Opposition to ensure credibility.

(2) that MACC national director Ahmad Said, Selangor Director Moh Samsudin and all officers involved in the investigation of Ean Yong and his fellow lawmakers be immediately suspended until the completion of the Royal Commission’s work to ensure no cover up or obstruction to the investigation.

We are extremely shocked and saddened that politics in Malaysia is not only degrading human freedom and dignity, but has also claimed human life. While many Malaysians have suffered political persecution including detention without trial and torture, no one – to our knowledge – has directly died at the hand of a government institution because of politics since the Kampung Memali incident in 1985.

No blood should be shed because of politics. Even one life lost is too many. Unfortunately, Beng Hock is now the first political death under the Najib Administration and under the MACC, which has joined the police force in causing death in custody.

We, and we are sure, all Malaysians categorically demand call on PM Najib Razak to see to justice being done on Beng Hock’s death.

It was Najib’s failure that he had done nothing in his first 100 days to investigate the allegation by UMNO Maran Division Committee Member Halimi Kamaruzzaman that he was roughed up and forced to strip by MACC officers in a politically-motivated investigation targeting another UMNO politician Norza Zakaria. If that was done, Beng Hock may still be alive now.

Just a week ago, forty civil society groups listed the reform of MACC as one of Najib’s Key Performance Indicators in his second 100 days. It is essential that Najib institutes political reforms to restore democracy and human rights.

A Royal Commission of Inquiry is the only acceptable body that can resolve and bring to a closure the many unanswered questions on the shocking developments leading to and after the death of Beng Hock:

Firstly, isn’t the MACC’s investigation and office raids on Mr Ean Yong and six other Pakatan Rakyat lawmakers in State Assembly over alleged corruption in constituency fund allocation around RM 500,000-600,000 selective and politically motivated? Why have long standing and vastly more serious scandals like that of the RM 12.5 billion PKFZ project and the RM 24-million “Khir Palace” not been pursued with the same enthusiasm and vigour?

Secondly, Beng Hock was interrogated for 10 hours and 45 minutes consecutively from 5pm on Wednesday to 3.45 am Thursday. This was revealed by the MACC Director of Investigation Mohd Shukri Abdul himself. What was the MACC’s motive in interrogating Beng Hock in such an unacceptable sleep-depriving manner that rivals the mental torture at Guantanamo Bay and why was he denied the presence of his counsel?

Thirdly, Beng Hock was then allegedly released and allowed to rest in the lobby of the MACC office. According to Mohd Shukri Abdul, he was still seen by a MACC officer at 6am. Who was this hard working officer who turned up at work at 6am? Why was Beng Hock incommunicado, according to Ean Yong, even after his alleged release? Why did he not drive home after resting?

Fourthly, the MACC refused to confirm Ean Yong of Beng Hock’s death at 4 pm when they claimed to have known about it at 1.30pm. Why? Why did MACC call a press conference only at 5pm, three and a half hours after knowledge of the death?

Fifthly, Beng Hock’s family was first denied access to his body and later given only one and a half hour to bring their own pathologist. What was the logic behind these incomprehensible decisions? Was there anything to hide?

Malaysians are demanding answers to all these questions. The least we must do now is to ensure that justice is done with no cover up whatsoever and with full transparency and credibility.

Minister in the Prime Minister’s Department Mohd Nazri Abdul Aziz should apologize unreservedly to Beng Hock’s family for speculating that Beng Hock had jumped off the building ahead of the conclusion of thorough and unbiased investigation.

We are not interested in the findings to be released from the Polis. We never truwst em anymore. What we are interested is what MACC has to account, in detailed manner, of what transpired between 3.45am up till 1.30pm when the body was found.
The Malaysian rakyat has all the reasons to suspect MACC would collaborate with the Polis (even the pathologist if need be) to exculpate any blame for Teoh's death.
MACC - if he had jumped, it was from within your premises. The rakyat has every right to know. Especially his family. So what do you have to say? Remember, the truth, the whole truth and nothing but the truth.
Let the Polis stay out of this. Including the AG. Neither has earned the trust of the Malaysian people.
malsia1206

I AM SCARE..IT COULD BE NEXT TIME