Manek Urai By-Election: A Vote for PAS is a Vote for Tok Guru Nik Aziz Against UMNO's Bullying and Attempted Bribery of Kelantanese 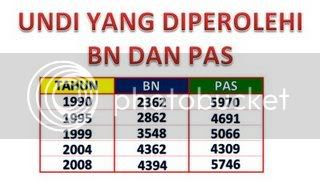 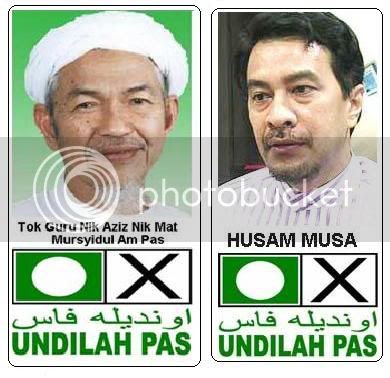 My prediction is PAS will get as near 6,000 votes while UMNO will get around 4000 votes. This time around PAS will have a majority of at least 2000 or more.

Here is my reasoning for thinking so:
Perhaps it is the lurking of this authoritarian ethos which explained the condescension with which UMNO views all its opponents:-

1. Nik Aziz is described as a spiritual leader out of sync with the requirements of a temporal world,

2. That UMNO's man has better qualifications than a fish monger and therefore by extension is a better man.

3. The people of Manek Urai can be easily be wheedled by bullying and backhanders.

What UMNO does to the people of Manek Urai now, is yet a continuation of doing whatever is expedient to achieve its only agenda- self-preservation!

This by election is between a former employee of a federal GLC and an entrepreneur. To be exact, the latter is dismissively termed as a wholesale fishmonger. Ahmad Maslan calls him a peraih ikan- suggesting a negative ring to it. That earned him the wrath of the other fishmongers in Manek Urai. You can bet, UMNO will not be getting votes from this group.

The people of Kelantan and Manek Urai are fiercely entrepreneurial by nature. They have this independent streak in them. From a personal preference standpoint alone, that would place the PAS candidate in consonance with the prevailing psychology.

The biggest mistake is asking the people of Manek Urai to sacrifice Nik Aziz.

I asked an UMNO leader in Kelantan who is feverishly working in this by election, what is the final weapon that you can use?

You can't bribe the Kelantanese with promises of development.

The RM7 million bridge, mosques here and there. Kelantan has yearly revenue of what? 400-500 million a year? After spending on operating expenditure, what amount do you have left to do CAPEX and development?

This is where the federal government plays a role to assist a state which is part of Malaysia. The BN government could have used this role in some smart ways to gain support. If it has not gained support, then you can only conclude that the federal agencies operating in Kelantan have been toeing the officious line. Not good for earning support. Being part of government machinery that is seen as largely discriminatory, actually becomes a disadvantage for Tuan Aziz, our candidate.

You can no longer make threats. You cannot justifiably berate your opponent because he has a different means of making a living. Doing business can easily be claimed as following the Prophet's footsteps. Nabi Muhammad was a businessman before he was made prophet.
Posted by Malaysian Unplug at 04:40:00